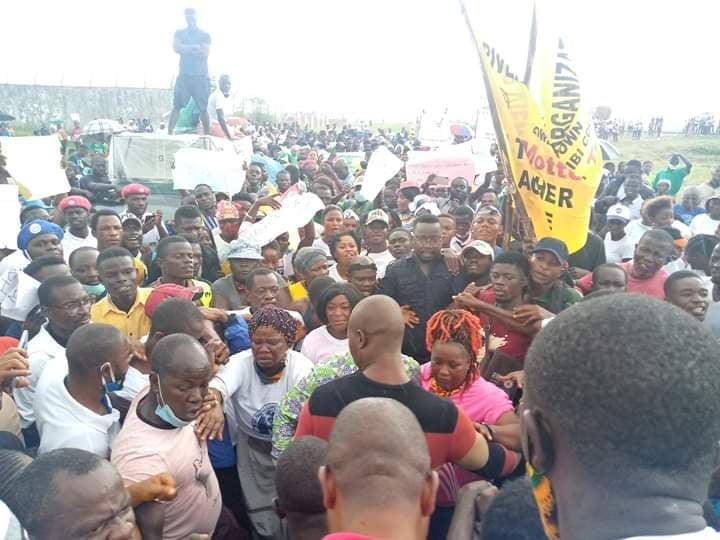 Under the banner of ‘Concerned Margibians for Progress,’ the group was seen waiting for hours to petition the former speaker of the House of Representatives despite a light rainfall and after being told that the director-general was absent from the office.

Comfort Willie, a former official of a workers union for Firestone employees, eventually read a petition to Nuquay after he arrived. She called him a demonstration of selflessness and humanity without a match.

“Today, we gather here in reliance on Article One of the 1986 Liberian Constitution ‘that all power is inherent in the people. All free governments are instituted by their authority and for their benefit and they have the right to alter and reform the same when their safety and happiness so require,’” Willie read. 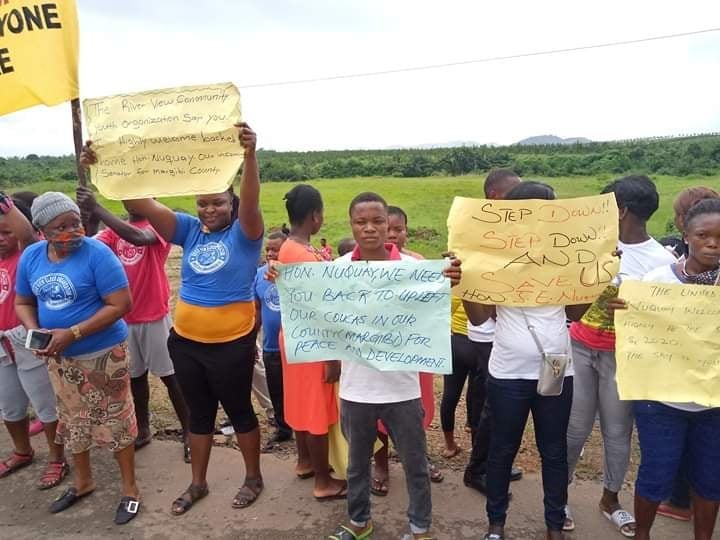 The petition acknowledged Nuquay’s contribution in the county’s sports sector, in the education sector through his provisions of scholarships, his indelible contributions to the health sector of the county through personally paying medical bills for citizens, and his presence in infrastructural development by the numerous public facilities erected by him while he was the highest-earning lawmaker.

“Your selfless desire and action in helping people that you do not know is the greatest testament to your commitment to mankind. In the midst of obstacles, you have demonstrated the milk of human kindness. Your return to the Margibi legislative caucus will no doubt stabilize the unstable caucus,” the statement added.

“Your leadership role is significantly needed in the county as the county seems to be doomed. You’re a brilliant young man, well-schooled in legislative functionaries, and we cannot allow your knowledge to go into oblivion.”

The citizens pledged their support to Nuquay’s candidacy in the name of all political parties, stakeholders, and organizations.

In response, Nuquay thanked the group for their commitment to top-quality leadership for the county and for seeing him as the most preferred citizen to lead at this time.

He acknowledged the request, recounting his achievements as representative of the county’s fifth district and becoming the speaker of the House of Representatives before contesting as a running mate to the former vice president, Joseph Boakai. Although they lost to the Coalition for Democratic Change in the 2017 run-off election, Nuquay said the election was not the end of the world.

“Had I not served well, you could not have been here to request me to go to the Senate. All we have strived for over the years was to bring to you pride and development. During my period of service, I brought [you] the prestigious Ways and Finance Committee for eight years. I also brought to you the speakership of the National Legislature, the third-highest position in the governance structure of the republic. I also came close to delivering the vice presidency of the Republic of Liberia to you, but we are reminded that it was by divine destiny that didn’t happen,” he noted. 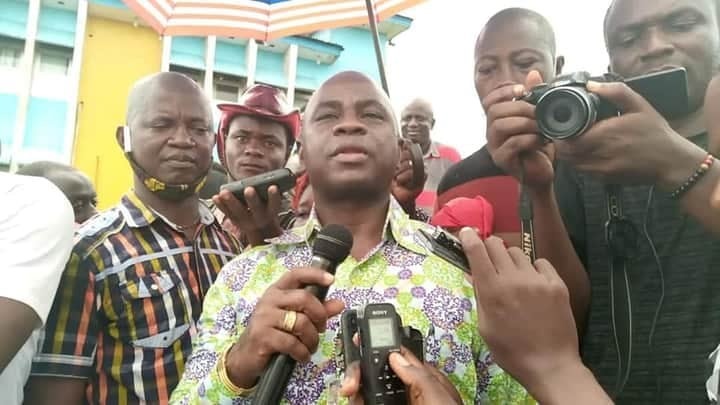 Nuquay told the petitioners that upon losing the 2017 elections, it was President George Weah who reached out to him in the spirit of brotherhood and reconciliation and requested him to serve in his government.

“True to his commitment, he appointed me as the director-general of the Liberia Civil Aviation Authority. I have served in this position for a little over two years now, and at this critical juncture, you have come to request of me to leave his government to come and serve you. As you make this request, I want to make this clear to you. During my period of service with President Weah, he has shown me no ill-way. All he has shown me has been genuine brotherhood, kindness, and respect, I want you to know this. By being human, in the wake of your request, I need to similarly show him – demonstrate to him – brotherhood, kindness, and respect,” he said.

The former lawmaker said he has been receiving numerous requests prior to Thursday’s petition, and he has engaged the president about his dreams for the county. He plans to conclude that discussion in the next few days before making his decision.

Meanwhile, Sheku Sam, who chairs the group of petitioners, told The Bush Chicken that Margibians are desperate for Nuquay, as he is the only one they believe can close their leadership deficit in the Senate.

“Our county lacks adequate leadership and we are looking for someone who will provide the kind of leadership that we are yarning for,” Sam said.