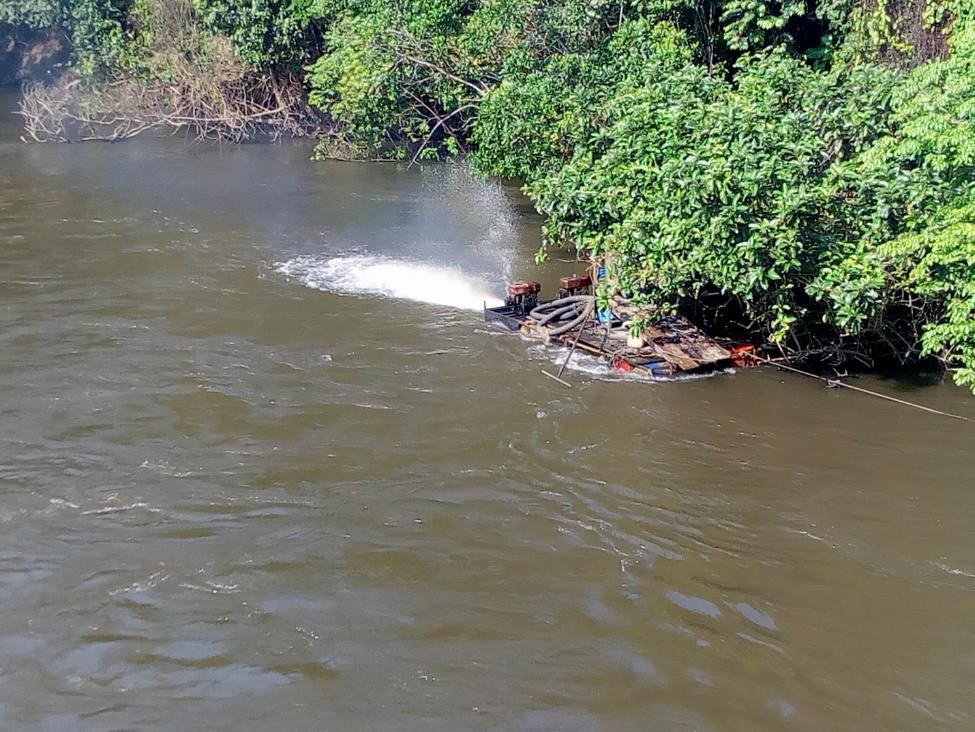 DYEAH TOWN, River Cess – River Cess officials have received L$650,000 (US$3,250) in bribes and gratuities from illegal miners operating in the south-central county. The situation is a typical example of how local and county officials meddle in mining administration—a major challenge in the mining sector for decades.

On April 20, Philip Toby, an administrative assistant in the office of the assistant superintendent for development, received L$240,000 (US$1,200) from miners operating in River Cess. Three Ghanaian miners—Evans Gidisu, Derrick Amoak, and Emmanuel Dordaye—delivered the money on behalf of a group of foreign miners in Yeah Town in Timbo District, according to a handwritten receipt they were issued, seen by The Bush Chicken.

Gidisu, the head of the miners, claimed that they had been ordered by the office superintendent to pay the money. “They told us anyone who will not pay the money will not mine in the area,” Gidisu told The Bush Chicken in a telephone interview. “So we the Ghanaians mining in the area tasked ourselves and paid that money.” 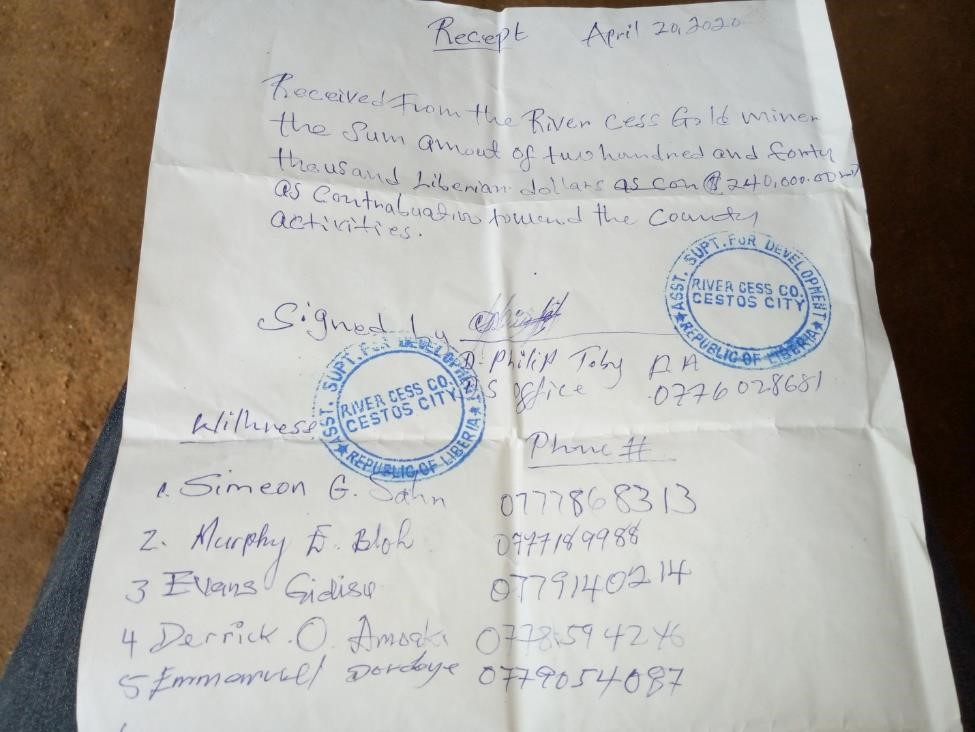 A handwritten receipt given to miners after they paid L$240,000 to River Cess officials as contribution towards the construction of a road in the county. Photo: Eric Opa Doue

Gidisu and his team are illegal miners, as there is no active license holder in the Timbo River district where they are mining. There were 43 Class C mining licenses in River Cess as of October 1, records of the Ministry of Mines and Energy show, though there could be more, as some licenses take a longer time to process. Of this number, 34 are in Beawor, 8 in Sam Gbarlor, and 1 in Nyorwein. Class C licenses are exclusively for Liberians under the Minerals and Mining Law of 2000.

Besides the L$240,000, the superintendent for fiscal affairs, Elijah Kassaynee, admitted that he received another L$200,000 (US$1,000) from other miners in the county as a “contribution” to road rehabilitation of the Cestos-Palm-Bush corridor. The 17-mile stretch of dirt road connects Cestos, the capital of River Cess, to Sinoe.

In June, Forest Venture, a logging company operating in Monweh District, provided earthmovers with the agreement that the county would provide the fuel for the pavement and maintenance of the road. However, the road is yet to be completed, and the company has recalled its equipment.

“Not that we went to them to ask them to give us money,” Kassaynee said. “What happened was that [the county leadership] went on the radio and said we wanted to rehabilitate the Cestos road, and that whoever had contribution should bring it. That’s how the miners gave us that money.”

Kassaynee had previously denied that the county administration was collecting money from miners when they were accused last year by Patrick Wlehduy, an elder of Wesseh Town.

Superintendent Bismark Karbiah also denies receiving fees from the miners. “The county has never received any money from any miner here in River Cess,” Karbiah said. “I have since declared the miners in the county as violators.”

But in December last year, Karbiah appointed Paramount Chief Kofi Zar as chairman of a mining committee to collect fees from miners in the Timbo River area. Zar revealed to The Bush Chicken that he collected over L$90,000 (US$450) from miners. Karbiah later sacked Zah and appointed Emmanuel Gboe, a resident of Cestos, as “mining coordinator” on August 11.

“Please be informed your appointment takes immediate effect upon receipt of this letter,” Gboe’s appointment letter read. “It is expected that you respect the constitution of the Republic of Liberia and abide by the rules and regulations governing all mining activities of the county.”

Dredging is active in River Cess, despite a ban on the use of the machines to curb further environmental damage to waterfronts in rural communities, which depend on them for food and drinking water.

A dredge is seen on the banks of the Cestos River in River Cess, August 18, 2020. Photo: Eric Opa Doue

In ITI, a settlement of former workers of the International Timber Industry, Commissioner Benjamin Bieh is accused of owning a dredge on the Cestos River. Bieh denies that accusation but admits that he has been receiving money from miners in the area to construct his office. He has worked from home since his appointment in 2018.

“I have ordered my secretary to collect L$20,000 [US$100] from each of the 20 miners here in ITI and its surroundings,” Bieh told The Bush Chicken. He disclosed that 12 of the 20 miners in the area had already paid L$10,000 (US$50) and would pay the balance of L$10,000 this month. “I want to construct my office, and government does not have money for that now. So this is the only means I have to generate funds to work on my office.”

Even though records from the Ministry of Mines and Energy show no licenses in Timbo, there are currently three mines in different towns: Morris Town, Dyeah, and Vonyee.

Morris Konneh operates dredges in Vonyee Town. He claims he owns a mining claim in the area, but the records show that he holds and shares five Class C licenses only in Montserrado, Gbarpolu, and Grand Bassa. He has no legal mining claim anywhere in River Cess.

Since the beginning of this year, mining activities have increased in River Cess. Dozens of Ghanaian miners are seen on the Cestos and Timbo Rivers, but local officials in the area deny that dredging is ongoing there. On August 18, this reporter photographed a dredge on the Cestos River, about 10 yards away from the home of Bieh.

Five days later, on August 23, Assistant Minister for Mines Emmanuel Swen arrested four Ghanaian miners in Yarnee District and destroyed several dredges. These miners were carrying on dredge mining on the Cestos River in Sam Gbalor District and some are now on the run. No further arrests have been made.

This story was a collaboration with New Narratives as part of the Excellence in Extractives Reporting Project. The German Development Cooperation provided funding. The Funder had no say in the story’s content.

Sharing
Tags Elijah Kassaynee, Ministry of Mines and Energy
Contributions to The Bush Chicken are not tax deductible.