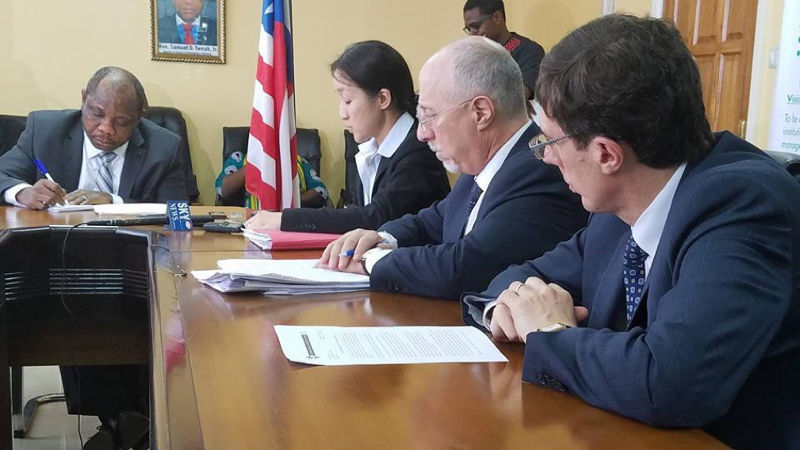 MONROVIA, Montserrado â€“ The Head of Delegation of the International Monetary Fund to Liberia, Mika Saito, has predicted that Liberiaâ€™s economy is poised for recovery following a difficult period.

Saito made the statement at a joint news conference held on Tuesday, March 20, 2018, at the Ministry of Finance and Development Planning in Monrovia.

Saito said over the last five years, Liberia had experienced a series of events that interrupted its economic growth, including the Ebola crisis, the significant decrease in the price of rubber and iron ore on the world market, the ongoing withdrawal of the U.N. peacekeeping force, and the disruption associated with the 2017 elections.

She said growth bottomed out in 2016 at negative 1.6 percent, before increasing to 2.5 percent in 2017. Those factors, she said, also contributed to the reduction of net foreign exchange inflow over the past year, which she said put pressure on the exchange rate and has exacerbated inflation since January 2017, resulting in the exchange rate depreciating by 28 percent.

The head of the IMF delegation noted that the depreciation drove inflation at 14 percent, which remains at a relatively elevated level, adding that the reduction of foreign exchange also put pressure on reserves of the Central Bank of Liberia.

â€œWith the economic shocks and the Ebola crisis now in the past, assuming the implementation of good policies, including measures to improve the business climate and support private sector development, the medium-term outlook appears favorable,â€ she said.

She emphasized that the peaceful political transition will offer support to the recovery of the domestic economy, including the agriculture and service sectors, through improved consumer and investor confidence.

â€œKey commodity sectors are expected to be more active as global commodity price recovers,â€ she said. Saito added that better power supply coming from the Mount Coffee Hydropower Plant would be a positive development for new businesses if the Liberia Electricity Corporation can resolve its â€œtransmission bottlenecks.â€

She said their mission supports the governmentâ€™s â€˜Pro-Poor Agenda,â€™ adding that there is a need to increase investment spending at a time when resource mobilization from external borrowing, domestic revenue generation, and aid is facing challenges.

As Liberiaâ€™s debt levels have been rising steadily in recent years, she cautioned the government to undertake future obligations with caution, specifically concerning securing loans with favorable terms and conditions.

Saito said Liberiaâ€™s domestic revenue generation is relatively low by regional standards and improving income in that area will be essential for expanding investment spending over the medium term.

She added that while aid coming into the country remains substantial, it is on a decline from the excessive levels of the post-conflict and Ebola emergency periods.

â€œGiven these potential constraints on the resource mobilization, it will be important to not only mobilize significant quantities of additional domestic revenue and secure attractive terms for future contracted debt, but also to improve the efficiency of existing spending to create additional fiscal space,â€ Saito said. â€œGovernance improvements, particularly with respect to inculcating greater fiscal transparency and accountability, would be key in this, as it would instill greater order and priority in governmentâ€™s fiscal relation.â€

â€œReplacing development spending with current expenditure to the extent possible would need to be part of this, including by controlling growth of the wage bill,â€ she added. â€œGovernment could also usefully consider adopting a comprehensive program to clear domestic arrears and prevent the emergence of new ones, utilizing realistic revenue estimates for budget formulation and improving the monitoring of all expenditure, including grant and loan-financed projects.â€

Also speaking was the minister of finance and development planning, Samuel Tweah, who noted that government is keen on improving key areas in generating revenue to maintain its operations.

According to him, the major concerns for government is to provide electricity for all Liberians, create empowerment through job creation, and invest in agriculture by focusing mainly on the production of rice and cassava.

He noted that education is another key area they will invest in to maintain the growth and development of the country. He said job creation and investing in the private sector will not only help create more jobs but will serve as a generation of revenue for the country.

Tweah said there are risks associated with these plans; however, he believes the government can manage these risks.