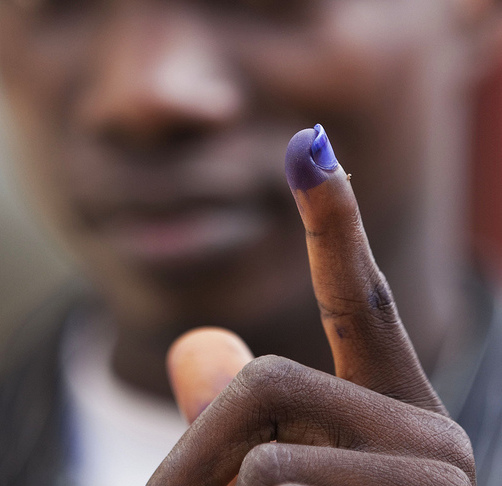 MONROVIA, Montserrado â€“ On January 22, Liberia experienced its first handover of power from one elected leader to another in 73 years. Pres. George Weahâ€™s inauguration followed a historic election that saw a loser in a presidential race accept the results and concede defeat to the winner for the first time in many years.

Despite reports of isolated cases of electoral fraud, both the first and second round of the elections were generally certified as calm and orderly by the National Elections Commission and international observer missions, although the December 26 runoff election was marked by significant improvements.

However, the elections exposed weak points in Liberiaâ€™s electoral system. For one, a prolonged legal battle after the first round of elections created fears that there would not be enough time to hold a runoff election and inaugurate the new president within the timeframe required by the constitution.

Liberty Partyâ€™s Charles Brumskine case against the National Elections Commission did not only prompt a need to reconsider the constitutional timeline for elections. It also drew attention to the data within NECâ€™s voter roll, which contained duplicate data and other symptoms of a database that had not been subjected to rigorous data quality requirements.

These fault lines were noticeable to many observer missions which proffered recommendations to improve future elections. Among these groups were the Elections Coordinating Committee, a consortium of civil society organizations working on the elections. The ECC had the highest number of local observers.

International observer missions led by organizations such as the Carter Center, the European Union, the African Union, ECOWAS, and the National Democratic Institute also put forth recommendations for electoral reform.

Many observer missions identified the potential that the existing elections timeline could cause a constitutional crisis or be adversely affected by the rainy season as one of the most serious electoral reform topics.

The ECC summarized this particular recommendation best: â€œThe Constitution should not indicate a specific Election Day, but it should give a timeframe that allows for flexibility to react upon political developments, to respond to electoral petitions in a timely and impartial manner, and other emergencies such as the 2014 Ebola health crisis. The specifics of election timeline should be elaborated in the electoral law and ensure that current inconsistencies and conflicting deadlines are eliminated.â€

If Liberia is to reform its election laws and regulations before the next regular elections, the country must begin now by tackling manageable issues. However, the recommendation to change the constitutional timeframe for elections and other recommendations requiring a change to the constitution are unlikely to be acted upon within the next year, given the prolonged nature of Liberiaâ€™s ongoing constitutional review process.

The process began in 2012, led by the Constitution Review Committee, and a final report was presented to former president Ellen Johnson Sirleaf in 2015. Those proposed amendments were subsequently presented to the legislature. However, since then, progress has stalled.

The reforms that are likely to take place within the next 12 months will be changes to laws and regulations.

All the observers except the ECC recognized the need for a change in the elections law to ensure that women had better representation.

The elections law provides that political parties and coalitions submitting candidates for an election should â€œendeavorâ€ to ensure that there is no less than 30 percent of candidates from each gender. That vague language meant that the law would be difficult to enforce, and no political party met the gender requirement.

After the nomination period ended and the preliminary list of candidates showed that only 15.71 percent of candidates were women, Henry B. Flomo, who was NECâ€™s director of communication, said the commission could not do much. Although the Amended Elections Law of 2014 states that political parties should endeavor to ensure that the governing body and its list of candidates have no less than 30 percent of its members from each gender, he said NEC cannot enforce the rule because all parties needed to do was to show that they were trying to ensure that they met the threshold.

Flomo said several political parties could not meet up with the minimum requirement of 30 percent gender balance and had explained their situation to NEC.

Nathaniel McGill, who was then the chairman of the Coalition for Democratic Change, said the coalition tried to have more female aspirants but â€œthe females are not making themselves available.â€

According to McGill, CDC, which had only 12.96 percent of females on their tickets, faced many challenges in getting women to contest positions, but the party â€œdoes not know the reason for which females are not coming forward to participate in the elections.â€

McGill explained that CDC allotted several vacancies to women on the partyâ€™s ticket to contest, pointing out â€œthe problem is not with the CDC but rather the women that are not showing any interest to contest the elections.â€

He said CDC had done everything possible to have more females contest on the partyâ€™s ticket but to no avail. He said a â€œmajority of the women were contesting the partyâ€™s primary in one cluster district, which could only be won by one person.â€

Out of a total of 1,026 individuals qualified as candidates to contest in the October elections, only 163 were females, constituting 15.9 percent. Only nine females, including five incumbents, were elected to the House of Representatives out of a total of 73 members.

The observers called on the legislature to strengthen the language of the elections law to ensure that there was more representation for women. The European Unionâ€™s mission went further and called for â€œcapacity building for prospective female candidates and measures for higher integration of women in political parties throughout the electoral cycle.â€

The international observers also recognized the need for change to the voter registration system. They recommended using the nascent National Identification Registry for NEC to use in obtaining its voter roll. The European Unionâ€™s mission emphasized the need for this system to be passive as a means of â€œenhancing participation in elections and addressing uncertainties inherent to active voter registration.â€

With the current system, NEC sets a limited period before each election for voters to register. Unlike with the National ID cards, current voter registration cards are handwritten, and individualsâ€™ biometrics are not captured and stored electronically. Moreover, because of the limited timeframe, and because of the manual nature of the work to create the voter ID cards, there is a higher chance for errors or mistakes. It is also easier to forge the cards.

While this was not one of the recommendations included in the ECC report, its chairman, Oscar Bloh, wrote in an email to The Bush Chicken where he agreed that voter registration should be ongoing. He said NEC should explore the opportunity to leverage the database at the National Identification Registry. In addition to the quality control benefits, he said this would contribute immensely to reducing the cost of holding elections.

The African Unionâ€™s report highlighted the need for public funding of political parties to promote a level playing field. Bloh, the ECCâ€™s chair, agreed with the recommendation.

There have been at least two attempts to pass laws mandating public funding of political parties in Liberia. However, all past efforts have been unsuccessful. In 2011, former president Ellen Johnson Sirleaf vetoed one attempt to allocate US$4.8 million annually to political parties based on the performance in past elections. Such attempts also tend to be largely unpopular with the public.

Much of the recommendations suggested by the ECC were proposed changes to the way NEC operates. The ECC wants the number of commissioners reduced from seven to five. It noted that this should not impact NECâ€™s operations given that the conduct of the election is managed by technicians and that five commissioners were enough to implement laws, policies, and regulations governing elections.

In its recommendations, the ECC also calls for commissioners to be appointed through a public vetting process or in consultation with political parties and civil society organizations and not just solely by the president with the consent of the Senate. According to the ECCâ€™s Bloh, too much power is currently vested in the president to appoint commissioners.

Moreover, the ECC called for the tenure of NECâ€™s commissioners to be reduced from seven to five years. Additionally, the group also wants the elections law to be amended to reflect that five commissioners can make a quorum, and providing that there can be a quorum even in the absence of the chair of the commission, as the co-chair should be allowed to act.

Bloh said he believes that many of these recommendations that do not require the constitution to be changed can correct the challenges of the past election if carefully reviewed. This iterative process can then lead to a stronger democracy.

This article is the first of four in a series on electoral reform. It is published by The Bush Chicken through the support of Internews.Â Read articles two, three, and four.