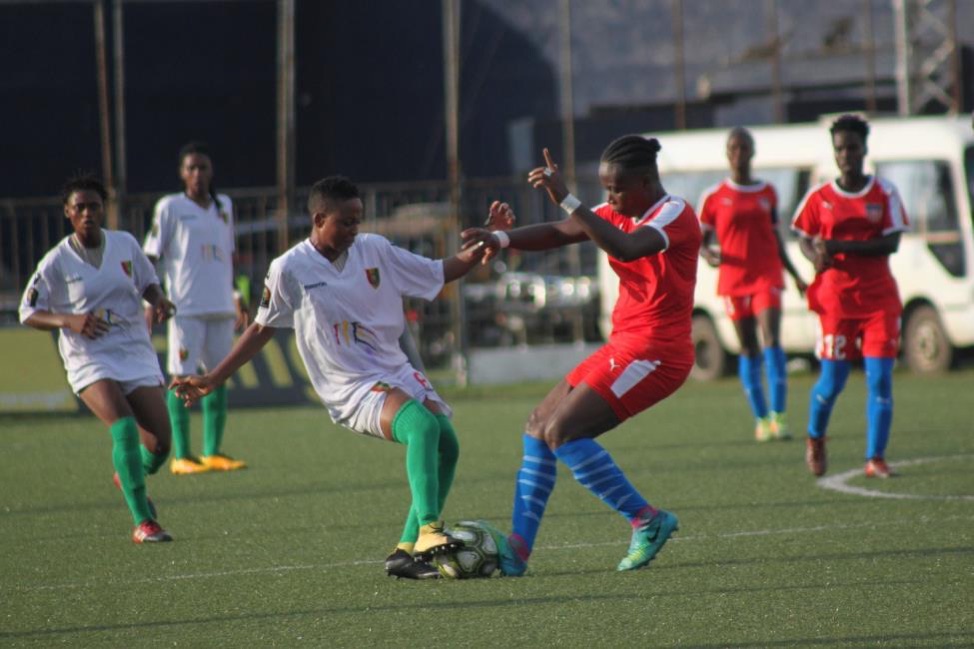 MONROVIA, Montserrado â€“ In an international women’s friendly in Monrovia, Liberiaâ€™s women senior football squad was held to a 3-3 draw with Guinea at the Antoinette Tubman Stadium in Monrovia on Sunday, November 24.

The game was the first international friendly the womenâ€™s side has played in four years, and the first female international game on home soil since the U20 team hosted Nigeria in 2015, in the 2016 FIFA U20 Women’s World Cup qualifier.

It was clear the Liberian side lacked much international exposure, as a majority of the players are yet to play internationally. Therefore, there were little hopes for a win.

But the Lone Star ladies didn’t disappoint their fans. They put up a strong play to secure a 3-3 draw in a match that proved as entertaining as it was satisfactory.

Two goals from Lucy Massaquoi and a goal from Paulinho Agbotsu earned the team a draw. The Guinean side secured their goals through Hawah Conte and
Bountou Sylla. 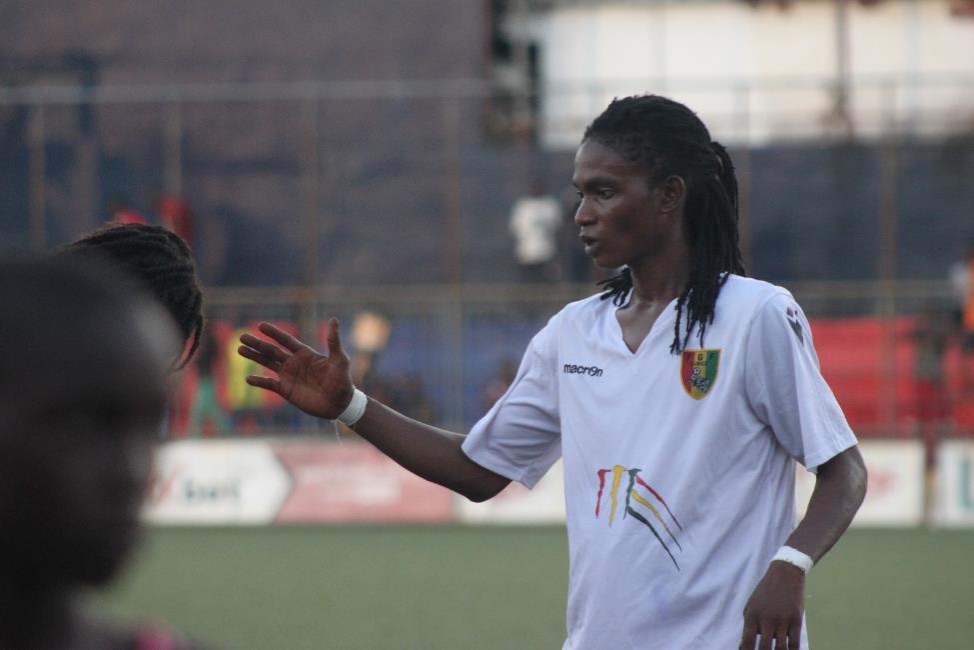 The opening minutes of the match were terrible for the Liberian side, as they appeared to lose concentration, giving Guinea the chance to dominate the game in ball possession.

It wasnâ€™t long till the Guineans netted their first goal, to thunderous applause from their fans. Nine minutes after kickoff time, the Guinean star player, Hawah Conte, dribbled Liberiaâ€™s Massa Kanneh to get a curtain-raiser.

For the next 21 minutes, Guinea enjoyed the lead. But when Liberiaâ€™s first goal came, it was in style.

Paulinho Agbotsu, who had made some tricky moves in Guinea’s defense, got things leveled with a shot from within the penalty area, after making her way past three defenders.

The Determine Girls Football Club’s forward got the score leveled, thus introducing new levels of excitement into the match, and on the faces of Liberian fans at the stadium. Two goals in 30 minutes of play, both teams played beautifully, presenting spectacular entertainment in the first half of the match.

But in only ten minutes following Liberiaâ€™s celebrated equalizer, Guinea took the lead once more. Bountou Sylla seized upon a sluggish play by Massa Konneh to score Guinea’s second goal.

Konneh ran off her box to clear a ball, which was quickly possessed by Sylla. Sylla then struck unmistakably for the back of the net.

With only seven minutes to the end of the first half, the Liberian side came under pressure for another equalizer. The search for the second equalizer came in the 45th minute through Lucy Massaquoi.

Massaquoi, who is also a prolific kickballer, basketballer, and a gold, silver, and bronze medalist for Liberia in athletics, headed in Angeline Kieh’s cross from a set-piece just at the stroke of half time.

Massaquoiâ€™s goal re-enthused the Liberian side and its fans, restoring hope once again for a win. 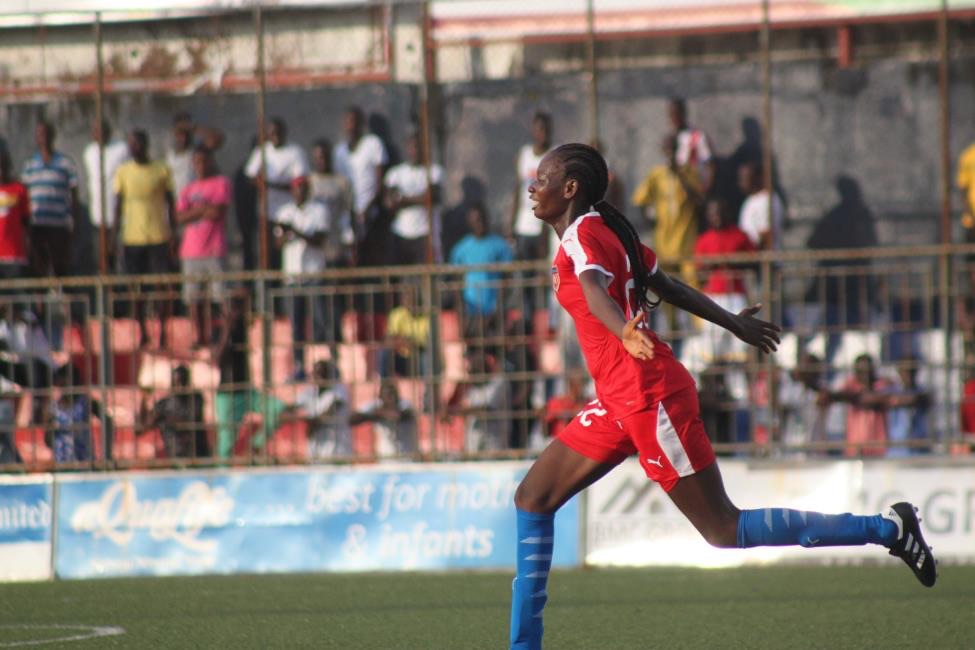 The two sides went into the dressing room with two goals apiece and returned to the prospect of more exciting football in the second half.

Only five minutes into the second half, and Guinea got its third goal from another sluggish move by Massa Konneh, giving Hawa Conte another goal. Just like her first-half misstep, Konneh came out of her goalposts to clear a ball that landed on the foot of Conte. Conte registered her name on the score sheet for the second time in the match and Liberia began the search for a third equalizer.

Agatha Nimene, who was a surprise omission from the starting lineup, came in for Bernice Williams upfront as Dean went hunting for a third goal and equalizer. Nimene introduced spice and dynamism on the Liberian side that kept the Guinean defense constantly engaged.

However, Liberia was unable to get the score leveled until the 67th minute when Lucy Massaquoi got her second chance from another Angeline Kieh’s assist. Kieh’s cross from a set-piece landed on the head of Massaquoi, who wasted no time in transforming the header into the priceless moment of Liberiaâ€™s final equalizer.

In the remaining 23 minutes of the match, both sides remained hopeful for a winning goal. Each attempted several strikes against their opponent, but no goal was forthcoming until the end of the match, giving the Liberian home side a draw they can live with.

The Lone Star ladies may have failed to clinch a home win, but their performance pleased their adoring fans who turned up in record numbers despite limited expectations for a win.

With time and preparation, this team promises to go very far.

about 1 hour ago by Eric Doue