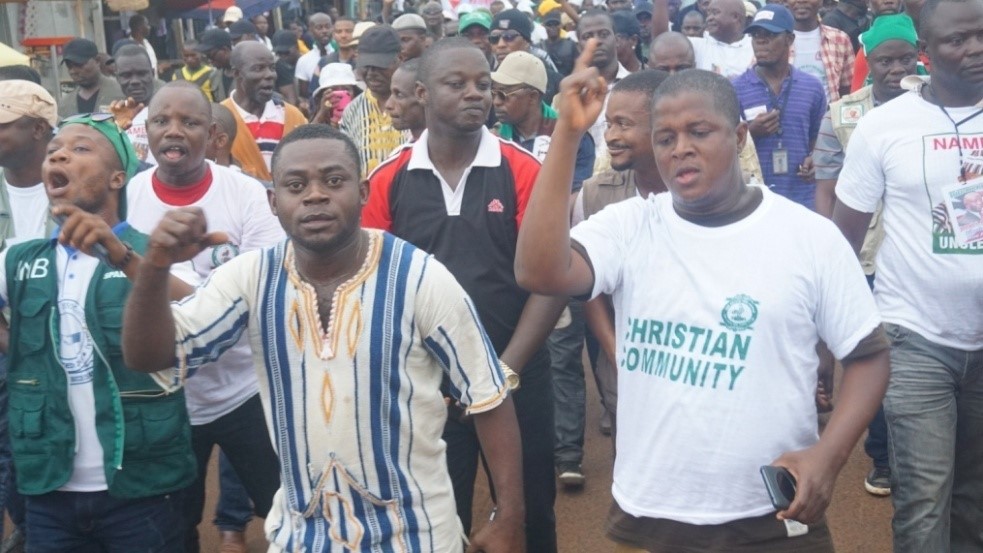 GBEH-FLENDIN, Nimba â€“ Unity Party and Liberty Party are in a war of words in Nimba as the ruling party has accused Liberty Party â€˜foot soldiersâ€™ of intimidating voters by collecting voter registration numbers. Liberty Party contends that the practice is simply meant to track its door-to-door outreach campaign.

Several days ago, Unity Party candidate Roger Domah accused Liberty Party of coercing voters by taking down their voter registration card and center numbers in Gbeh-Flendin, in Nimbaâ€™s seventh district, where Domah is also running to become a lawmaker.

Domah said when he discovered the practice, he raised an alarm, prompting the attention of the townâ€™s authorities, who interrogated the individual collecting the information.

When authorities decided that he could not properly explain why he was conducting this exercise, they asked him to delete all the photos of voter cards he had taken with his phone.

During a press conference in the town, residents confirmed Domahâ€™s account.

However, Liberty Partyâ€™s national vice chairman for membership, recruitment, and mobilization sees no problem with the practice.

â€œThe Unity Party candidate in district seven, Brother Roger Domah, does not have the information and he has sadly transformed himself into a marketer of misinformation,â€ Teeko Yorlay said during an interview on the Voice of Gompa.

Yorlay said Liberty Party had recruited over 500 â€˜foot soldiersâ€™ in Nimba, and dispatched them throughout the county to conduct a â€˜Jehovah Witnessâ€™ campaign aimed at securing victory for the party.

â€œWe have given these young people the instruction to go from community to community, [and] talk to at least 200 persons each and as they engage those people, to show that they have spoken to voters,â€ he said. â€œThey must take the voter card registration number [and] the center number of those voters as a proof of the fact that they indeedâ€¦ carried on the task.â€

Yorlay noted that the exercise is not limited to Nimba alone. He said, over 5,000 young people had also been recruited in Montserrado and charged with a similar mandate.

He said Unity Party was raising alarm about this practice because it had â€œfallen short of strategy to be able to recruit and convince the people, therefore when people do that, it is an issue.â€

The Bush Chicken sought clarity from the National Election Commission about the legality of the practice but Communications Director Bobby Livingstone said the commission could not yet determine whether or not the practice is legal. He further noted that no one had formally brought the issue to his agency.