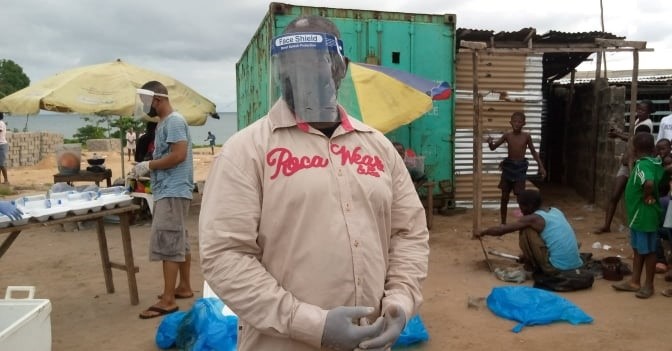 PAYNESVILLE, Montserrado – Residents of Nagbe’s Town in Paynesville are noticing an uptick in break-ins and armed robbery within their community after the police inspector general, Patrick Sudue, launched a feeding program for substance abusers and petty criminals commonly known as ‘zogos.’

The residents complain that the program, which is Sudue’s personal initiative, attracts criminals from other communities who wait in the community to receive food from him. Once they are in Nagbe’s Town after 3:00 p.m., they can no longer move around due to the nationwide curfew. Residents say the zogos terrorize them at night while they are asleep.

On Sunday at around 3:00 a.m., another home in the community was broken into by criminals who made their way with more than US$300 and valuable items [Disclosure: This is the home of the reporter]. This was the third time the home had been broken into, although the culprits were more successful on this occasion than others. During the previous instances, light bulbs around the house and phones were stolen.

The owners of at least four other homes in the community reported that they had recently been burglarized too. Additionally, two persons complained that they were hijacked at night and their phones were taken away.

Boimah Fahnbulleh, who lives in the community, told The Bush Chicken that although the occasional crimes occurred in Nagbe’s Town, they did not occur as frequently. He fumed that as the community was deciding on forming a vigilante team to deter criminals in the community, the head of the Liberia National Police was feeding zogos living in Zimbabwe, the name of an abandoned building in the community that shelters many homeless substance abusers.

Empowering the zogos, Fahnbulleh said, has increased their numbers and threats on peaceful residents.

“Just imagine, those that should back us are the one bringing food for these guys. How will it look like,” he said. “We are appealing to the government to find reason to come to our aid. I am very, very disappointed in the police director.”

Philip Gongloe, who also lives in the community, said he was surprised by Sudue’s role in feeding criminals, instead of stopping them from harassing peaceful citizens.

“If there are criminal activities, it’s the police that’s supposed to rescue this community. But if the director, who’s supposed to send manpower to come and rescue the community, is feeding criminals, who do we turn to?” he said.

“Just yesterday, the guys threatened the community, saying, ‘The director is feeding us now. You people were talking about putting together a vigilante team to come on us, let’s see any man. We will kill your – that your children will bury y’all.’”

Gongloe called on President George Weah to take action against the head of police for ‘sanctioning’ criminal activities in the community. He also encouraged lawmakers to use their oversight responsibility to Sudue for questioning. He further recommended that the abandoned building be broken down.

Another community member, Moses Miller, also supported the idea of breaking down Zimbabwe. He saw the facility as a hideout for criminals.

When contacted, Sudue did not directly address the plight of the community but said the situation of the disadvantaged youths is not unique to Liberia, and that homeless individuals are found all around the world, including in the United States.

He said his initiative was meant to ensure that the zogos were not hungry during the period of the lockdown, amid restrictions on moving around to fetch food.

“If these guys are cared for [and] they are placed in shelter homes they are rehabilitated, they can become very good citizens. It’s all they don’t have, that is why you find them doing what they’re not supposed to do,” he said.

“Even though we’re fighting crime, but that’s my way of talking to them. Because, after you feed these guys, you talk to them, you listen to their plights, many of them will tell you that if people come to our aid, we will leave the street. So, I’m doing this to help them and tomorrow they can listen to me. We know we have to enforce the law, but in enforcing the law you have to be compassionate.”

Sudue said enforcement of the law does not only mean arresting and detaining criminals: “I’m in the counseling business. Don’t forget, I earned my master’s degree in conflict, peace, and security. So, this is the peace aspect I am carrying on. If you help these guys, you are helping the national security, also.”

The inspector general believes that while feeding will not take the disadvantaged youths off the streets, a holistic approach can combat crimes, including the start of a sustainable rehabilitation program.