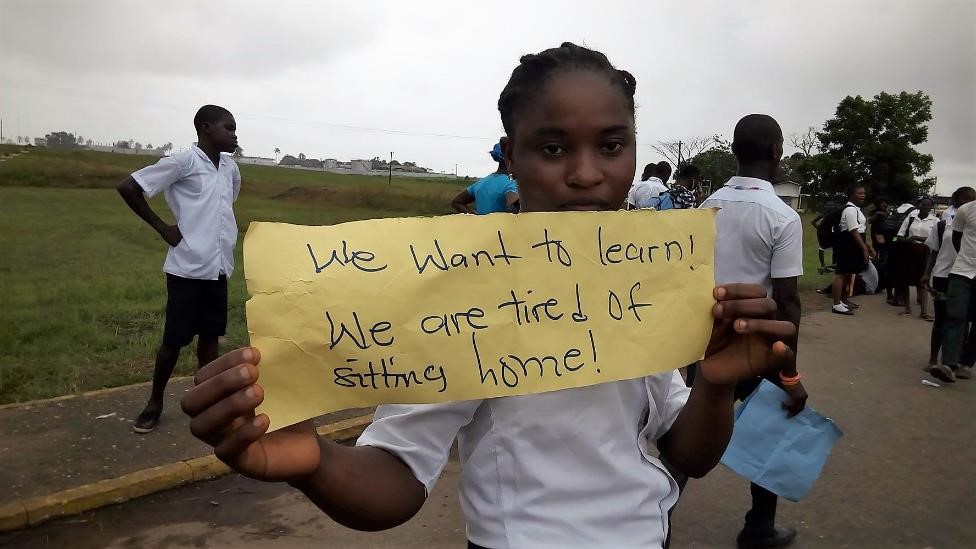 KAKATA, Margibi â€“ Several public school administrators in Margibi have been dismissed by the Ministry of Education in response to the recent student protests in the county.

Those affected include the principals of the Harbel Multilateral High School, Beevaye Myers Mortee; and the principal of the Dolo Town Public School, Tubman K. Snawolo.

An education stakeholder who spoke anonymously said a total of 15 public school administrators in the county were affected.

â€œNo administrator of R.S. Caulfield, RIA, and Peter Town Public Schools was affected by the dismissal action,â€ the source clarified.

One of the affected principals, who would also only speak on condition of anonymity, has confirmed the report but said the action was political.

The principal said the group of affected administrators has however agreed to reserve making comments on their dismissal in public until Monday when they will officially address the public.

â€œBy that time, we would have also resolved on our decisions and course of action,â€ the principal said.

Students from public schools in Lower Margibi, including Harbel Multilateral High School, Robert Stanley Caulfield Public School, and the Dolo Town, Peter Town, and Roberts International Airport Public Schools, staged a protest on September 27 at the intersection connecting Roberts International Airport, the highway to Monrovia, and the road to Firestone. They were protesting the absence of their teachers in the classroom.

They set up road blocks, preventing vehicle movements to and from the airport, Monrovia, and Firestone.

Public schools in Kakata had also staged a similar protest on September 26.

Margibi Superintendent John Buway said the eight window glasses at the Margibi Service Center and some chairs in the countyâ€™s conference hall were also destroyed as a result of the protest. Traffic created on the road to Harbel as a result of the protests. Photo: Gbatemah Senah.

President Ellen Johnson Sirleaf, upon arrival from the United States on September 28, threatened to close down schools that participated in the demonstrations. She spoke while still at the Roberts International Airport.

She said the Ministry of Education would launch an immediate investigation into the matter and any teacher found linked to the studentsâ€™ action would also be dismissed. The president characterized the actions of the students as â€˜ruthlessâ€™ and â€˜unacceptable.â€™

Education authorities within the county have remained tightlipped on the dismissal reports.

Gormah Mineen, the county education officer of Margibi, who represents the Ministry of Education in the county, told The Bush Chicken that she had no information about the report.

Already, some of the administrators have been immediately replaced by the ministry.

Jimmy Keyan, the vice principal for administration at the Harbel Multilateral High School, confirmed receiving a letter of assignment from the ministry on Thursday as the new principal of the school.

Keyan holds a masterâ€™s degree in banking and finance from the University of Liberiaâ€™s graduate school. He had served the school as a classroom teacher for more than four years before being appointed as vice principal.

While local education officials remained reluctant to comment, the minister of education, George Werner, confirmed the action. He said he is not aware of the total number of persons that were dismissed, but those affected were found culpable of participating in the protests following an investigation.

“Anybody who violated the public peace and brought students to the streets must be dismissed,” he said.

He said the dismissal was in line with a mandate by Sirleaf after the dismissed personnel reportedly instigated protest by students.