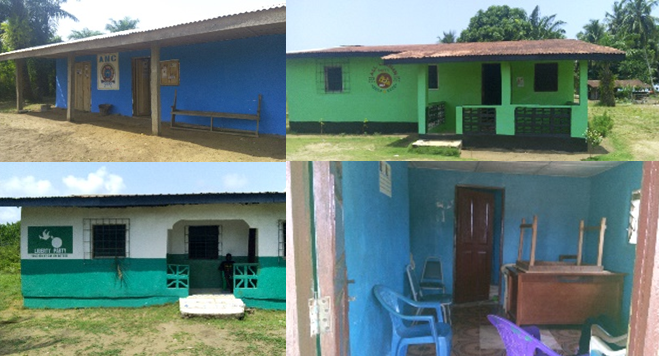 CESTOS, River Cess â€“ If Liberian political parties consider River Cess to be a scene worth competing in, it is not apparent from the sight at the local offices of the various parties, which are characterized by empty and closed buildings.

When a political leader of a particular party visits the county, it is often the case that the partyâ€™s office suddenly becomes busy, but after the event, the doors are shut until another event.

This has been the scope of operation for nearly all of the political parties in the county, even though there are party executives assigned at these offices.

Some of the buildings being used by these political parties are well painted on the exterior while the interiors are often unfinished and remained unfurnished.

At some of the partiesâ€™ offices, security guards visit every day to open the doors and hoist the flag on the pole. They then leave and return to lock the doors in the evening.

All these occurrences were discovered by The Bush Chicken during a recent two-day tour in Cestos on Monday and Tuesday, April 10 and 11.

During a recent two-day weekday tour of Cestos, the office for the Alternative National Congress could be seen opened with the flag hoisted, but there was no one there to talk to. The buildingâ€™s exterior is well painted and decorated with the partyâ€™s name and logo, but inside, there was no furniture and the walls were not painted. ANC County Chairman James Tarr told The Bush Chicken that the office had been closed because of internal leadership crisis within the party at the county level.

“We are always open, it’s just that we had a problem these few days,” Tarr said. Some members of the party said they did not want me, the county chairman, but this has been resolved.”

For the Liberty Party, a man identified as Abraham Smith who claimed to be a security guard assigned at the headquarters told The Bush Chicken that there had been no activities since the partyâ€™s standard bearer Charles Brumskine left the county on March 25.

“Since the counselor left from here, nobody can come here,” Smith said. “I can only come here in the morning and open the door. I stay around small, then I go home.”

A woman who claimed to be the â€œcounty chair ladyâ€ of Benoni Urey’s All Liberian Party was seen laying on the floor of the party office. She told The Bush Chicken that the countyâ€™s chairman was not around and she was waiting for the caretakers.

â€œOur chairman is not here, he said some people [are] coming here. That’s why I’m here,” she said. â€œThe boys who can sleep here have just left. They will soon be here.” Daniel Tokoe, the county chairman of the National Patriotic Party, which recently joined the Congress for Democratic Change and other smaller opposition parties to field a joint ticket under the banner of the Coalition for Democratic Change, said he has always been around. Tokoe said he had been running an errand during The Bush Chickenâ€™s two visits to the office.

â€œI’m always at the office,â€ he said. â€œMaybe when you went there [and] I went somewhere and you did not meet me there. The office is always open and we are always there.”

The offices of the Movement for Economic Empowerment and the ruling Unity Party were both closed, along with that of the Congress for Democratic Change. All three offices had no one available to talk to.

Bobby Liberty, the youth chairman of the United People’s Party, noted that his partyâ€™s office was sometimes open, but not all of the time.

“We open almost every day, but our office in Monrovia is the one to make us open every day,” Liberty said. “Secondly it is not yet campaign time, so we come here in the morning and get membership forms distribute them and leave.”