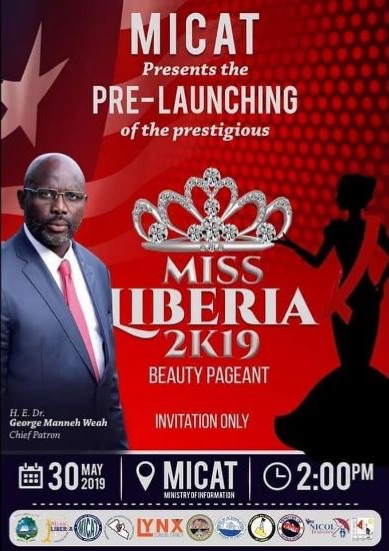 MONROVIA, Montserrado â€“ Liberiaâ€™s Ministry of Information Culture and Tourism has announced that the Miss Liberia 2019 Organizing Committee has been dissolved.

A press statement dated Monday, May 27 and signed by Boakai M. Fofana, the deputy information minister for technical services, said Information Minister Eugene Nagbe had also suspended all preparatory activities leading up to the hosting of the event.

â€œThe annual affair, which is held under the auspices of the ministry, was due to be hosted later this year,â€ the press statement noted.

Nagbe was quoted as saying that would-be contestants who incurred expenses as a result of their engagement with the committee and other stakeholders who made contributions would be reimbursed.

The dissolution of the organizing committee comes as a flyer had been distributed across social media for a â€œpre-launchingâ€ program that featured the image of President George Weah, prompting ridicules from the public that the president â€“ who has been given honorary doctorates by two local universities â€“ wanted to seek even more titles, including the Miss Liberia title.

The Information Ministry called on the public to disregard the previously released promotional materials, particularly those bearing the presidentâ€™s photograph.

â€œThey were neither authorized or approved by the ministry,â€ the press release noted.