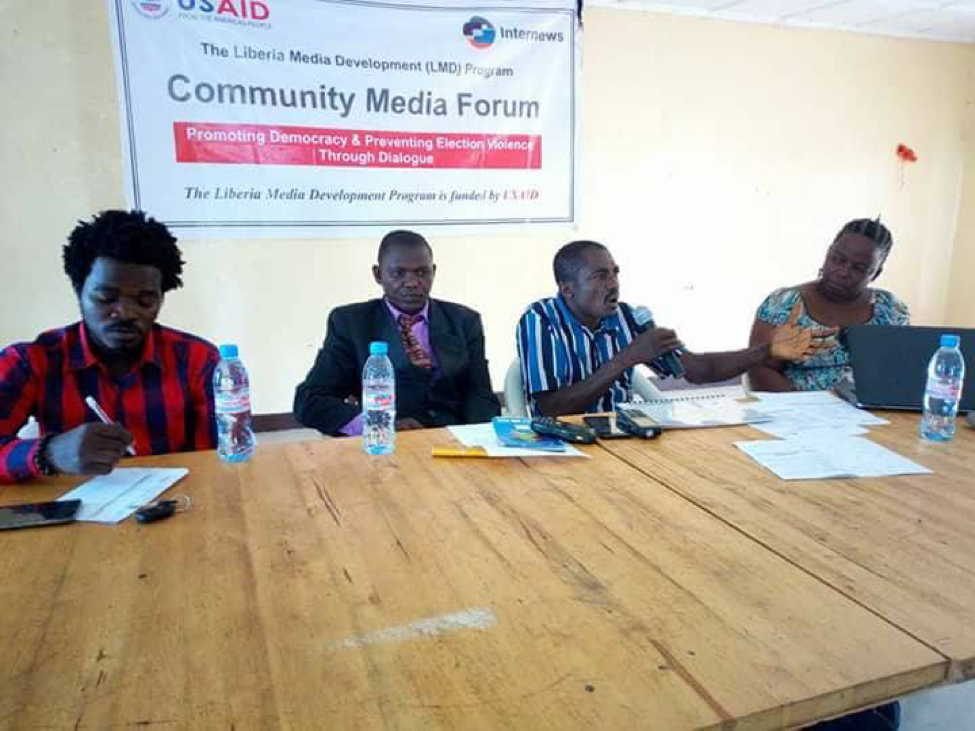 GBARNGA, Bong â€“ The Liberia Media Development program, as part of its Community Media Forum, has concluded a dialogue with citizens in Gbarnga, Bong.

The forum featured four panelists who focused on promoting democracy and preventing election violence through dialogue. They were drawn from civil society, the National Elections Commissionâ€™s local office in Gbarnga, the judiciary, and a representative of women in civil society.

Dorothy Toomann, the executive director of the Development Education Network Liberia, addressed efforts by women to engage each other and first-time voters. Moses Bailey, the civil society actor, addressed the actions taken by civil society organizations to encourage voter turnout.

NECâ€™s deputy magistrate for upper Bong, Robert Flomo, spoke of steps being taken to correct irregularities at the polls in order to ensure a credible outcome. He also spoke on civic and voter education for the runoff. Flomo T. N. D. Yarkpawolo, the city solicitor of the Gbarnga City Magisterial Court, deliberated on the meaning of the stay order placed on the runoff election by the Supreme Court.

The social and print media advisor of the Liberia Media Development program, Crispin Tulay, said the event aimed to inform and prepare citizens to remain peaceful as they await rulings from the Supreme Court into Liberty Partyâ€™s elections fraud case.

â€œThis forum is normally interactive; it is not only those that will be invited to talk. You too will have the opportunity to ask questions to get clarity on issues,â€ Tulay said.

â€œWe are still in elections; the election is not over even though there seems to be [a] delay. So today we have invited several persons and we will be discussing promoting democracy, preventing violence through dialogue.â€

Remarking at the forum, the mayor of Gbarnga, Viola Cooper, thanked Internews, which operates the Liberia Media Development program, for staging the Community Media Forum in Gbarnga to educate citizens on the unfolding issues relating to the elections. â€œThank you Internews, we pray that our women, our students from the various schools, our business women, those from the Christian and Muslim Communities, even the media will be able to spread information the right way,â€ Cooper said.

Meanwhile, the vice president of the Bong County Women Organization, Alice Siakor Garmo, is recommending to the National Elections Commission that there be separate lines for females and males at every polling place in future elections.

She said it is important to have separate lines because she observed that most women had difficulties competing with their male counterparts for spaces in queues at most of the polling places she visited around Gbarnga and its environs during the October 10 polls.

â€œWe will go and spread the message we have gathered from here today so that we can promote peace,â€ Garmo said.

She said members of her organization are â€œcommittedâ€ to speaking against nonviolence in Liberia by encouraging citizens to remain peaceful because women are often the victims of conflicts.

The LMD recently had a similar forum with citizens in Sanniquellie, Nimba.