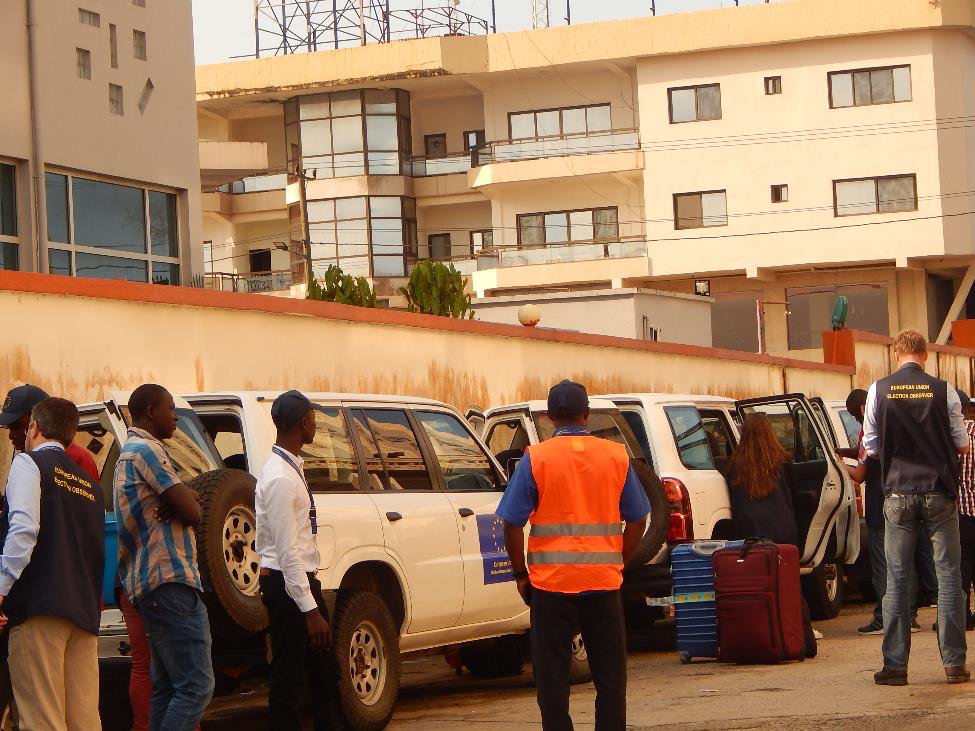 MONROVIA, Montserrado â€“ With less than a month left to election day, the European Union has deployed an Election Observation Mission to the country.

A group of 20 long-term observers was deployed from Monrovia on Thursday to different parts of the country to follow the electoral preparations and campaigns.

The observer mission, along with its deputy chief observer, Alessandra Parziale, arrived in the country on August 31, along with a core team of eight analysts. The team includes experts in a variety of background including law, human rights and gender, finance, and media.

Parziale described the October elections as â€œa historical moment for Liberia,â€ noting that his team would play an independent monitoring role. He added that the observers are bound by a code of conduct, which requires strict neutrality and non-interference. â€œThe European Union Election Observation Mission will monitor the process without interfering or supervising. I hope that our team of analysts and observers will contribute with impartial and objective assessments to a democratic transition in Liberia,â€ he said.

The team had earlier met with the commissioners of the National Election Commission on September 4 and officially launched the mission. It also had several meetings with national stakeholders and groups including government ministries, journalists, and civil society organizations as well as the EU delegation in Liberia.

According to a statement issued on Thursday, the observers are from 20 different member states of the European Union. They will stay in the country beyond election day.

â€œThe EU EOM will assess the elections according to Liberiaâ€™s national law and the international commitments it has made regarding elections,â€ the press statement said.

â€œIt will focus on the entire electoral process, including the legal framework, electoral administration, voter registration, nominations, campaigning, the conduct of the media, voting and the counting, the tally of results and dispute resolution mechanisms.â€ Some members of the observer mission met to bid each other farewell as they left for their respective assignments. Photo: Gbatemah Senah

The Liberian government invited the EU to deploy an observer mission to cover the pending election. The mission is independent of any EU institution, member states, or government institutions.

The National Democratic Institute is another international organization observing the October elections.

NDI had earlier published its latest observations and recommendations about the October presidential and legislative elections following a five-day assessment mission by experts from various African countries and the United States.

NDI has deployed six long-term observers and four long-term analysts who have been in Liberia since July, as well as an additional 34 short-term observers who will arrive and be deployed across the country to observe election day.

The delegation was led by the former assistant secretary of state for African affairs, and member of NDIâ€™s board of directors, Johnnie Carson.

Among other things, the NDI delegation recommended that NEC provides the complete final registration roll in a machine-readable format to political parties and accredited international and citizen election observers as a further means of ensuring the integrity of the voters’ list.

It also called on the commission to make the final registration roll available by September 10 to provide sufficient opportunity for voters to verify their status and check their details.

It wants particularly the NEC to ensure that election results are transmitted securely from magisterial offices to the commissionâ€™s headquarters and are announced in a timely, transparent manner.

NDI also admonished political parties to adhere to the Farmington River Declaration and the Ganta Declaration and promote and ensure peaceful conduct among candidates and supporters.

â€œIn the process of collecting information from party agents in the polling stations, parties should take caution not to usurp the NECâ€™s responsibility for announcing official election results,â€ it said.

The organization encouraged civil society organizations to intensify civic and voter education, particularly among women and rural communities, and in local languages. Prioritize educating voters on how to fill out ballots properly to help reduce the invalid ballot rates.

At the same time, the pro-democracy group called on the media institutions in Liberia to promote and self-regulate adherence to the media code of conduct.

â€œReport only verified information. Discourage inciteful language and dispel rumors. Clearly distinguish between articles written by journalists, editorials, and materials that are produced by outside sources and published for a fee,â€ it stressed.

According to Carson, the delegation believes that the success of these elections will hinge on whether voters have confidence in the process and that, ultimately, their will is reflected in the outcome.

â€œThe people and institutions of Liberia are taking the lead in consolidating democratic progress,â€ he said.

Meanwhile, NECâ€™s Executive Director Lamin Lighe has assured that with the support of the Board of Commissioners and staff of the commission, free, fair and transparent elections were certain.

NECâ€™s Chairman Jerome Korkoya disclosed that the execution of the electoral calendar is on course, and going as planned. He praised the government for the support the commission is receiving.

Korkoya had earlier warned that NEC is the only official legal authority to announce official election results in the country.

The Coalition for Democratic Change had pronounced it would conduct its own tallying and announce election results six hours after the close of polls, likely before the National Elections Commission.

The party first made the announcement when its deputy assistant secretary general for records and research appeared as a guest on August 12, 2017, on Capital FM. Ronald K. Mendscole said CDC had statisticians in the country who would work to compile the results of the election.

â€œIf any party in the October 10 elections will complain of electoral fraud, it is not the CDC,â€ Mendscole said.

The CDCâ€™s pronouncement has also been criticized in the public.