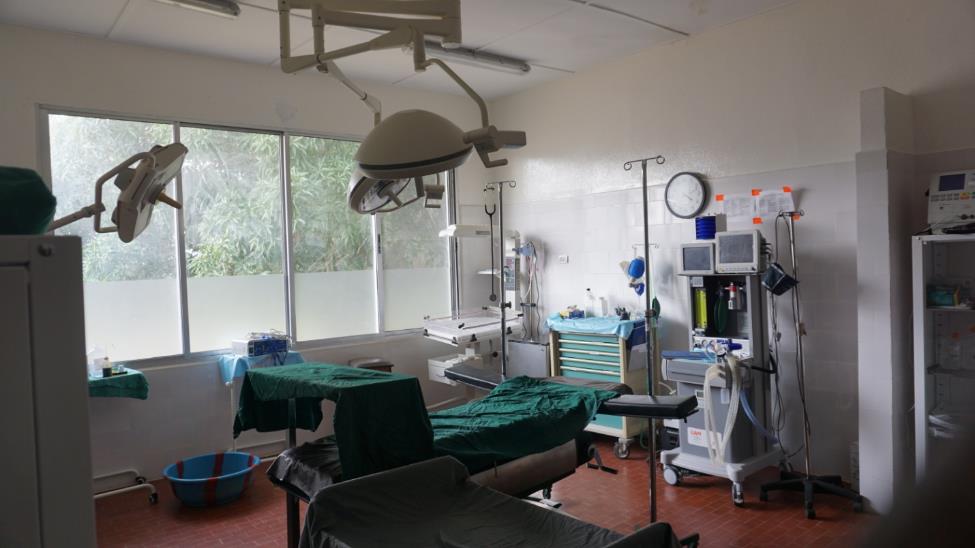 HARPER, Maryland – For the first time in 20 years, Harper’s James Jenkins Dossen Hospital will have a functioning x-ray machine.

The x-ray machine is one of several state-of-the-art machines provided by Partners in Health, an organization working in the area to provide quality health services to Liberians.

The medical facility was built in 1949 as a referral hospital for the southeastern counties. Before the civil crisis, the hospital was well-equipped with a laboratory, an x-ray machine, trained doctors, nurses, and supporting staff.

But at the peak of the war, most of the trained doctors and nurses left the facility and sought refuge in other countries, with nurse aides left in charge of running the hospital. At the end of the crisis in 2003, some of the doctors and nurses returned but the condition of the hospital remained appalling, according to Methodius George, the medical director for the hospital. The hospital faced many challenges, including the lack of sophisticated laboratory equipment such as x-ray machines.

“The hospital’s only x-ray machine got damaged prior to the civil crisis, which became a serious challenge,” George said.

The hospital’s challenges extended far beyond the x-ray machines. George said the hospital was conducting tests for malaria and other conditions using simple devices which may have compromised their accuracies. It was in August 2016 when Partners in Health began equipping the hospital’s emergency and operation rooms, maternity ward, and laboratory with quality equipment. That contribution, George said, has made the work of nurses and doctors easier. “With the state of the art equipment installed at the hospital, laboratory technicians are now able to do patients’ complete blood count, kidney and liver function test, among others, in a shorter period with results released the same day,” the medical director said.

George noted that when the hospital lacked an x-ray machine, patients in critical conditions would be referred to the Jackson F. Doe Memorial Referral Hospital in Tappita, Nimba for treatment. That process was expensive for the administration, he said, because “the hospital had to fuel the ambulance and give allowances to drivers and nurses accompanying the patient.”

“There is an improvement in the facility with the installing of the x-ray machine, and the hospital’s administration is now saving more cash,” he added.

He said the facility is now diagnosing patients’ fractures, pneumonia, and tuberculosis through the x-ray machine, which was never done in the past. Christine Lara, Partners in Health’s infrastructure director, explained to The Bush Chicken on a guided tour of the hospital’s facility that her organization’s main focus of concentration was the maternal ward, emergency and operation rooms and the entire electrical system.

Lara said the renovation of the electrical system would ensure that the new equipment installed at the hospital are not damaged during power outages.

To further ensure that the equipment are properly maintained, Lara said a bio-medical technician from Rwanda was training two Liberians in repairing and maintaining the equipment. She further said that a new outer waiting area for patients was constructed at the emergency building, which never existed in the past. In the past, Lara said the lack of such facility meant patients visiting with an infectious disease like tuberculosis could more easily infect others.

She said her organization wanted to reduce disease transmission by allowing patients to be outside, where there is a better flow of air. “Partners in Health believes in ensuring the protection of its patients,” Lara added.

She emphasized that in addition to the outer waiting area, her organization also created a new pedestrian access that allows patients to directly walk up to the emergency room as was not done in the past. She added that the “ambulance can also drive in and drop patients who are in critical condition.” The new design reduces patients’ confusion about the location of the emergency room. Elizabeth Sieh, a resident of Grand Kru and mother of triplets who was referred to the hospital from the Pleebo Health Center because of complications during childbirth, lauded the hospital’s administration for the level of improvement at the facility.

Sieh, who underwent several hours of operation before giving birth to her triplets, said she had visited the hospital several times in the past and found the change remarkable.

“I want to first thank God and the three doctors that operated me because if it not been for them, I would not have been alive today,” she said. Otis Toe Nyemah, a resident of Pleebo said he was also referred from the Pleebo Health Center for treatment. He said he completed all of his medical tests on the same day on which he arrived.

“I am very much impressed with the environment and treatment received at the hospital,” Nyemah said. “In the past, patients had to wait for several days before receiving the result of the medical test, but such is not the case as now.”

Nyemah said there is a sense of fresh air all over the hospital’s facility.

This story was funded as part of a travel grant provided by Internews. Featured photo by Zeze Ballah