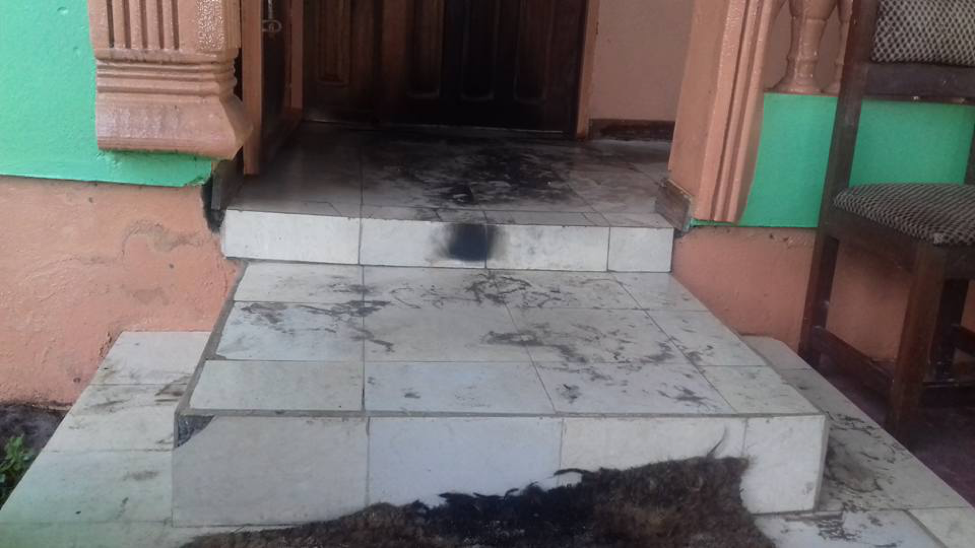 According to Toby, he was in bed sleeping when a boy who spent the night in his living room alarmed that the house was on fire. He said when he and the others woke up, they were surprised that the fire was not caused by the generator and soon heard the sound of a motorcycle leaving from around his house.

Men had poured gasoline at his front door and set the entrance ablaze. Smith said he and others managed to put out the fire and that there was not much damage done to his house.

Although the damage to Tobyâ€™s home was insignificant, this did not stop people from falsely spreading images of a similar home with its roofs engulfed in large flames on Facebook. They claimed that Tobyâ€™s home was entirely burnt.

â€œWe got saved by the mercy of God. Had it not been the boy sleeping in the living room, we would have been burned to ashes,â€ Toby added.

â€œI think I need to consider an asylum to another country, [I] just donâ€™t know why Iâ€™m being targeted by unknown men.â€

Toby said he has always been a professional journalist and that his report has in no way been targeted or influenced by others.

The recent attack on Toby marks the second time he has been targeted. In 2011, his home in Monrovia was attacked by unknown men during the period of the presidential and representative elections.

Though there has been no arrest made, Liberians on the social media are attributing the attack to politics. Partisans from the ruling Unity Party are accusing their counterparts from the Coalition for Democratic Change for masterminding the attack, while on the other hand, some officials of CDC are blaming the attack on Unity Party. Smith Tobyâ€™s home few hours after the attack. The damage was not as bad as widely reported on social media. Photo: Jefferson Daryoue

Meanwhile, the Press Union of Liberia has called on authorities of the Liberia National Police to swiftly investigate the arson attack.

The unionâ€™s president, Charles Coffey, described the attack as act of terrorism and urged the police to bring the perpetrators of the crime to justice.

The unionâ€™s statement described Wednesdayâ€™s arson attack as the most evil of assaults recorded against journalists since political activities heated up in the country.

The Liberia National Police says it dispatched a team of forensic examiners to the scene of the arson early Wednesday.

The press union has meanwhile cautioned journalists to be professional in carrying out their duties, especially in covering the 2017 elections.

34 mins ago by Ida Reeves