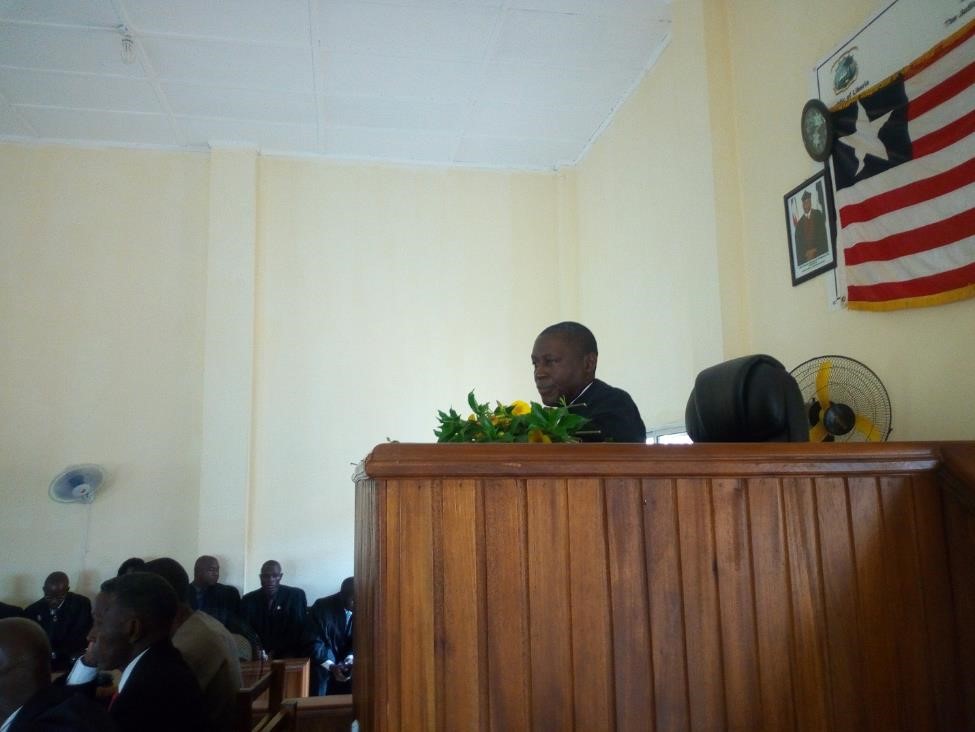 GBARNGA, Bong â€“ The judge assigned at the Ninth Judicial Circuit in Bong for the August term, Karboi Nuta, has opened a new term of court with a call for Liberians to respect one another, the environment, authorities, and the country.

The judge said when Liberians cultivate respect for one another, it will enhance the dispensation of justice and lessen the burden of overcrowding at various prisons in the country.

He said there is a growing wave of disrespect among Liberians for their fellow citizens, authorities, systems, and the environment, thereby resulting in a high influx of cases at various courts across the country.

â€œThe lack of respect has and continues, like cancer, to eat the fabric of our society; and itâ€™s no one cause of it, but we ourselves. My fellow Liberians, let us think this over â€“ let us respect ourselves,â€ Nuta said.

He called on elders in Bong to take charge of settling minor cases in communities among citizens as part of interventions to help reduce the courtâ€™s caseload and overcrowded prison in the county.

â€œThe elders must step in to handle smaller matters to enable the court [to] handle the greater matters,â€ he added.

For this term of court, there are 26 criminal cases and 51 civil cases on the docket. Bongâ€™s superintendent, Esther Walker, who attended the ceremony, said the local leadership of the county remains open to work with the judiciary.

She also stressed the crowded state of the Gbarnga Central Prison and appealed to judicial actors to work harder during this term to decongest the prison.

â€œThe Gbarnga Central Prison is overcrowded; we are recommending that those who are sentenced be transferred to the correction center in Grand Gedeh County,â€ Walker said.

Also present at the ceremony was Bongâ€™s county attorney, Jonathan Flomo, who cautioned prosecutors in the county to improve how they treat victims of criminal and civil cases.

He noted that it is important for prosecutors to improve victimsâ€™ satisfaction by keeping in constant contact with them, providing them regular updates on their cases.

â€œVictims must be informed of the rulings and legal findings into their cases to prepare them psychologically,â€ Flomo told the gathering.

He also said he wants jurors to perform their duties with high levels of ethics: â€œYour job is sacred, and it is not for money making. Perform truthfully.”

Judge Karboi Nuta is the resident circuit judge of Criminal Court B at the Temple of Justice. He has meanwhile promised to work with other actors in the court to reduce the pretrial detention at Gbarnga Central Prison.