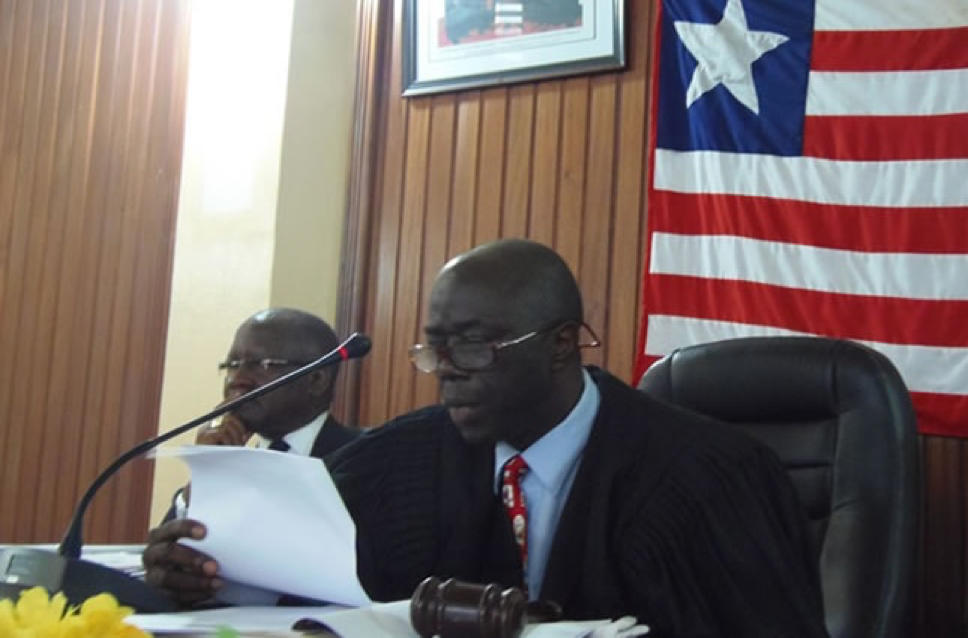 GANTA, Nimba â€“ After being photographed at a celebration of the result of Larry P. Younquoiâ€™s election court case, Judge Yamie Q. Gbeisay is fighting to dispel rumors that he influenced a Supreme Court judge to rule in Younquoiâ€™s favor.

Representative Younquoi was cleared by the Supreme Court to represent Nimbaâ€™s eighth district in the 54thÂ National Legislature after a prolonged dispute of the October 10 elections results with Saye S. Mianah, his closest rival.

The October 10 results had initially put Mianah ahead by 19 votes; however, challengers are allowed to request recounts if margins of victories are within 50 votes. A recount process conducted on November 4, 2017 allowed Younquoi to take a 17-vote lead over Mianah and Mianah subsequently appealed to the Supreme Court and the National Elections Commission to overturn the results. He lost all cases to Younquoi.

Gbeisay said he played no part in the districtâ€™s politics as he does not originate from the eighth district and as a judge, he cannot get involved in politics. He called on those accusing him of having played a role to stop making false accusations.

â€œI am a judge by my assignment and I am not supposed to practice politics; so I try to keep myself as silent as possible,â€ he said.

Gbeisay said the speculations stem from a photo posted on Facebook showing Younquoi at Gbeisayâ€™s hotel in Ganta sharing drinks immediately following the recount process in Saclepea that declared Younquoi winner of the district.

Gbeisay said Younquoi had asked to use his facilities, the Peace Empire Hotel, to celebrate with his supporters.

Gbeisay confirmed that the post came from Calvin Wonda, Mianahâ€™s political spokesman, and it contained a message cautioning Gbeisay to abstain from the districtâ€™s politics.

Gbeisay said the post also prompted calls from two candidates of the district, Mianah and Melvin Garpeh, who asked him to avoid meddling in the districtâ€™s politics.

â€œI explained to them and I said, look, if you, Hon. Mianah, had won and passed to my place, I would have done a similar thing for you,â€ Gbeisay said.

The judge said the situation reached the peak when Chief Justice Francis Korkpor called Gbeisay to inform him that he had received a text message containing a death threat from Calvin Wonda on Dec. 25. Gbeisay relayed that Korpor told him that the text from Wonda claimed that Gbeisay had influenced the chief justice to proclaim the ruling in favor of Younquoi.

Gbeisay said he pleaded with Korkpor to avoid having Wonda arrested, as he was â€˜insignificant.â€™ Gbeisay, however, maintains that he had no hand in Mianah losing his challenge to Younqoui.

â€œI have explained to them over and again, I am a circuit court judge and I have nothing to do with what is happening,â€ he said. â€œBut nobody seems to understand it anywayâ€”the rumor is everywhere.â€

Gbeisay said the rumors are making him to fear for his life, his property, and the safety of his family.

â€œI have come here to let you know that â€“ I, Cllr. Gbeisay â€“ have nothing to do with what happened in district eight.â€