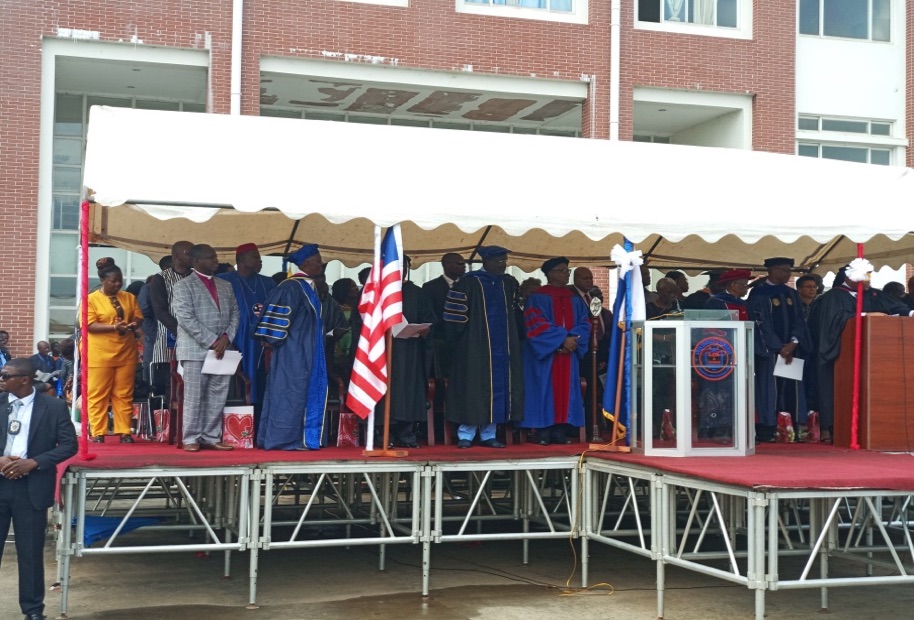 MONROVIA, Montserrado â€“ The 15th president of the University of Liberia, Julius Sawolo Nelson, has been inaugurated at a well-attended ceremony on Thursday, Nov. 28 in Monrovia, at the same time that the university is preparing to celebrate its Centennial Commencement Convocation slated for December 12.

Nelson was appointed by President George Weah and succeeds Ophelia Weeks who was recently dismissed.

In his inaugural message to the university community, Nelson remarked, â€œThis is a special mandate that we are receiving today â€“ to lead the team of wonderful people and administrators responsible to implement the mandate of the university. My family and I will always cherish this privilege to serve the University of Liberia and this country for the rest of our lives. I believe we can create an enabling environment that will facilitate and promote the incorporation of our ideas from our national and international partners to achieve the goals of the university. The primary objective of the university remains the provision of quality tertiary education within our borders.â€

He also used his remarks to thank President George Weah for appointing him and for the governmentâ€™s recent free tuition policy at all public universities and institutions of higher learning. The policy, according to Nelson, has helped increase enrollment at the university, a key indicator that many more Liberians are utilizing the opportunity for higher learning.

University records show that of 20,000 students who bill each semester, only 8,000 to 12,000 successfully complete registration and payment. With the new policy, this situation has begun to be reversed.

Despite numerous challenges at the university, Nelson said there have been improvements in the overall learning environment. For example, the university recently introduced an online enrollment portal, at the same time that the government has begun prioritizing disbursements of salaries to university staff.

The new president also took the opportunity to outline his plans for the university, among them the introduction of new academic programs in underserviced disciplines, continuing faculty development initiatives, and the introduction of more short-term life skills programs that target employability.

Of equal emphasis were the improvement of studentsâ€™ activities, further curriculum development, and improved academic and research capacities that ensures that university graduates can effectively compete regionally and beyond.

Nelson was cognizant, however, of the challenges ahead, including scarce university resources, and limited qualified and experienced faculty.

Performing the induction ceremony on Friday, the president of Liberia and visitor to the university, President George Weah, said, â€œAs you have been entrusted with the mantle of authority to lead this university, I ask that you lead with wisdom in order to fulfill the vision that you have promised in your address.â€

He continued: â€œIn my dual capacity as president of Liberia and visitor to the university, I assure you my support to you and your team as you embark on this journey of leadership and service. We will do all that is necessary to maintain this reputation and support your accomplishment.â€

â€œI expect that your experience and expertise in those areas will become an asset in your engagement with students in order to address matters which are of pressing concerns concern to them,â€ President Weah further noted.

The Students Transitional Committee chairman, Benedict S. Paye, was also on hand to thank Weah and urge him to lend his utmost support Nelson in the task ahead.

â€œThere are so many challenges we are faced with at the University of Liberia. You cannot send a soldier at the battlefront without ammunition,â€ Paye concluded.

CORRECTION: A previous version of this article incorrectly stated that the inauguration took place on Friday, Nov. 29.