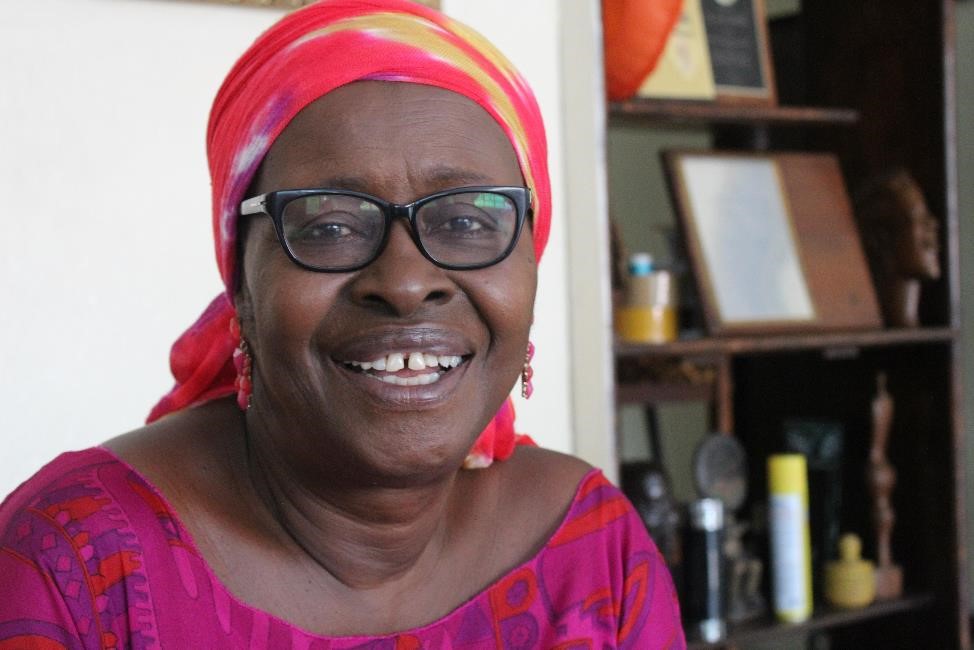 Liberia has its own Angelique Kidjo – in that we have a singer-songwriter and activist wrapped up in an elegant yet outspoken package whose music can appeal not only to Liberians but also to other Africans, in addition to the ‘world music’ lovers in the West.

Miatta Fahnbulleh is all that and has been doing it for much longer.

However, it was not always easy for this reputable daughter of a diplomat, whose father had been an ambassador to Kenya, to transition into the world of secular music.

“Musicians in Africa were seen as ‘gronna boys,’” Fahnbulleh said. “So they relegated musicians to the ‘not serious’ group of people and definitely even with me, I had the limitation within my mind. I mean, I knew I wanted to sing, I knew I loved to sing, but I also knew that this was not what was supposed to happen within the status quo in society.”

Her first public performance outside of her school’s all-girl band occurred in 1967 “when I just came from Nairobi, Kenya and free from the strict discipline of my father,” Fahnbulleh recalls.

During her brief stint as a singer with the Soul Messengers, an African-American band that was active in the 1960s and 1970s, she performed mostly cover songs.

Despite her love for singing, in 1968, Fahnbulleh would move to the United States “to do the correct thing” and go to college for a career in broadcast journalism. However, she could not escape the call to perform. Someone would always point her out as a singer, and she would be lured onstage to perform.

Fahnbulleh found that she felt more freedom to be able to perform in secular venues in the US without being branded with a negative label unbefitting of a young lady. She sang with a band promoted by the New Breed, which supported Afrocentric arts and culture.

Along with two other Liberian women, including the mother of popular Liberian artist F.A. (Faquama Anthony Deline), Fahnbulleh performed at pan-African events and audiences that wanted to hear African songs.

“You find out you have to do a lot of compromise in terms of your music because you’re always told you have to make it palatable to the American audience,” she said.

All along the way, her family had little idea of what she was doing. “They didn’t know how much I was getting into it in America,” she said.

The lack of support was even more infuriating because Fahnbulleh would hear friends brag about patronizing American artists with exorbitant ticket prices but disregard their local talent.

“One of my friends came back from London bragging to me that he bought a ticket for 50 pounds to go and see Frank Sinatra,” she explained. “This is a friend. And I could never convince this friend that, listen, we can do this same thing here. We are many who can do this here and so forth. So, that’s always been my predicament.”

The Liberian government was no different from its people. Fahnbulleh said the government tended to prefer international artists when seeking performers. One of the few times she was invited to perform by the government came as a result of collapsed negotiations between organizers of a Gloria Lynne concert and the American star’s managers.

Fahnbulleh said after her performance, a high-level government official boasted of how lucky Liberians were to have their own artist of such talent, before handing her an envelope that she later found out contained only US$100.

“The only reason why at that time I didn’t go back in the room and give them their envelope back was because these were really big people,” she said. She complained to a friend who suggested that she take the issue to the president. President William Tolbert appeared apologetic about the incident and compensated Fahnbulleh with US$3,000.

But despite the often lukewarm support from Liberians, Fahnbulleh persevered and firmly established herself in the class of African musician royalty, having performed with American jazz legends such as Duke Pearson and Donald Byrd, and African luminaries such as Yvonne Chaka Chaka and Hugh Masekela, who produced her first album. Fahnbulleh now has five albums under her belt and is working on the sixth one.

As someone who has closely watched Liberia’s music scene over the years, Fahnbulleh laments the lack of emphasis on live performances, especially when compared to the lively scene of Monrovia from the 60s and 70s.

Back then, if you had a place of entertainment, having a band was required. “Live band was the order of the day here,” she recalled. The likes of Morris Dorley, the Bong Miners, and many others occupied the scene.

Fahnbulleh says she has witnessed embarrassing situations where young artists attempting to perform live with a band have been dumbfounded when asked to specify the key in which they would like to perform. Knowledge of the key, which says a lot about the fundamental musical notes that will make up a song’s melody, chord, and baseline, can allow musicians to play a more accurate version of a song.

“Most of the young artists here have not had the kind of exposure to music – to learning music – in terms of the white keys and the black keys and the guitar strings,” she said. “Like I told you, in the 60s, everywhere was live music. People were playing the bass, the saxophone.”

She attributes this to the war and the resulting poor education system. Most children now attend schools where music is not taught. Such was not the case in the past, Fahnbulleh says. “Every school had a choir within the school. Music was a part of the curriculum. If you didn’t have a permanent teacher within the school, there were days when the music teacher came.”

Despite Fahnbulleh’s disappointment at the scarcity of young artists skilled at live performances, she does have her favorites among young Liberian artists. She named Soul Fresh and Eric Geso as her favorite artists under 40 although she said some great female singers are still finding themselves stuck in a space familiar to her – where they cannot perform outside of the church without losing their modesty.

“But unfortunately for them, again they find themselves caught up in the same cycle that we went through,” she said. “Decent girls [are] not supposed to be singing in the nightclub. The most they will allow you to sing, that’s gospel. So you find out that they all moved out to gospel.”

As for Soul Fresh and Eric Geso, besides the originality in their work, Fahnbulleh said she likes their dedication to causes dear to her.

Fahbulleh’s activism is a large part of her life. She champions a host of causes, although most focus on the education of girls and reducing maternal mortality.

As Liberia’s Goodwill Ambassador for Maternal Mortality, Fahnbulleh wants to reduce Liberia’s high maternal mortality rate, which is the seventh worst in the world and just ahead of Somalia. She said mothers between the ages of 15 and 19 have the highest casualties for maternal deaths. Because of that, she has tried to tailor her message to young women, encouraging them to further their education and use condoms to prevent pregnancies.

Her organization, Obaa’s Girls, operates a school but focuses on “everything that concerns the development of the girl child” including mentorship and just providing ears for girls to feel comfortable telling her their problems.

“Here in our society, the children are not allowed to talk,” Fahnbulleh says, adding that she hosts a weekly show on Radio Monrovia where she allows young people to voice their opinions on the relevant issues.

A few months ago on the “Let’s Talk about It” show, the topic of menstruation surfaced as Fahnbulleh discussed with girls who were 15 and 16 years old. Some angry callers questioned the appropriateness of discussing the issue with children.

Pushbacks of those sorts do not faze Fahnbulleh. “The more things I discover they don’t discuss with their children, I make it a point [to discuss them],” she said. “I have young girls coming off the street to tell me that they’ve been raped, instead of telling their own parents, because they know those people will compromise.”

That openness has lent Fahnbulleh the nickname Aunty Miatta across town. “The word is, you [don’t] got somebody to talk to?” she says. “Come talk to Aunty Miatta. I [won’t] say I can solve all your problems, but I will listen.”