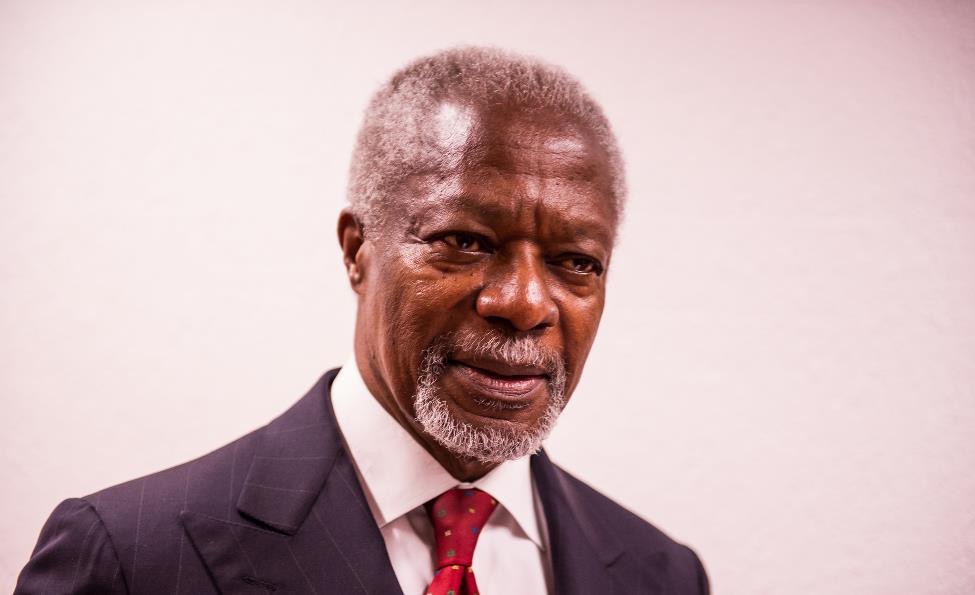 MONROVIA, Montserrado â€“ The former United Nations secretary-general Kofi Annan, who died on Saturday, August 18, 2018, will be remembered in Liberia for how his career was interwoven with the countryâ€™s tumultuous past and the eventual resolution of the war.

Annan, who was born on April 8, 1938, died after a brief illness in Bern, Switzerland. He leaves behind his wife, Nane and three children: Ama, Kojo, and Nina. The Ghanaian diplomat was the seventh secretary-general of the United Nations who served two terms at the U.N. from 1997-2006.

At the time of Annanâ€™s ascendancy as head of the U.N., Liberia had just conducted elections in 1997, with Charles G. Taylor of the National Patriotic Party of Liberia becoming victorious. Liberia then went into war again, as Taylorâ€™s government came under attack in 1999 from Sekou Damate Connehâ€™s Liberians United for Reconciliation and Democracy in the north of the country. The rebel group was active from 1999 until the resignation of Taylor.

Annan was instrumental in pushing forward several U.N. Security Council resolutions aimed at restoring peace to Liberia, including Resolution 1509 (2003), which authorized 15,000 military personnel to be sent to Liberia as peacekeepers.

It was again under Annanâ€™s leadership that the U.N. passed Resolution 1532 (2004), which called for the freezing of assets and funds held by Charles Taylor and his associates.

These actions were key to ensuring that Liberia had its first post-war elections in 2005, with Ellen Johnson Sirleaf being elected as Africaâ€™s first female president.

In 2006, Annan, in his progress report to the Security Council, said Liberia now served as â€œan example of hopeâ€ and of what can be achieved when leaders and citizens work together.

â€œLiberia has continued to make tangible progress in a number of areas. The three branches of government are functioning; the reform of the security sector is gradually progressing; the resettlement of internally displaced persons has been completed; an increasing number of Liberian refugees have returned home,â€ Annan noted in his report.

â€œI was impressed by the commitment and dedication to peace and democratic governance demonstrated by the leaders and people of Liberia.â€

Because of Annanâ€™s efforts, the state-owned University of Liberia in 2006 inaugurated the Kofi Annan Institute for Conflict Transformation in his honor on its main campus on Capitol Hill. The center aims to develop human resource capacity for policy studies in conflict, peace, security, gender, and development.

Later, in 2014 when the deadly Ebola epidemic was on its path to kill over 11,000 people in Liberia, Guinea, Sierra Leone, Nigeria, the U.S., and Mali, Annan condemned the response to the disease, claiming the international community did not â€œwake upâ€ to the crisis until it hit America and Europe.

Speaking onÂ the BBCâ€™sÂ NewsnightÂ program, Annan said he was â€œbitterly disappointedâ€ with international communityâ€™s response to the Ebola crisis in West Africa.

â€œI think the international community could have offered and organized ourselves in a much better way to offer the assistance. We didnâ€™t need to take months to do what we are doing today,â€ the former U.N. secretary-general said.

Following his demise, the former president Sirleaf issued a statement saying that the world had lost a trailblazer for peace, freedom, and democracy.

â€œAfrica has lost a heroic son, and I, one of my dearest colleagues, and a friend,â€ the former president wrote. â€œI am so very grateful that I was able to be with Kofi in what was the last few weeks of his life, and fittingly, for the celebration of the centennial of Nelson Mandela’s birthday.â€

Annan chaired the Kofi Annan Foundation and as chair of The Elders, a group of global leaders founded by Nelson Mandela.