FUAMAH DISTRICT, Bong â€“ When Lawrence Mulbahâ€™s wife went into labor a few months ago, he took her to the Bong Mines Hospital. However, his experience at the hospital left him frustrated with the state of the health facility, as he was forced to buy everything that was needed for the delivery, including the gloves used by the staff.

â€œFortunately, my woman delivered safely and they did not even use all the medicine and things I bought,â€ Mulbah said.

Hospital administrators at the government-run Bong Mines Hospital are warning that a financial crisis at the hospital and the resulting lack of resources is threatening the lives of people served by the facility, including pregnant women with labor complications and those with emergency cases.

The referral hospital that serves more than 40,000 people â€“ mainly from rural communities in Bong, Gbarpolu, Margibi, and Montserrado â€“ has struggled to remain afloat since June 2016. At that time, the China Union mining company turned over the hospital to the government due to a worsening business climate that caused the company to halt its mining operations.

The company had run the hospital for three years prior to the handover. The health care facility had been built by the former Bong Mining Company but was taken over by China Union as part of its corporate social responsibilities spelled out in a 25-year mineral development agreement signed in 2009.

But the declining prices of commodities and raw materials forced the company to turn the hospital over to the government. Although the hospital faced minor challenges before June 2016, the situation has become much worse since the government assumed responsibility.

The 100-bed hospital now faces several challenges, including the lack of drugs, the lack of stable electricity, as well as the failure of the government to pay salaries for months now.

According to the hospitalâ€™s administrator, Alvin Sirleaf, the hospital has been without ambulance since July 2016, as a result of an accident that damaged the vehicle beyond repair.

The hospital also has no running water. There are also challenges ranging from the lack of essential medical drugs and electricity while more than 50 percent of the staffers are not on the governmentâ€™s payroll.

Sirleaf said most of the hospitalâ€™s catchment communities are hard-to-reach areas and he said there is a need for a four-wheel-drive vehicle to transport patients in emergency conditions, especially pregnant women.

The hospitalâ€™s administration is calling on Vice President Jewel Howard-Taylor, who hails from the county, to help the hospital. While serving as senator of the county, Howard-Taylor had lobbied to have China Aid donate the now-damaged ambulance. 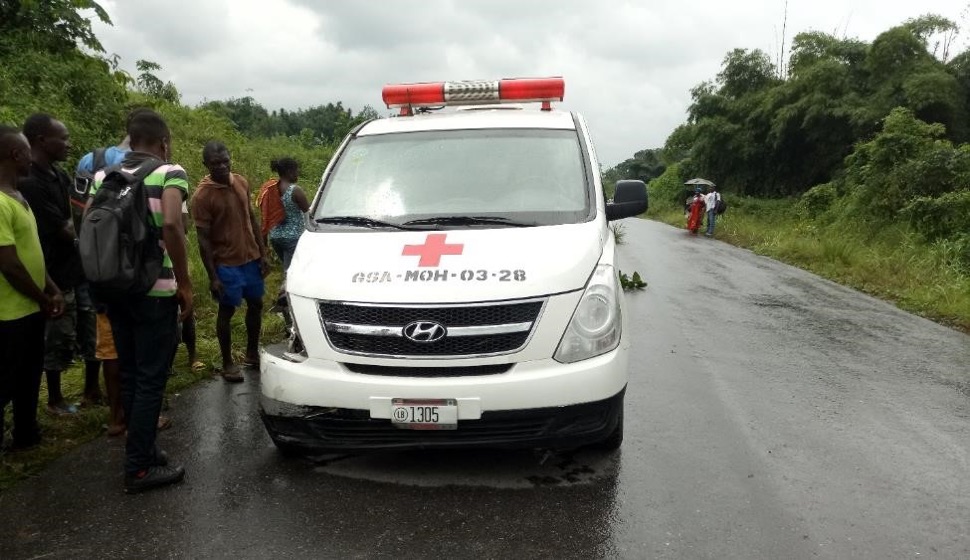 The ambulance during the 2016 accident. Photo: Emmanuel Degleh

With no ambulance, emergency care patients are transported using motorcycle taxis. When the need arises to refer patients to other facilities, commercial taxis are often hired.

Dr. Francis Obiazi, the hospitalâ€™s medical officer, said despite the challenges, hospital staff work around the clock to make sure that essential medical services are delivered.

â€œOnly about 50 percent of the professional staff here are on governmentâ€™s payroll; the rest are on incentives but we have the assurance that the remaining staff will be placed on the payroll gradually,â€ he noted.

A senior staff in the vice presidentâ€™s office promised to work with Vice President Howard-Taylor to address some of the hospitalâ€™s challenges.

Titus Charlie had gone to donate a few cartons of supplies to the hospital when he made the statement.

â€œI will convey your request to the vice president exactly what you have said to me, especially the issue concerning the ambulance,â€ he noted.