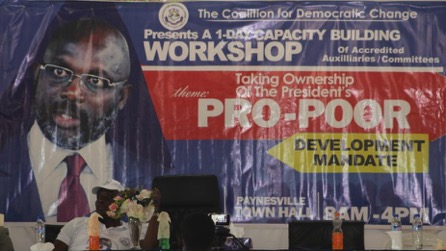 MONROVIA, Montserrado â€“ Last week, Monrovia saw a series of interest events and happenings. The events focused on politics and the economic, thus attracting media coverage. This article gives a pictorial review of the weekâ€™s activities. At House of Representatives last week, colleagues of Rep. Yekeh Kolubah of Montserradoâ€™s 10th district, including Nimbaâ€™s fifth district representative, Samuel Kogar, filed a communication to the general body against Kolubah. They alleged that Kolubah had violated portions of the Houseâ€™s standing rules by publicly alleging that one of the reported missing containers of the L$16,000 new banknotes was delivered at the home of President George Weah.
Kogar and others recommended that the Montserradoâ€™s lawmaker be investigated, but Rep. Thomas A. Goshua of Grand Bassaâ€™s fifth district argued that the lawmakerâ€™s comments were his opinion on an issue of national concern and therefore he must not be investigated for exercising his right. House Speaker Bhofal Chambers denied Goshuaâ€™s motion. Amid ongoing investigations into the reported mysterious disappearance of the billions in new banknotes, several past and current officials of the Central Bank of Liberia also appeared before the plenary of the House of Representatives on Monday, November 19.
The Central Bankâ€™s deputy governor for operations, Charles Sirleaf, in contradiction of previous testimonies by the bankâ€™s former executive governor, Milton Weeks, said the bank received authorization from the former president, Ellen Johnson Sirleaf, and Senate Pro Tempore Armah Jallah to print the additional L$10.5 in new banknotes.
Weeks had earlier told the plenary that they were not authorized to print the additional new banknotes. Instead, he said the board of governors had misunderstood a communication from the legislature as an authorization to go ahead with the printing of the additional L$10.5 billion. A day-long capacity building workshop to educate members and executives of the Coalition for Democratic Change was held during the week.
The exercise brought together senior and committee members of the CDC. It took place at the Paynesville Town Hall under the theme, â€œTaking ownership of the Presidentâ€™s Pro-Poor Development Mandate.â€ The Ministry of Transport in collaboration with the Liberia National Police and the Liberia Revenue Authority began its second phase of inspecting vehicles, tricycles, and motorcycles to ensure they were registered. Residents of the 9th Street community in Sinkor staged a protest last week over the delay by the Liberia Electricity Corporation to replace several faulty transmitters in the area.
The protest created significant congestion on Tubman Boulevard and Jallah Town Road. Motorists spent hours in the traffic before reaching their destinations. Staging protests by blocking traffic has become an increasingly popular trend across Monrovia to draw the governmentâ€™s attention. Monroviaâ€™s lack of alternative routes makes the city especially vulnerable to these actions. On Saturday, November 24, the Liberia National Police launched its third road safety campaign.
Two of the campaigns were held in Monrovia while another took place in Buchanan, Grand Bassa.
Speaking at the launch in Buchanan, Alphanso Bindah, the policeâ€™s chief of traffic disclosed there were 15,503 road accidents reported from the 15 counties between 2007 and April 2018, Bindah said during the period, Montserrado, Margibi, and Grand Bassa account for the highest number of cases.
He said 9,181 persons were injured during the period, but Grand Bassa accounted for 825. The county also accounts for 147 of the 1,747 persons who lost their lives nationwide to become the third highest ranked in accidents. Even as the Liberia National Police launched its road safety campaign, Monroviaâ€™s streets remain littered with large manholes with missing covers, posing danger to drivers and passengers.
This damaged manhole sits in the middle of the road at the intersection of Lynch and Broad Streets. Its cover has likely been taken away allegedly by criminals to be sold to scrap dealers. Lifesaving Liberia, a non-profit organization dedicated to improving water safety, officially launched to the public last week.
The groupâ€™s launch also coincided with the launch of a fundraising campaign on Providence Island to support its programs. The organization was started in 2010 by retired officers of the Liberia National Coast Guard. Across Monrovia, major distributors of petroleum products still appear to be out of gasoline.
Stations affected by this phenomenon are operated by Total, Aminata, and NP. Super Petroleum appeared to be in full operation on Saturday, November 24.
Employees at the crowded gas stations were recently seen turning back street retailers who carried empty containers.

All photos by Zeze Ballah