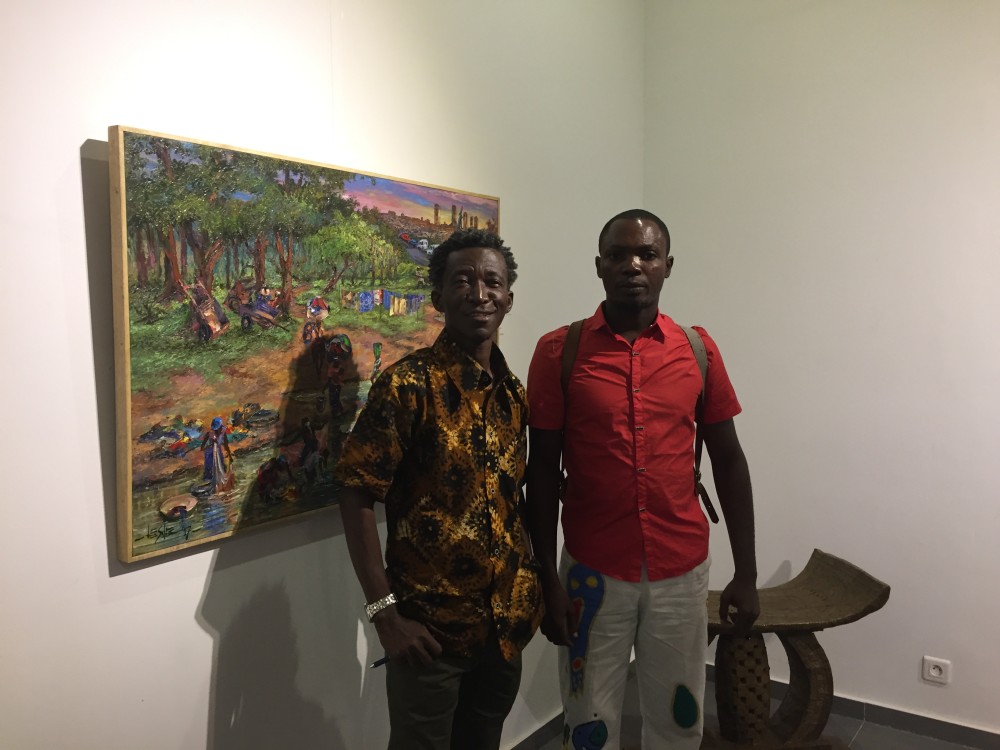 From humble beginnings in the remote rural town of Dambala in Grand Cape Mount, Liberiaâ€™s renowned art icon Leslie Lumeh continues to extend his talent and influence far and wide.

Early this month in the Ivory Coast, the LouiSimone Guirandou Gallery, located in the capital city of Abidjan, opened a new exhibition of Lumehâ€™s art along with the artworks of his Ivorian counterpart, artist Ange MÃ©nÃ©. Both visual artists are being presented at the invitation of one of that countryâ€™s most prestigious galleries, established and operated by its founder, art historian Simone Guirandou Nâ€™Diaye.

Titled â€œNo Border,â€ the exhibit curated byÂ NicoleÂ Louis-Sidney,Â features eight recent paintings in oil, acrylic, and watercolor by Lumeh and 12 recent artworks by MÃ©nÃ©. The official opening of the exhibition was held on Thursday, May 4, 2017, with a large audience representing a cross-section of art lovers in attendance and is scheduled to remain open to the public through July 1, 2017.

The successful program represented the culmination of many months of meticulous planning by curatorÂ Louis-Sidney,Â along with a team dedicated individuals and partners. The exhibit demonstrates how art can unite people from all walks of life.

Aside from the 20 paintings, the design of the exhibition features a unique installation created in the middle of the hall by the two West African artists. AÂ small parcel of roadÂ is shown with a yellow line running from one end to the other, with pairs of shoes (representing people) on both sides and car tires mounted at the four ends of the arrangement. The exhibition features a unique installation created in the middle of the hall by Lumeh and MÃ©nÃ©. Photo by Omanza Eugene Shaw

The eight art pieces by Lumeh are all executed in his unique style of painting and in different sizes, which include large oil and acrylic on canvas and smaller watercolors, depicting his favorite subjects in everyday scenes that usually inspire him with such titles as â€œFlower Sellers,â€ â€œLes Cabannes dâ€™Abidjan,â€ â€œWomen Washing at a Creek,â€ and â€œVendeur de Tableux (Route de Bassam),â€ while his Ivorian counterpart MÃ©nÃ©, paints on recycled plastic.

An art professor, MÃ©nÃ©’s work is a modernism of cave paintings and children’s drawing. Â Â

Lumeh is one of Liberiaâ€™s foremost visual artists. He has established himself over the last two decades as a credible force for positive change, utilizing his creative abilities as a self-taught professional, and making remarkable strides both locally and internationally as an artist, illustrator, cartoonist, and teacher.

It is no surprise therefore that he receives invitations regularly to participate in such prestigious events as this one in Abidjan, where he spent nearly two weeks mounting the exhibit and attending the opening reception.Â

Founder and executive director of the Liberian Visual Arts Academy, Lumeh continues to nurture the budding talents of promising young visual artists in his community. He also serves as a council member of the recently established Innovation Campus in Monrovia, a position which resulted from his long association with Accountability Lab, an organization that supports a new generation of active and responsible leaders in Liberia.

One of Lumehâ€™s many ongoing projects involves his participation in a major exhibition currently touring the world. Titled â€œLumieres dâ€™Afrique” (The Light of Africa), it features 54 artists from each country on the continent and showcases some of the best artistic talents from Africa today. He has also been featured twice on the CNN television network.