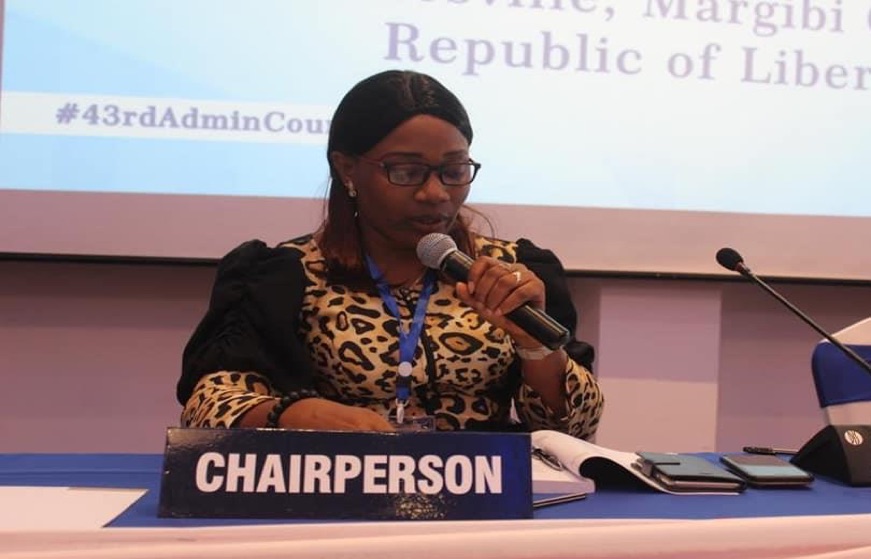 UNIFICATION CITY, Margibi â€“ Liberia has been named the chairperson of the Administrative Council of the African Regional Intellectual Property Organization, or ARIPO. This development occurred during the councilâ€™s 43rd Session currently taking place in Liberia.

The 19-nation member organization began its 43rd Session on Monday, Nov. 18 at the Farmington Hotel in Margibi.

Over the last 40 years, ARIPO has led efforts to expand protections for intellectual property rights in more countries across the region.

The director-general for Liberiaâ€™s Intellectual Property Office, or LIPO, Adelyn Cooper, said Liberia accepted ARIPOâ€™s choice of Liberia to head the organization with humility and a deep sense of commitment to the tasks ahead.

Liberiaâ€™s two-year tenure at the helm of the council, she hoped, would increase the governmentâ€™s partnership with ARIPO as the basis for collaborative actions on intellectual property rights protection for international businesses operating on the continent.

Liberiaâ€™s ten-year membership of ARIPO has been mutually beneficial, and particularly rewarding, as it has enabled LIPO to organize and institutionalize its activities in Liberia. Had the Ebola virus outbreak not derailed plans in 2014, Liberia was set to host the Administrative Councilâ€™s session here in Monrovia. The ongoing session in Margibi was, therefore, a pleasant fulfillment of the impossible event of 2014.

Cooper was effusive in her tribute to ARIPOâ€™s director-general, Gift Sibanda, and all other staff of the group who worked to finalize Liberiaâ€™s membership of the regional body.

The Lusaka Agreement,Â which established ARIPO, as well as its revised charter, has the stated objective â€œto promote the harmonization and development of the intellectual property laws, and matters related thereto, appropriate to the needs of its members and of the region as a whole,â€ as well as pull together scarce resources of member states for this and other objectives.

Under the leadership of Director-General Fernando Dos Santos, considerable progress was achieved in the generation and protection of intellectual property rights. The LIPO director-general, therefore, committed her leadership of ARIPOâ€™s Administrative Council to carry forward the gains, and to seek to â€œtranslate thoughts into vision and policy,â€ which, if accepted, will help build the relationships needed to deliver a more accountable and impactful ARIPO.

Also in attendance at the event as a guest of honor was Commerce and Industry Minister Wilson Tarpeh. Tarpeh reiterated Liberiaâ€™s pleasure to host the ARIPO meetings, and its gratitude to head the groupâ€™s Administration Council.

As Africaâ€™s oldest independent republic, Liberia stood at the forefront of building Africaâ€™s civil society, regional, and international institutions. This long and vast history of institutionalism, Tarpeh said, will be brought to bear in Liberiaâ€™s leadership of the Administrative Council, as well as to the principles of other relevant international bodies, including the World Trade Organization, and all relevant intellectual property treaties.

Given the immense importance of intellectual property in public health, innovation, and access to medicines, climate change, and the development of green technologies, Tarpeh offered governmentâ€™s commitment to ratifying the World Trade Organizationâ€™s main legal instruments, as well as other outstanding protocols and treaties of the World Intellectual Property Organization and ARIPO.

Although ARIPO focuses on intellectual property protection, its task will be impossible to achieve without needed support from political actors and policymakers across member states. Tarpeh was, therefore, quick to pledge President George Weahâ€™s support in this regard.

â€œIP is our baby,â€ he said. â€œAfrica needs a good IP regime to maximize its youthful potential. You all will agree that Africa is the leading continent in creativity. So letâ€™s create the incentive for our young brothers and sisters to stop the willing migration to slavery back to where our parents fought for freedom. We must act in the interest of IP now and provide the needed local resource mobilization.â€

ARIPOâ€™s outgoing chairman of the Administrative Council, Chikumbutso Namelo of Malawi, was also on hand to share his reflections on the organizationâ€™s achievements over the years. He disclosed that the organization, under his leadership, achieved record growth in the applications of utility models filed in 2018.

â€œI also wish to applaud the developments that ARIPO recorded in the information and communication technologies. I was indeed informed that from 2018, the ARIPO online system became fully functional, and I was glad to learn that this has changed the business processing in the organization. The secretariat received encouraging testimonies from IP practitioners and applicants using the ARIPO online platform,â€ he said.

A pilot database was set up in Sept. 2018 and has more than 450,000 intellectual property titles from ARIPO offices from 12-member states currently.

In thanking Liberia for hosting ARIPOâ€™s 43rd Session, Director-General Santos praised the Liberian government for its partnership and commitment to the organizationâ€™s agenda.

ARIPOâ€™s Council of Ministers is scheduled to convene on Thursday, Nov. 21, where President Weah will serve as guest of honor, and address the council.