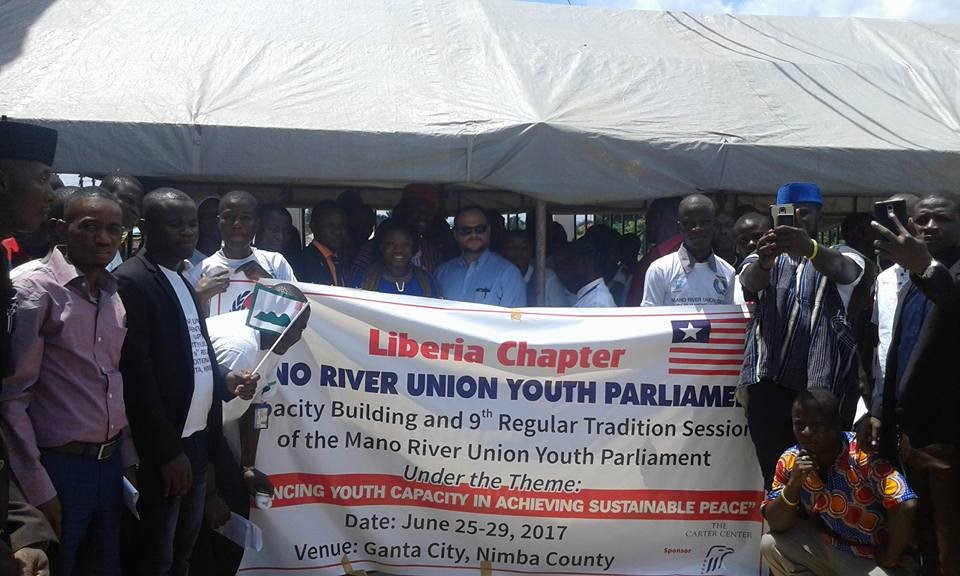 The meeting, which is sponsored by the Carter Center, is expected to end on Thursday, June 29, 2017.

The Mano River Youth parliament is a collection of youth from the sub-regional countries of Liberia, Sierra Leone, and Guinea.

On day two of the session, Teeko T. Yorlay, a founding member of the parliament, provided attendees with a brief history of the institutionâ€™s formation.

He said the parliament began in Sierra Leone with the support of the ministers of youth and sports of the three member states.

â€œI had three of my colleagues, at which time our annual budget was just US$3,000, and we thought that we could not have just the four of us serving the parliament â€“ calling ourselves parliamentarians,â€ Yorlay said. â€œSo we worked with USAID on a special project to decentralize the parliament.â€

According to Yorlay, the decentralization process of the MRU Youth Parliament officially took place in 2007 in Gbarnga, Bong.

He urged those volunteering with the parliament to continue to make the best of their time for the welfare of the movement.

Also speaking at the parliamentâ€™s session was the president of the Liberia National Student Union Nimba Chapter and a student at the A.M.E. Zion University, Abigail B. L. Freeman. She committed LINSU to the position of standing for peace as the nation prepares for a transition.

â€œWe want to take this time to stand in solidarity with our colleagues from the Mano River Union Youth Parliament to say that the Liberia National Student Union, especially the Nimba Chapter, commits ourselves to a peaceful transition, before and even after [these] elections,â€ she said.

Freeman called on all youth who were registered voters to make peace a priority in the upcoming elections.

â€œI will like to caution my other colleagues, especially the motorcyclist union, that the peace of Liberia lies in their hands,â€ she added. â€œIn order to persevere; in order to live a better life; and in order to enjoy our country, we need to put ourselves together to protect the peace this coming October 10, 2017.â€

Speaking to a crew of journalist at the close of the second dayâ€™s session, the chief of party of the Carter Center, Pewee Flomoku, said it was important to sensitize the youth on maintaining peace in the country as the country moves toward elections.

â€œThis forum is focused on enhancing the capacity of the youth in sustaining peace, and I think that is cardinal for Liberia at this time,â€ he said.

According to Flomokoon, it is the vision of the Carter Center to see a violence-free election.

â€œOur major activity is violence prevention as we go to the elections, before and after,â€ he added. â€œThatâ€™s why we brought these young people together to undergo a career training on sustaining peace and violence prevention.â€