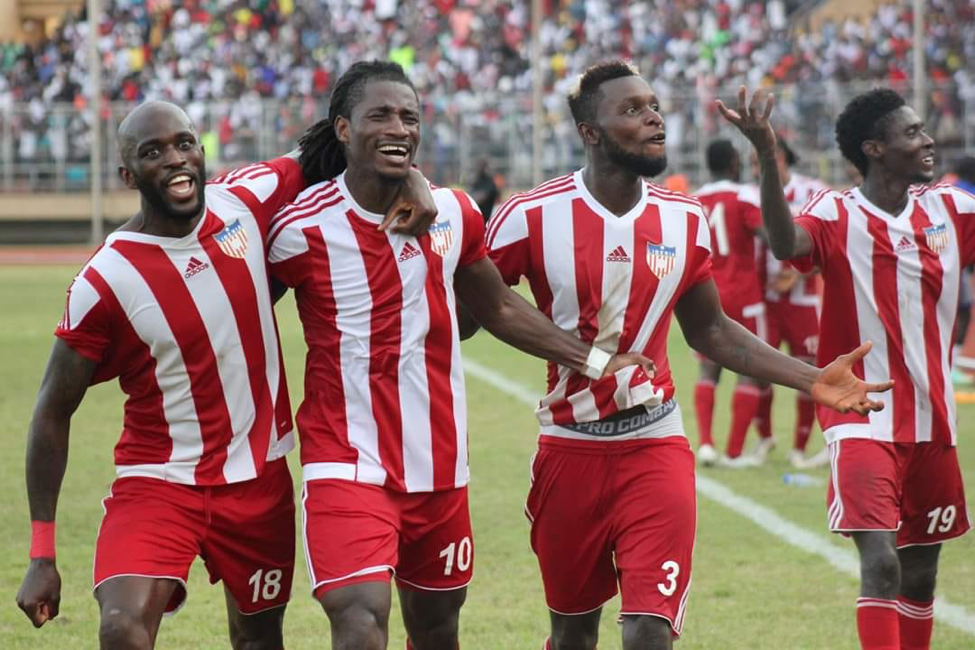 MONROVIA, Montserrado- The Lonestar of Liberia have taken a major step in qualifying for the 2019 African Cup of Nations, after defeating the warriors of Zimbabwe 1-0 at the Samuel Keyan Doe Sports Complex in Paynesville, on Sunday.

The win over Zimbabwe placed the team at second place of the table in Group G, a move that has rejuvenated the countryâ€™s hope to qualify for the continental tournament which will be hosted in Cameroon.

William Jeborâ€™s lone goal in the 72nd minute was enough to give Thomas Kojo his second consecutive win as head coach of the Liberian national team.

With Lonestar collecting just four points from their previous four games, a win against Zimbabwe was the aim to keep their dream alive for reaching Cameroon in 2019 competition. While Lonestar needed a win, it was an uphill task against Zimbabwe because the country was yet to concede a defeat in the qualifiers.

The Zimbabweans also, needed just a point from the game to book their place in the 2019 nations cup and the big names in their squad made them the favorites before the match as Liberia became the underdogs.

Zimbabwe touched down Monrovia with an 18-man squad that included top-notch players from across Europe and the South African ABSA Premiership where Liberia international, Anthony Laffor also plays. Their squad was boosted by Tino Kadewere that scored 8 goals and provided two assists for Djurgarden in the Swedish top tier in 2018 before moving to Havere in the French League 2 and Belgian base striker, Knowledge Mosuna that scored a hat-trick in the first leg on June 11, 2017, to help Zimbabwe beat Liberia 3-0.

With the big names in Zimbabwe’s team, the match appeared to be an uphill task for the Lone Star that is noted for conceding in almost every game played.Â However, the final whistle was blown with the underdogs celebrating while the match favorite had their hands on their heads as their fight for qualification continue until the final group games.

Thomas Kojo had to work without his influential forward, Sam Johnson who was ruled out with a knee injury as Kpah Sherman grabbed a starting spot up front with William Jebor. Mamelodi Sundowns’ forward, Anthony Laffor and Tonia Tisdell of Turkish League One club, Denizlispor started on the wings while the LISCR FC’s Allen Njie and Czech Republic top-tier club, Slovan Liberec’ midfielder, Murphy Oscar Dorley partnered in the midfield. With the Lone Star winning Congo Brazzaville in their previous home game on October 16, fans were encouraged as they pull in to watch the match that was to decide Liberia and Zimbabwe fate of reaching the nations cup. Unlike the match against Congo where President George Weah ordered free entries, fans bought their tickets and showed up to cheer their darling Lone Star to victory.

As expected, the match turned out to a difficult one for both teams that failed to create any clear chance in the first half. Both Liberia and Zimbabwe tried getting the curtain raised in their first half but failed after both teams played carefully.

Jebor managed to have a shot in the first 45 minutes but saw his effort wide off target while Khama Billiat and Knowledge Mosuna came close to putting Zimbabwe ahead but were brilliantly stopped by Liberia’s defense that worked tirelessly to prevent the team from conceding.

However, both teams returned from the break stronger as they tried breaking the deadlock in the early minutes of the second half. Kojo made his first substitution right at the start of the first half by introducing LISCR FC’ Kemoh Kamara for Alvin Marconnel who was injured. Kamara partnered with Teah Dennis in central defense as Lone Star went in search of the opener. Laffor nearly got the match’s first goal in the 63rd minute with a shot that was denied by Zimbabwe’s goalkeeper, Edmore Sibanda. Sibanda, from outside his penalty area tried clearing the ball off his danger zone but saw it landing in front of Laffor who struck on goal. Luckily for the Witbank Spurs’ goalkeeper, he was in the right position to stop the ball from reaching the back of his net. Still desperate for a goal, the Lonestarâ€™s coach introduced Spartak Moscow’s forward, Sylvanus Nimely who brought huge changes in the match. Seven minutes after his introduction, the Russian based managed to find Tonia Tisdell who was running down the left side of Zimbabwe defense for a beautiful cross that Jebor made used of to get it at the back of the net. Jebor scored his 12th goal in 14 games for the nationalÂ team to give the much-needed win. Now, it was Zimbabwe that was in search of a goal to seal their place for the 2019 African Cup of Nations.

With ten minutes remaining in the match, Kojo beefed up his team’s defense with the introduction of Barrack Young Controller’s Eugene Swen for Anthony Laffor.

Swenâ€™s introduction was the third for the Lone Star as Newcastle United U23 midfielder, Mohammed Sangare became an unused substitute.

The Lone Star held to their one-goal lead until the 90th minute as they grabbed the important three points on home soil. The win takes Liberia second in Group G with seven points from five games. They are a point behind league leaders, Zimbabwe.

Kojo’s men will need a win away at DR Congo in their last group game to qualify automatically. However, a point away at DR Congo can help the Lone Star reach Cameroon depending on the results from Zimbabwe and Congo Brazzavilleâ€™s game.

Just hours away from Sundayâ€™s game, a soldier of the Armed Forces of Liberia was shot and wounded by an officer of the Executive Protection Service, EPS.

According to a Ministry of Information press statement, the incident occurred at the Samuel Kanyon Doe Sports Complex during a scuffle between members of the armed forces and the EPS.