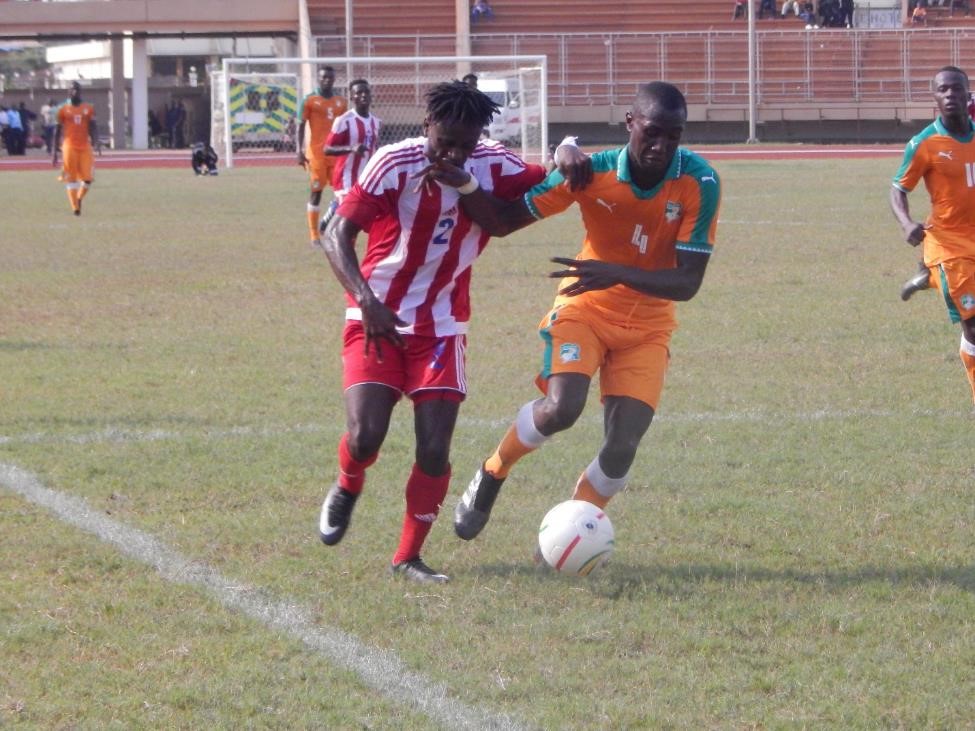 PAYNESVILLE, Montserrado – The 2018 West African Football Union Under-20 competition has kicked off with host Liberia being humiliated on an opening day in the presence of former football world player of the year, Pres. George Weah.

While Liberians were hoping that their past poor performances in past competitions would end now that they were hosting a tournament, it was the same sad story for Lone Star fans who went to see the junior Lone Star get whipped by the Baby Elephants of Cote d’Ivoire 3-0 at the Samuel Kanyon Doe Sports Complex.

Before the start of the match, the roster released by Coach Christopher Wreh raised concerns. With natural left-backs and right-backs Sebastian Tuckler and Lawson Kongo available for selection, surprisingly, two center defenders were deployed at the two positions to play while the original players for the position watched from the bench.

Wreh also started the match defensively, even though an attacking strategy might have helped feed off the home crowd’s energy. The former Arsenal striker began the match with two defensive midfielders, Allen Njie of LISCR and John Jaysay of Barrack Young Controllers, pairing in the center with attacking midfielder David Tweh in the midfield while central midfielder Sheku Sheriff observed from the bench. Matters appeared worse with the team playing with Watanga Football Club’s 5ft 5in striker, Chauncy Freeman, as the lone striker who was unable to win the long balls from the towering Ivorian defenders.

The players deployed and the tactics used by the technical bench put the team in a difficult position against the Cote d’Ivoire U-20 team that has had a series of training as test matches while preparing for their U-20 African Cup of Nations qualifier, a competition Liberia withdrew from inexplicably.

The first half ended without any goals, but it was the Ivorians who had the lion’s share of the possessions, with series of attempts which they failed to convert to goals because of LISCR FC’s goalkeeper, Ashley Williams, who pulled out a brilliant performance despite the defeat. Williams managed eight saves in the match to prevent the Lone Star from conceding more than the three goals conceded.

The Ivorians returned stronger in the second half to score three goals to sink Liberia in front of the home fans. It took the Baby Elephants five minutes to get the opener through Diabate Yolatie, who shot from a close range. Already, Lone Star was struggling to contain the Ivorians and matter got worse when they went a goal down. In search of an equalizer, Wreh made two changes, replacing LISCR FC’s forward, Edward Ledlum, with Bea Mountain striker Musa Kebbay, while center defender Daniel Paye was brought out for Lawson Kongo.

The substitutions did the opposite of balancing the match as the Ivorians gained total control and made no mistake in getting their second goal in the 77th minute when Tabi Bratiano scored on a defensive error by Liberia. Down 2-0, the match became more difficult for Wreh’s team, which was shying away from pursuing the goal.

They paid fully for their poor display on the pitch in the 87th minute when Cote d’Ivoire laid the game to rest. Diabate got his second of the match to make the score 3-0. Liberia was unable to get a single goal as they left the pitch bowing 3-0 to Cote d’Ivoire.

With the defeat on the first day of the competition, Liberia will need the maximum three points on Thursday when they face Guinea-Bissau at the Samuel Kanyon Doe Sports Complex.