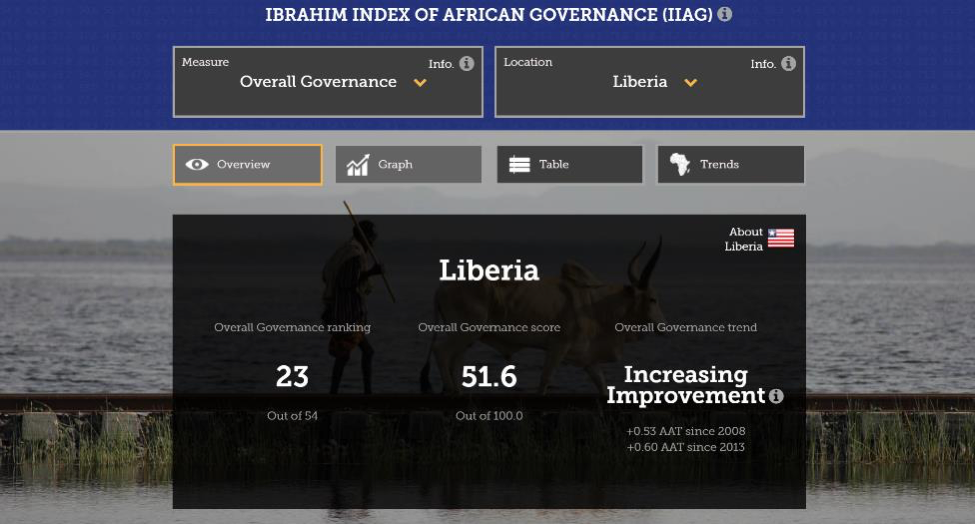 The Mo Ibrahim Foundation has released its annual evaluation that measures good governance across the continent. The latest iteration of the Ibrahim Index of African Governance shows Liberia having a slightly better than average ranking of the 54 African countries measured. Liberia ranked 23rd in Overall Governance â€“ a significant improvement from the first report published in 2007 when Liberia ranked 40th.

The Ibrahim Index uses four major categories to measure Overall Governance: Safety and Rule of Law, Participation and Human Rights, Sustainable Economic Activity, and Human Development. Those categories are broken into subcategories and subsequently, into indicators.

The index measures Liberiaâ€™s performance in 2017, the last year of former President Ellen Johnson Sirleaf being in power.

Safety and Rule of Law The Safety and Rule of Law category allows an assessment of how well governments were able to guarantee safety and personal security, using a series of sub-categories, including Rule of Law, Transparency and Accountability, Personal Safety, and National Security. Liberia ranked 21st in this category, sandwiched between Sierra Leone at 20th and CÃ´te d’Ivoire at 22nd. Neighboring Guinea was a distant 32nd place.

As the average African country has seen its Safety and Rule of Law score deteriorate over the past decade, Liberia remains slightly better than average.

However, Liberiaâ€™s score is suppressed by a poor performance in the Transparency and Accountability sub-category. This is not a surprising result, as Liberia consistently ranks in the bottom of the Corruption Perception Index. Liberia struggles with entrenched corruption and intrusive bureaucracy, in addition to limited accountability for those who abuse power.

Liberiaâ€™s Transparency and Accountability score is further lowered because of factors such as the limited access to legislative information. Liberiaâ€™s lawmakers make most of their crucial decisions behind closed doors and bills are not posted online or in a library for the public to view once they are introduced.

Additionally, a past Bush Chicken investigation showed that a system installed at the legislature to track votes by lawmakers is not used. Instead, legislators have stuck to voting on yeas and nays and relied on manual head-counts, which makes it impossible to get records of how individual lawmakers vote on bills and issues on the floor. The only records available with the manual headcount voting system are the numbers of lawmakers who voted for, against,Â or abstained.

The lack of transparency also permeates to state-owned companies and the lack of access to their records further dragged down Liberiaâ€™s Safety and Rule of Law score. The boards of public companies generally meet in secret, with no public access to minutes or other documents produced by these companies.

With President George Weah seeming to shun transparency and accountability, Liberiaâ€™s scores are likely to take a hit in next yearâ€™s Ibrahim Index. Liberia has generally performed well in this category, as former president Sirleafâ€™s lasting legacy on Liberia is the engendering of the respect for civil and political rights and freedoms. The Ibrahim Index calculates the Participation and Human Rights score based on three subcategories: Participation, Rights, and Gender.

On the surface, Liberiaâ€™s largely peaceful 2017 elections that saw the transfer of power from a ruling party to an opposition party reflected this freedom. Political parties were generally free to participate in the political process without fear, and citizens could join political organizations and vote without intimidation. Organizations such as the National Democratic Institute and the European Union found the elections to be peaceful and fair.

Liberia ranked 18th this year in this category. However, Liberiaâ€™s lack of progress in increasing womenâ€™s representation across sectors of society was a stain on its relatively high Participation and Human Rights score. This trend is likely to continue into President Weahâ€™s administration, as some groups have drawn attention to the low representation of women in the current government. The Ibrahim Index uses this category to gauge the extent to which governments facilitate their citizensâ€™ pursuit of economic goals. The index uses proxies such as the Business Environment, Public Management, Infrastructure, and Rural Sector.

â€œThe strong economic growth of the last decade has not created enough jobs for the African population,â€ the indexâ€™s report noted, adding that this category was on average, the worst for African countries.

Likewise, even as Liberia has attracted billions of dollars in foreign direct investment, a major complaint from citizens has been the lack of tangible outputs, such as jobs. Liberia ranked 35th in this category, worse than the average.

Liberia struggles in this category because of its poor transport infrastructure, deficient digital infrastructure, and limited provision of water and sanitation services. Additionally, Liberia received the lowest possible score for the bureaucracy and red tape experienced by businesses â€“ 0. This overall poor ranking in Sustainable Economic Opportunity is not a surprise, given that Liberiaâ€™s rank on the World Bankâ€™s Doing Business reports have been stagnant at 174th out of 190 economies since 2016. Liberia improved on its rank from two years ago in the Human Development category, from 45th place to the 38th place, still worse than the average African country. To arrive at the score for this category, the Ibrahim Index considered health, education, and welfare indicators.

It should come as no surprise to any Liberian that the country has some of the worst education statistics, including 17 percent of basic and primary school children being out of school. Even when children attend school, the quality of the education cannot be guaranteed, with mass failure rates reported for the University of Liberian entrance exams and the regional West African Secondary School Certificate Examinations.

On the health front, Liberia has some of the highest incidence of maternal mortality and children with stunted growth (32 percent).

Overall, Liberia ranks better than the average African country and improved incrementally in good governance. However, there are significant hurdles to improving the countryâ€™s ranking. Issues such as poor representation of women in government and entrenched corruption and a lack of transparency in government hold back Liberia from being among the best on the continent in terms of good governance.