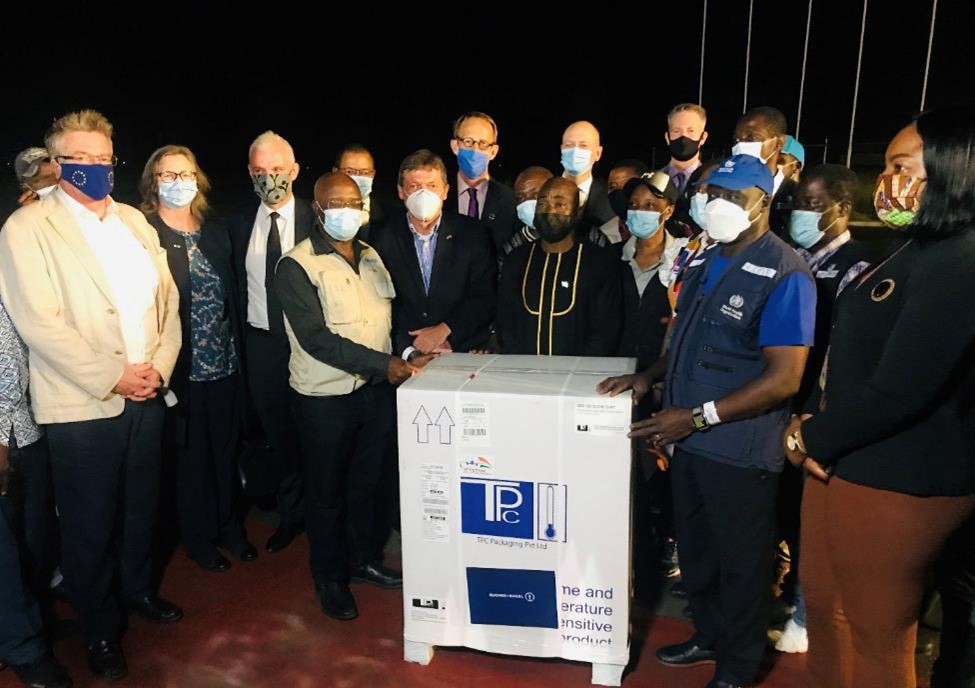 UNIFICATION CITY, Margibi – Liberia has received the first shipment of 384,000 doses of COVID-19 vaccine donated through COVAX, a global initiative to ensure fair and equitable access to COVID-19 vaccines for low and middle-income countries.

On Friday, March 5, 96,000 doses of AstraZeneca COVID-19 vaccines arrived in the country through the Roberts International Airport. The remaining consignment of 288,000 is expected to be delivered to the country over the next few months.

Receiving the consignment on behalf of the government, Foreign Minister Dee-Maxwell Kemayah praised the efforts of scientists for developing the vaccine and the country’s global partners for ensuring that Liberia is among the countries benefitting in Africa.

Kemayah, speaking at the airport, encouraged Liberians to show up for the vaccine when called upon and cautioned them against complacency in observing health protocols.

Health Minister Wilhelmina Jallah described the arrival of the first batch of the vaccine to the country as a historical moment and extended gratitude to those behind the efforts, including countries that continue to lend their support to Liberia.

Jallah said the Ministry of Health would ensure a fair distribution of the vaccine. Since the news broke out that the vaccine would arrive in the country, she said Liberians have been expressing their interest in being vaccinated against COVID-19.

“To our health care workers, we want to say thank you for the great job that you have been doing and help is on the way,” she added. “We want you all to be vaccinated so that you are protected because once you are protected, you can do more and help more people.”

Jallah stressed the importance of the vaccine and its safety and encouraged citizens not to harbor any fear.

“Don’t be afraid – the vaccines have been tested and they are ready for use,” she said.

According to her, there would be two doses of the vaccine given to each person. She said people above 60 years of age, health care workers, and people with conditions such as diabetes, hypertension, and kidney and heart diseases would be prioritized. She added that other professionals, including police officers, military personnel, ministers, and lawmakers, would also be prioritized.

The health minister said another shipment of vaccines was expected in May.

U.S. Ambassador to Liberia Michael McCarthy and dignitaries from the missions of the European Union, Germany, Ireland, Great Britain, and France all turned up at the airport to welcome the shipment, along with the United Nations resident coordinator.

Ambassador McCarthy congratulated the Liberian government on its continued commitment to reducing the transmission and halting the spread of COVID-19 in Liberia and in the region.

“Liberia’s successful fight against COVID-19 to date takes a critical leap forward with the arrival of vaccines to protect health care workers and the most vulnerable from this terrible disease. But the work doesn’t stop here. We hope Liberians will take the opportunity to receive safe and effective vaccines if offered,” he said.

“And, as always, we remind everyone to continue to wash your hands frequently, wear a mask, stay two arms-length apart in public and seek treatment if you feel sick. Together we can put an end to this pandemic.”

In a press release, the U.S. Embassy revealed that the United States had provided an initial tranche of US$2 billion to COVAX and would provide the remaining US$2 billion funding between now and 2022.

The U.S. ambassador said it was important to ensure that health workers are prioritized during Liberia’s vaccination campaign, given that they are the most vulnerable. He said USAID would support the Ministry of Health’s vaccination deployment plans, as the next steps would be the most critical to ensuring the vaccines get to those who need them the most.

He said the U.S. was committed to working with partners around the world to end the devastating global health and economic effects of the COVID- 19 pandemic.

In another press release, the European Union, together with E.U. member states represented in Liberia (France, Germany, Ireland, and Sweden), expressed their commitment to continuing their support to the Government of Liberia in the response to COVID-19.

The E.U. and its member states have committed over US$2.6 billion to COVAX.

As of March 3, Liberia had confirmed 2,023 cases of COVID-19, including 48 active cases and 85 deaths. While the country has not been significantly impacted by the pandemic as others have been, access to vaccines will dictate whether the borders of other countries will remain open to Liberians once the pandemic has receded.