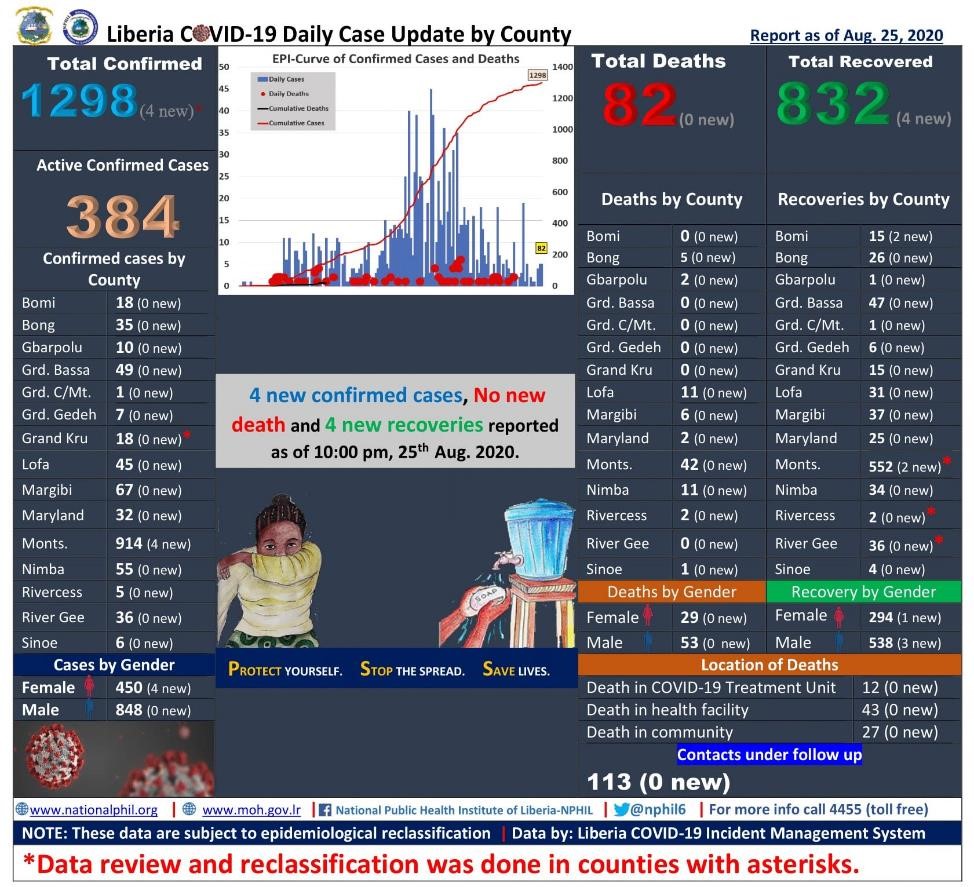 MONROVIA, Montserrado – Over the past month, Liberia has recorded a progressive decline in the number of new confirmed COVID-19 cases, signaling that the country may be making significant progress in the fight against the pandemic.

The weekly average for new confirmed cases is now at two new cases every seven days – which is comparable to the rate at the start of April, less than a month after the virus was first detected in Liberia.

Moreover, NPHIL said Bong and Gbarpolu Counties have gone more than 28 days without a recoding a new confirmed case, while Nimba, Grand Cape Mount, and River Gee Counties have all cleared their active cases and have started the 28-day countdown to be considered in “readiness mode”.

This is a stark change from July 15, when Liberia’s active cases peaked at 558 – and June 21, when the seven-day moving average of new confirmed cases topped 24. Moreover, just over a month ago, all counties had active COVID-19 cases.

The update provided by NPHIL on August 25 reported that there were four new confirmed cases (all in Monsterrado), 82 cumulative deaths (unchanged since August 12), and 821 total recoveries.

Even the country’s test positivity rate – a measure of how well the healthcare system is detecting new cases – is improving.

This number is simply the percentage of positive cases a country has identified so far, given the number of tests done. For example, having eight positive cases after testing 10 persons would indicate a ‘test positivity rate’ of 80 percent.

A rate too high may suggest that only the sickest patients who seek medical attention are being tested – that is, the health system is not casting a wide enough net to determine how much the virus is spreading within communities.

On the flip side, if a country has a low-test positivity rate, this means there is sufficient testing capacity and may even be detecting people who are asymptomatic, but who can still spread the virus.

The most recent situation report distributed by NPHIL is dated August 19 and shows, with 1,284 confirmed COVID-19 cases from a total of 15,077 tests conducted, Liberia’s test positivity rate is currently 8.52 percent. The rate has been steadily decreasing since July 3 when it was 10.49 percent.

However, Liberia’s test positivity rate needs to get lower to be within the acceptable range prescribed by the World Health Organization. The WHO has advised that governments should ensure that their test positivity rates reach five percent or lower for at least 14 days before they consider reopening. Liberia has essentially been open since late July when the last lockdown measures were lifted. More clubs and entertainment centers continue to open as the days go by.