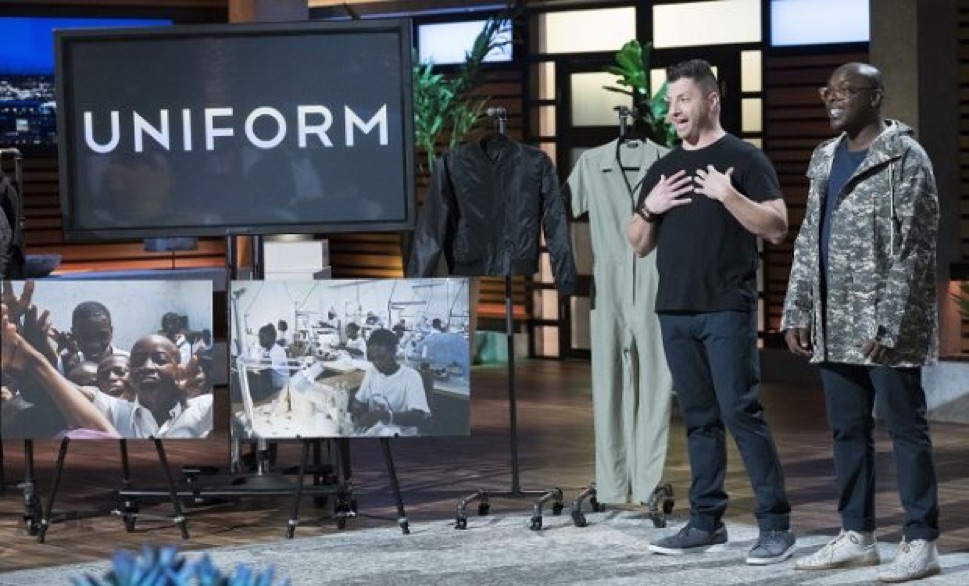 Chid Liberty appeared on the ABC show Shark Tank on Sunday, January 13 to pitch his company, UNIFORM, to investors, known as the â€˜sharks.â€™

He appeared alongÂ with his friend, Adam Butlein, to seek US$300,000 in exchange for 10 percent of the company.

Uniform currently sells clothing through its website and at Bloomingdales, the high-end American department store. For every purchase, the company says it donates a school uniform to a student in Liberia whose parents cannot afford one.

â€œMIT [Massachusetts Institute of Technology] did research and proved that if you give a child a school uniform, their attendance goes up by up to 62 percent and for every three young girls you give a school uniform to, two will delay their first pregnancy,â€ Liberty explained the rationale behind the companyâ€™s practice.

â€œAll over the developing world, kids are required to wear uniform to go to school, so this donation could mean an entire future for a child.â€

He clarified that UNIFORM was â€œnot a charity,â€ but a company built on ethical principles.

â€œIâ€™m from Liberia. I was interested in providing jobs to women after the war,â€ Liberty told the sharks.

He explained that the company had raised US$400,000 on Kickstarter, the online fundraising site, plus doing US$300,000 online and in retail stores last year. The company plans to launch a line of kids clothing at Target the next year, although Liberty clarified that there was no purchase order yet.

If Libertyâ€™s name or work sounds familiar, itâ€™s because he had already done something similar before. As he told the sharks, he had established Liberty & Justice several years earlier, which he noted was â€œthe first certified fair trade factory on the continent.â€

â€œWe ended up getting US$40 million in annual orders. It was a pretty amazing time for us, you can imagine,â€ he explained. However, this was just about the time the Ebola outbreak began and Libertyâ€™s previous company ended up shutting down.

All Liberty & Justiceâ€™s customers left and the company had hundreds of thousands of dollars in fabric that they needed to make use of, which brought the idea of using the fabric to make uniforms, leading to the founding of UNIFORM.

The two men distributed samples of the clothing to the sharks, who then asked questions about the company and its trajectory. The answers left the sharks convinced that UNIFORM was already on the right path.

In fact, Daymond John, founder of the clothing company FUBU, noted, â€œIt looks like in all areas, youâ€™re covered. What do you think we can do for you besides money?â€

Liberty then went on to pitch to each individual shark based on his knowledge of their strengths and portfolio, to which billionaire Mark Cuban replied, â€œYouâ€™re a great sales guys. Youâ€™re just like, bam, bam!â€

John seemed the most conflicted and most likely to invest of all the sharks; however, he cited his concern over a retail-heavy presence as opposed to a more online focused business. In the end, he declined to invest in UNIFORM.

â€œSo guys, my number will be available for mentoring but I donâ€™t think I can help you in this instance,â€ he said.

Even without an investment, the appearance on the reality show was a major public relations boost for a brand that was already in stores and online, as it received exposure to millions of new potential customers.