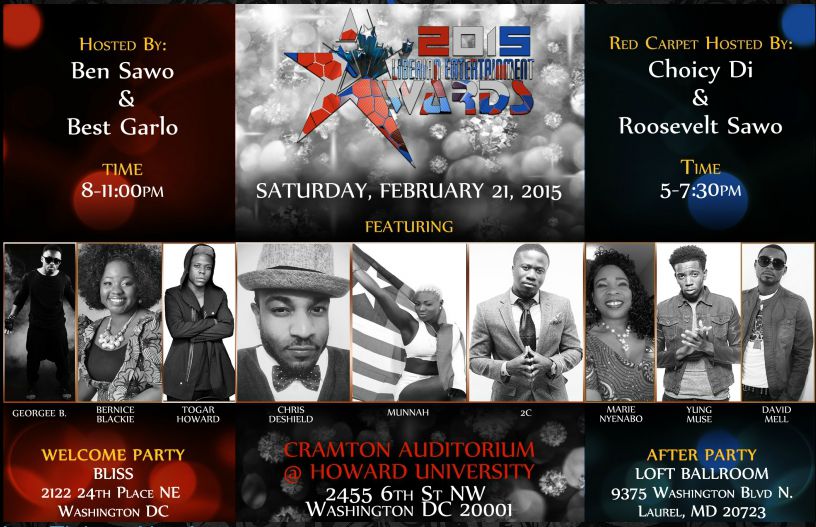 The 7th annualÂ Liberian Entertainment Awards will be held this Saturday, February 21 in Washington, DC. We have compiled for you a selection of artists, performers and designers who have been nominated in each category. Let us know who you think should win.

Foreign Ward was born in Monrovia and raised in Philadelphia, PA. He and his family immigrated to the US at age seven. His recent hits are “Party” and “1hunnit.”

Bryan Doe was musically influenced by his father, a preacher. He began his music journey involved in church and choir. His most recent hit is “Keep Loving You.”

Pity D’Best grew up singing in his church and continued honing his skills throughout. His biggest hits are “Follow Me” and “Scatter my Head.”

Togar Howard first entered the entertainment world with his dancing and choreography skills. He later diversified to incorporate singing. His biggest hits are “Basima Basima” and “Jolie.”

Born in Buchanan, Lady Mouthphy is a budding artist who first saw her star rise as participant on a reality TV show in Ghana. She’s best known for her hit, “My Life.” Â “Killer Bean and Falcao,” directed by Douglas I. Enogieru

Al Johnson is a Liberian actor premiering in a breakthrough role in the movie Black Money. Al has done commercials, ad campaigns, and appeared on the US television show, C.S.I., New York.

Artus Frank has produced, directed and starred in many films from the Liberian, Ghanian, and Nigerian film industries.Â He has also won many awards in within those industries including the Nollywood Star of the Year from Hall of Grace Awards and Best Supporting Actor at the City People Entertainment Awards in 2012.

Josephus Tolbert, an actor and model, graduated from A.M.E. University and has starred in many Liberian, Ghanaian, and Nigerian films including “True Lies,” “Touch My Body” and “Lines of Deception.”

In addition to acting, Joseph C. Weah has served as model for Cellcom. He also contributed to the “Ebola is Real” video.

DenG released one of the biggest songs to dominate Liberian culture this past year, “They Vex.”

David Mell rose to fame with the hit “Carry Your Load.” Over the past year, his biggest hit has been “This Love.”

The ever eccentric MunnahÂ had her biggest hit this past year in the party anthem, “Celebration.”

G-Rize has opened for some of Africa’s biggest stars and has some of the highest Youtube views amongÂ Liberian artists. Some of his hits within the past year are “LIB Ladies” and “Forever Luv”

Jodi has been a constant on the Liberian music scene over the past few years. One of his recent hits is “Butterfly.”

Kanvee Adams, most famous for “You Will Carry My Load,” has released “Heart Desire” and “On the Cross to Redeem Me” over the past year.

Bernice Blackie initially took the country by storm with “U Na Do It Again.” Over the past year, she released “I Feel Your Pain.”

Fatu Zeon is best known for “Who is Behind This.”

Ivan P is known for his track, “Nothing is Too Hard for God.”

Eveine Natt Kamara is most famous for “Dependable God.” Song of the Year

All images are the property of their respective owners and were sourced mostly from the entertainers’ social media pages. Information about some artists was also sourced from ireplib.com.Â

22 hours ago by Teahwleh Clarke Geeplay

14 hours ago by Africa Center for Strategic Studies