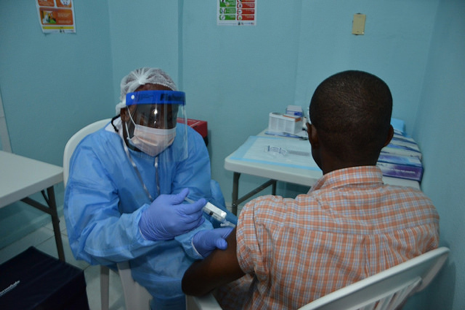 MONROVIA, Montserrado – The Liberian government has begun administering the trial ZMapp vaccine to patients in the wake of the latest outbreak of the deadly Ebola virus in the country.

In February 2015, the American-based National Institutes of Allergy and Infectious Diseases disclosed that it and the Liberian government had launched the first clinical trial of ZMapp, a monoclonal antibody treatment that has been used on an emergency basis to treat some Ebola patients, especially sick American health workers who were evacuated from the outbreak region.

Sorbor George, Director for Communication at the Ministry of Health and Social Welfare told The Bush Chicken on Monday that health authorities have begun administering the vaccine to two children, of ages 5 and 3, of a 30-year-old woman from Guinea and victim of the latest Ebola outbreak in the country.

He said the 5-year-old boy is responding to treatment, pointing out that the child is now able to walk around for the past days.

“We are very optimistic that the children will be counted as survivors of the newest Ebola outbreak in the country,” George maintained.

According to George, the two children are the only two confirmed cases Liberia currently has, noting that they are improving gradually at the ELWA Ebola Treatment Unit 2. He said health authorities are encouraging those persons currently under the voluntary precautionary observation to also be vaccinated against Ebola.

Though George did not specified which Ebola vaccine is being administered to those under the voluntary precautionary observation, he noted that some of them are still skeptical about the vaccine.

“The Ministry of Health has increased its public awareness to make Liberians to understand that the vaccine has no side effects and has been approved by the medical board of Liberia and international drug board,” he said.

Several families of the affected Kemah Town community in Soul Clinic told The Bush Chicken that they would not allow health authorities to administer the vaccine to them because they do not know the side effects of the vaccine.

“We do not have Ebola and are not going to agree with health authorities to administer the vaccine in our house,” a representative of the families said.

The families noted that they had been under voluntary precautionary observation for 11 days without any sign of the virus in their house and as such there was no reason to administer the vaccine to them. Residents at the home of the newest Ebola victim’s sister. Photo: Zeze Ballah

George indicated that the government is very optimistic that there will be no recurrence of the virus into the country, adding that “the government certainly has the capacity to contain any new outbreak of the epidemic.”

He noted that the government also currently has in place a 35-bed capacity with 30 at the ELWA ETU and 5 at the Redemption hospital to address additional cases of the deadly disease in the country.

Explaining further, the Health Ministry’s Director for Communication said over 800 disease surveillance officers had been trained and stationed at the various border points across the country.

“The surveillance officers are carrying on routine checking and screening of people entering Liberia through the borders,” he asserted.