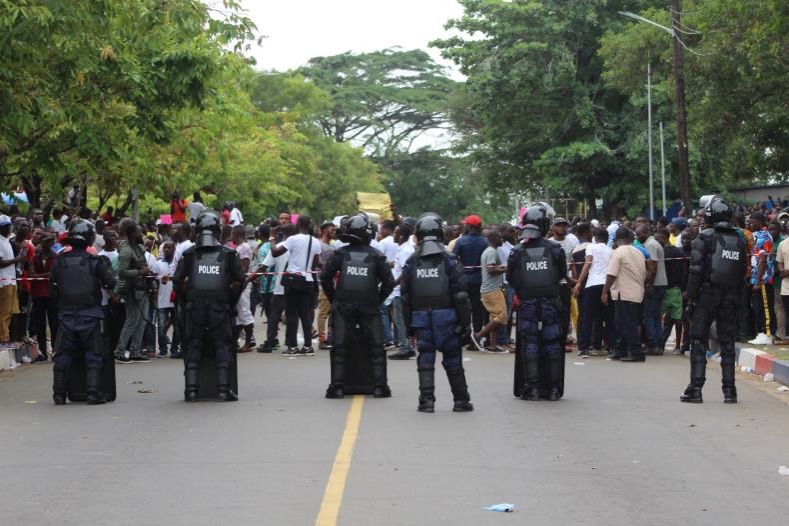 Hundreds of protesters converged on Capitol Hill, the seat of the three branches of government, to voice their grievances and resubmit a petition previously issued during a June 7 protest.

The protesters gathered from different parts of Monrovia and other locations in the early hours of Monday, Jan. 6, chanting and singing anti-government slogans in the face of huge security presence. The gathering was peaceful until late afternoon when protesters began to light coal pots to cook food for the crowd.

At exactly 5:00 p.m., the police intruded into the protest grounds and began firing tear gas, shooting water and deploying brute force to disperse the protesters. It has been reported that Rep. Yekeh Kolubah of Monsterradoâ€™s tenth district, an advisor to the protest leaders, had alerted his fellow protesters to imminent police action minutes before the incident occurred.

Except for Rep. Kolubah, many of the protesters quickly fled the protest scene, as police moved on them. Many protesters became unconscious as a result of teargas, while others sustained injuries while trying to escape. A number of protesters, including women, were arrested.

The spokesperson of the Liberia National Police, Moses Carter, has not responded to The Bush Chickenâ€™s requests for comments.

In a hastily organized press conference called immediately following the protest, Costa denounced the police actions as â€œreckless, violent and unprovoked,â€ vowing to continue to press on with anti-government actions. He said his group would issue a formal statement tomorrow, January 7, about yesterday’s events.

One protester who lives in Central Monrovia, Edison Flomo, said the gathering was peaceful and there was violence at the time the police began dispersing the group.

â€œThe police cracked down on us while [we were] exercising our rights to peaceful assembly,â€ Flomo said. â€œWe started peacefully and have remained peaceful throughout our gathering. The world needs to see this violation of our rights. The government we elected is now infringing on our rights are given to us by the constitution they promised to uphold, defend and protect.â€

Alicia Doles, a protester who said she is a member of the presidentâ€™s Coalition for Democratic Change, described the chaotic result of the police action as â€œsabotage of the peaceful exercise of their constitutional rights to gather and protest policies of the government.â€

Doles believes the protest was a further test of the strength of Liberiaâ€™s democracy until the police forcefully intervened to disperse the protesters.

â€œWhoever advised the police to do what it did might have done so on selfish aims. But it spoiled the governmentâ€™s record because it promised to provide security and protect the protesters,â€ she said.

Protest leader and radio talk show host Henry Costa had earlier told journalists that the Council of Patriots would continue its protest until President George Weah and his government began addressing a list of concerns presented to the government following the previous protest held on June 7, 2019.

â€œWe are talking about the US$25 million [mop-up fund] report, which we know has been completed. But you know itâ€™s damaging, but the government has refused to publish [it] because it is damaging, and we want prosecution, we want a further investigation into the infusion of the L$16 billion into the economy,â€ he said.

â€œWe know that Mr. [Milton] Weeks and Mr. [Charles] Sirleaf are being prosecuted for the L$1.9 billion unauthorized printing, right, but not for the L$16 billion [and] how it was infused. We also want the president to publish his assets â€“ the inexplicable overnight acquisition of wealth, we want to know.â€

The Council of Patriots has also demanded the issuance of a broadcast license to Punch FM and immediate reopening of Roots FM, among other demands.

With yesterday’s heavy-handed police action against protesters, it is unclear if further protests will be staged tomorrow as originally announced by the Council of Patriots.