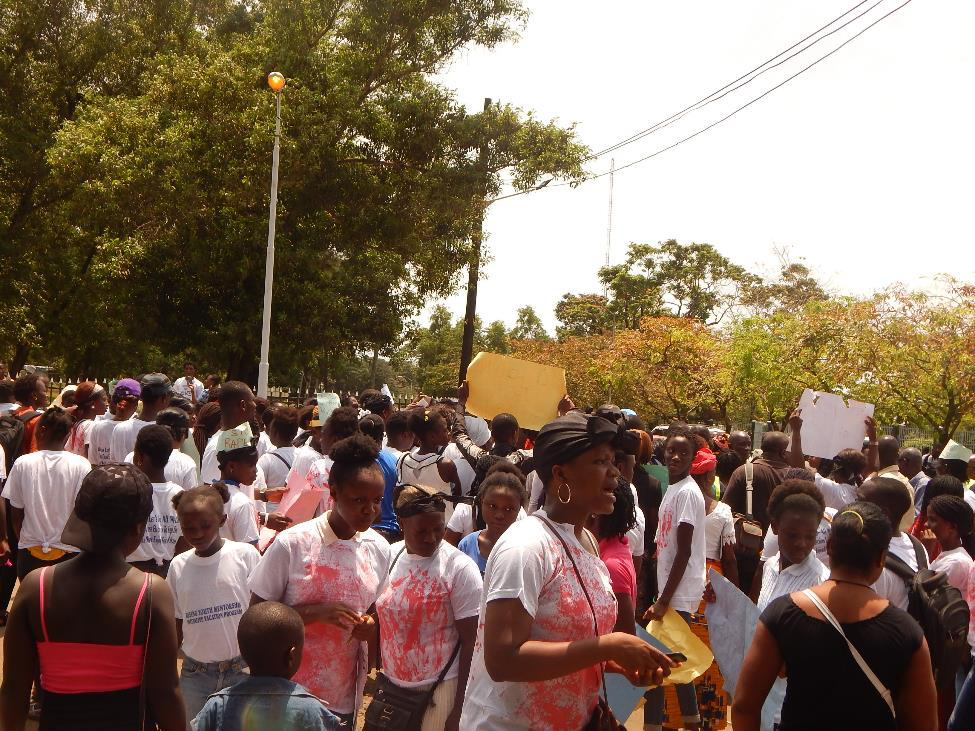 MONROVIA, Montserrado â€“ Women representing different organizations in Liberia continue to register their displeasure with the recent amendment to the rape law by the Senate.

The Liberian Senate recently voted to amend the Rape Law, making rape bailable for all offenses and granting parole to convicted rapists.

Since then, women have staged a peaceful march from Paynesville to the grounds of the Capitol Building through the streets of Monrovia, displaying posters and chanting slogans against rape.

The walk ended at the entrance of the home of the National Legislature where they had gathered to raise their concerns with the lawmakers.

In their position statement, the women said the two major amendments defeat the purpose of having a law that would deter perpetrators, especially in the midst of the high rate of the crime.

Although there is a court in Monrovia responsible for trying cases involving sexual violence, the women are calling for more efforts in that direction.

â€œWe call on lawmakers to be progressive by ensuring budgetary allocations and policies that further invest in the implementation of the law such as the establishment of county levels [sexual and gender-based violence] crimes unit and branches of Criminal Court E, invest in forensic technology for the preservation and gathering [of] evidence,â€ they wrote.

â€œBy this, we request that [lawmakers] commence a process of external engagement and consultations with stakeholders in the womenâ€™s rights sector, the Association of Female Lawyers and other justice/protection groups to get concrete indications of the impact of the rape crisis on women and girls across Liberia,â€ they advanced.

The activists also emphasized specific concerns to the current prevalence of sexual violence and the stateâ€™s obligation to addressing the human rights and public health crisis.

No member of the legislature was available to listen to their concerns on the amendment, apparently because it was not a session day and the protest was held just a day before nationwide elections.

Lakshmi Moore, ActionAidâ€™s country director and a member of the Liberia Feminist Forum, said the lawmakers were earlier notified and assured that they would meet with the women on Monday.

Moore said although the lawmakers have cleverly continued to ignore their plight, the protest was successful.

â€œWe want to tell our representatives that election is tomorrow; when we come back from election, we will be here. They should not amend the law,â€ she said.

Moore said their aim for the march was to send out a warning to the lawmakers that the women of Liberia were prepared to fight against the amendment.

â€œWe find it very disappointing that they waited toward the end of the government when everybody is concentrating on the elections,â€ she added. Women are calling on lawmakers to vote against the new amendment, noting that it is not in the true spirit of justice and equality. Photo: Gbatemah Senah

The executive director for the Women NGO Secretariat of Liberia, Marpue Speare, said the action of the senators undermines the achievements of womenâ€™s rights organization, since 2005.

Although the current law does not address every challenge with fighting to end rape in the country, she said it marks a milestone in the history of their advocacies.

The current law, which was passed in 2005, was drafted with the contribution of the Association of Female Lawyers of Liberia.

The law in its current state also provides for gang rape and most importantly, makes it a first-degree felony offense. It also extends the list of capital offenses under Liberian laws to include first-degree rape as a capital offense, hence non-bailable.

The Association of Female Lawyers of Liberiaâ€™s President Vivian Neal said, although the senators are yet to release a copy of the draft amendment to them, their action is intended to weaken the current law. Neal disagreed with the Senate’s press statement that the punishment for rape in the 2005 amended law is excessive, thus, unconstitutional. Photo: Gbatemah Senah

She said while first-degree rape is treated under the law as a capital offense, therefore non-bailable, the same law allows bail for an accused if the proof is evident and the presumption is great because there is insufficient evidence to indict the accused.

â€œRape can be bailable depending on the gravity of the case,â€ she clarified.

According to her, the activistsâ€™ issue with the Senateâ€™s action is making rape in entirety a bailable offense without any condition attached.

â€œItâ€™s like they are talking more for the perpetrators than the victim,â€ she stressed.

She said if the current amendment is not resisted, the law will favor mostly wealthy perpetrators of rape who can easily afford bond fees.

The Liberian Senate voted during its 60th day sitting of the sixth session to pass a bill submitted by Sinoeâ€™s Sen. Milton Teahjay to amend the current rape law, making the act a bailable offense.

While most of the senators were on official break during the vote, the standing rules governing the body grant for a simple majority of the senators duly seated to constitute a quorum.