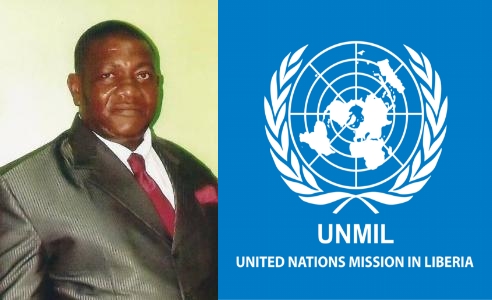 GANTA, Nimba – The Pro Tem of the Liberian Senate, Armah Zulu Jallah, has called all citizens of the country to remain focused on peace and security as the United Nations Mission in Liberia draws down its security force in the country.

UNMIL will start to cut down their military force in Liberia in order for the government to take control of the countryâ€™s security by June 2016.

Jallah said, with the drawdown of UNMIL, it is the responsibility of every Liberian to maintain the peace of the country. He made the declaration over the last weekend in Ganta when he served as keynote speaker at the induction ceremony for officers of the Garr-Kwa-Do Organization.

â€œUNMIL is going to start drawing down her troops by next year June,â€ Jallah said. â€œThis will be a critical time in the history of our country and for us Liberians. We all must [maintain] this peace weâ€™ve enjoyed for the past 10 years.â€

â€œSustaining the peace, following UNMIL departure is very much import to us Liberians,â€ Jallah said. â€œHowever, this can only happen depending on our sincerity and commitment in keeping this peace.â€

Liberia has enjoyed a high level of peace and stability for more than a decade since the United Nations peacekeeping force took charged in 2003, following a bloody civil unrest that lasted for 14 years in the country. UNMIL has been maintaining peace and security while the country transitioned from an interim government, through the period of holding its first and second presidential elections in 2005 and 2011, respectively.

â€œI call on every citizen to build an institution of peace wherever they find themselves, be it in the church or Mosque,â€ Jallah said. â€œTo preserve this peace, we need to respect the rights of each other, under the laws of Liberia. We cannot afford to go back to where we came from: seeing ourselves into another scenario of April 12, 1979 or April 6, 1993. This is something we cannot allow anymore.â€

Jallah admonished Liberians to be good and law-abiding. The Gbarpolu senator was recently elected to the post of Senate Pro Tem after winning elections against senators Joseph Nagbe and Oscar A. Cooper of Sinoe and Margibi Counties, respectively.

Jallah is the fifth senator to serve the post since January 13, 2006, following Isaac W. Nyenabo of Grand Gedeh County, Lahai G. Lansanah of Bomi, Cletus S. Wotorson of Grand Kru and Gbehzohngar M. Findley of Grand Bassa. Election to the post of Senate Pro Tem is held among the 30 senators of the 15 sub-political divisions of the country every six years.