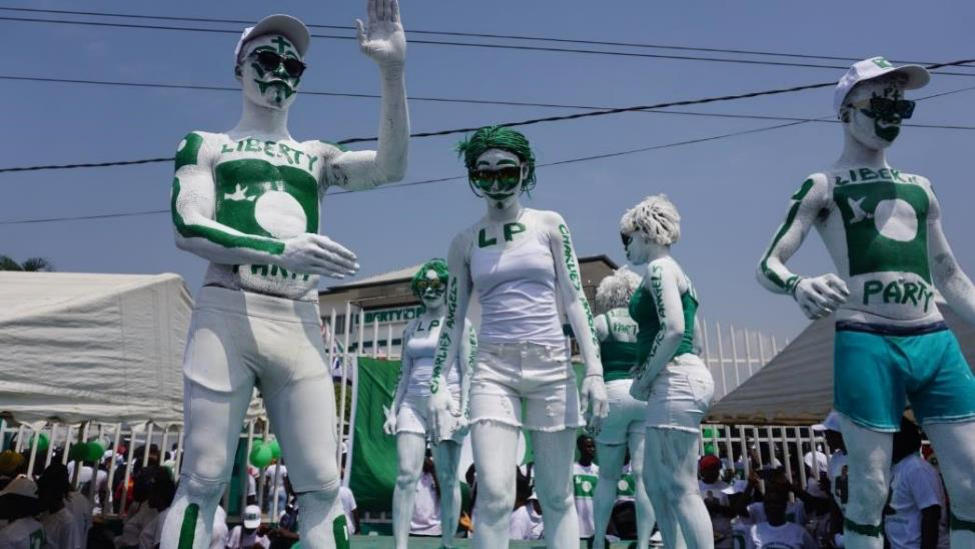 CONGO TOWN, Montserrado â€“ Several leaders of Liberty Party have spoken on the partyâ€™s behalf to endorse the Coalition for Democratic Changeâ€™s George Weah for the December 26 runoff presidential election, although there appears to be confusion as to whether the partyâ€™s other leaders support the decision.

The announcement was made public during an endorsement ceremony at CDCâ€™s headquarters on Thursday. Liberty Partyâ€™s National Chairman, Benjamin Sanvee, spoke on behalf of the party, in the presence of other officials, including the Vice Standard Bearer Harrison Karnwea, Campaign CEO Musa Bility, and the partyâ€™s coordinator for Montserrado second district, Jurue Sando.

Sanvee described the endorsement as one from their consciences, driven by the change the Liberian people have yearned for in the last two years, which according to him is now seen in the CDC.

He praised members of Liberty Party who are standing with them in their decision, although acknowledging that the party was not represented in full at the endorsement ceremony.

â€œItâ€™s a testament to how far we have come as a nation, when we can practice democracy even within our institutions, when people can disagree yet still live together,â€ he said.

Sanvee said it was time for the right change to take place in Liberia, and that Liberty Partyâ€™s leaders were proud to be a part of the making of history.

He called on Weah and his vice standard bearer, Taylor, to understand the responsibility they are about to assume, while also remembering that his story is similar to those of the ordinary Liberians.

â€œThe only difference between you and those young men and women that are walking out there is that God blessed you, and he blessed you through your legs; that you went forth and did wonders and you conquered the world. My message to you Mr. President: do not let your people down,â€ he added.

Sanvee said the action to endorse CDC was in fulfilment of the opposition solidarity that Liberty Party committed to during the Ganta Declaration, which calls for opposition members to support each other.

He also called on CDC to be grateful and humble, and to accept victory with magnanimity, and understand that they are only the choice for today and not better than others in the contest.

â€œWe accept that our primary responsibility right now is to retire you, and we will retire you honorably,â€ he said.

Toga McIntosh, the chairman of the CDC Campaign, accepted the endorsement on behalf of the party and officially welcomed Liberty Party officials to the CDC campaign.

For his part, Weah promised to live and work diligently for the people of Liberia if he is elected as the countryâ€™s 24th president. He attributed his strength to resilience and commitment since he joined politics in 2005.

According to Weah, under his administration, Liberians will never be left by the wayside if they work to make the government work on their behalf.

He told Liberians that under his leadership, the government would be a government for the people; they therefore must work even after the election and inauguration.

Weah encouraged Liberians not to be afraid to fail in life, as it was part of life everywhere, and added that having the mindset that one will fail is a recipe for failure.

He promised that if elected, we would work with lawmakers to address difficulties facing Liberians.

The CDC Standard Bearer also disclosed that while he would not be physically present at various ministries of the government, he would make good decisions and properly monitor to ensure that the government works in the interest of the citizens.

He called on partisans and supporters of the coalition not to celebrate too much during the Christmas holiday, as voting will occur on the day after Christmas.

In the current stage of the election, Weah told the gathering of partisans and supporters that they have achieved 99 percent of their goal, but that the remaining one-percent, he added, was the most delicate and tedious one to achieve.

â€œThis one percent, we need to wake up, we need to be ready; we need to be prepared and we need to send a signal around the world to let governments know that the people are resolved,â€ he noted, referring to the runoff election on December 26.

He criticized political leaders who are leaving their supporters to take their individual sides in the runoff election, rather than providing direction to them as leaders.

â€œI donâ€™t want to criticize whatever you say, but as a leader, you must not allow your people to do what they want to do, go where they want to go,â€ he said.

According to him, leaders who believe in democracy and want to build institutions cannot allow their support base to go on guideless in all directions.

Liberty Partyâ€™s decision to support CDC came barely two days after the National Elections Commission announced the date for the runoff election between the Unity Party and Coalition for Democratic Change as December 26.

The election was originally set for November 7 but was delayed due to a writ of prohibition filed by Liberty Party to the Supreme Court because of alleged irregularities and fraud.

The Supreme Court, after ruling into the case on Thursday, December 7, ordered the National Elections Commission to proceed with the presidential runoff election between the Coalition for Democratic Change and Unity Party.

During the endorsement ceremony at the CDC Headquarters, a heavy security presence was seen at the Liberty Party headquarters, likely because a group of partisans who were unhappy with the decision of the partyâ€™s executives to endorse the CDC.

Prior to the endorsement, a splintered group of the leadership of the party, including the deputy secretary for press and public affairs, Kla Toomey, released a position statement on Wednesday that the party had not reached any official position amid rumors of the partyâ€™s then pending endorsement of the Liberty Party.

â€œLiberty Party uses this medium to inform all of it partisans and supporters of the Brumskine-Karnwea 2017 ticket that the party has reached absolutely no decision on who to endorse for the pending runoff election,â€ the statement read.

The statement also revealed that the party was encouraging all its supporters that were consulting with either the CDC or UP to return to the party for a concerted conversation on which direction the party is expected to go in the impending runoff upon hearing thee mandate.

It also warned that any endorsement done in the name of the party would be null and void, unless that endorsement is an outcome of the ongoing consultations.

Liberty Partyâ€™s Standard Bearer Charles Brumskine is currently out of the country and is expected to return on Friday, according to inside sources. The statement issued on Wednesday and the absence of Brumskine, Darius Dillon, and Toomey from the announcement on Thursday have, however, raised questions on the legitimacy of the endorsement.

An inside source has told The Bush Chicken that an official rebuttal to the endorsement will likely be issued on Friday.