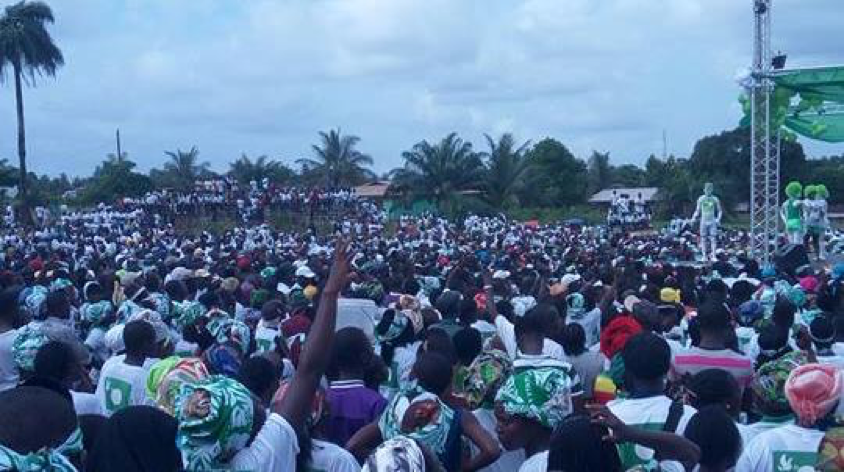 BUCHANAN, Grand Bassa â€“ Liberty Party has launched its campaign in Buchanan with several thousands of supporters in attendance over the weekend.

On Friday, September 22, 2017, some supporters of the party were brought from the five electoral districts of Grand Bassa to the headquarters in Buchanan for the launch on Saturday, September 23.

Incumbent representatives and candidates supporting the party mobilized supporters and residents of the county from their various districts to assemble in Buchanan and wait along the road to welcome standard bearer Charles Brumskine and running mate Harrison Karnwea.

Brumskine and delegates were first welcomed to Grand Bassa traditionally by chiefs and elders, including the deputy speaker, Rep. Hans Barchue, at the Farmington River Bridge, which separates Margibi and Grand Bassa. Other residents were seen at major towns along the route in large numbers.

Brumskine and supporters paraded through the principal street of Buchanan from Benson River to Roberts street and back to the Fairground where the party officially launched its Grand Bassa campaign.

Speaking at the launch, Brumskine thanked residents of the county, adding that the huge turnout clearly indicates that they need real change in government.

He said a Liberty Party government would restore the hope of Liberians in term of job provision, human resource capacity building, and deliver them from poverty.

â€œThis shows to me that my people are behind me and I will not make you shame if you send me to the executive mansion,â€ Brumskine told the crowd at the fairground.

The Liberty Party political leader advised his followers to show their support on October 10 at the ballot box.

Grand Bassa is known as the stronghold of Liberty Party based on past election results and also because it is the home of its standard bearer, Brumskine.

The party has won more seats in the county than any other party in recent times and the two senators, Nyonblee Karngar-Lawrence and Jonathan Kaipay, both belong to the party.

The partyâ€™s main contender in the county has been the governing Unity Party, but it appears that a split among Unity Party leadership at the county level and the resignation of former Senator Gbezohngar Milton Findley has reduced pressure on Liberty Party within the county.

According to the National Elections Commission, the county registered a little over 145,000 voters, making it the sixth largest county in terms of registered voters.