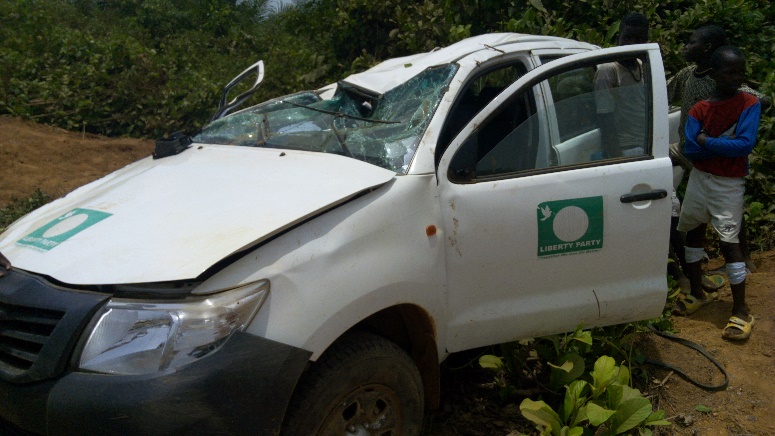 Matthew Walley after the accident: photo by Eric Doue

Matthew Walley was traveling from River Cess to Grand Bassa on Thursday, March 24, at about 10:45 a.m. in Chea Town when the incident occurred. He was about 5 km away from Buchanan when the accident flattened the front windshield of the Liberty Party-branded Toyota pickup.

Walley was reportedly on his way to Buchanan to purchase food items because Liberty Partyâ€™s standard bearer, Charles W. Brumskine, was due in River Cess the next day.

Several eyewitnesses who saw the crash said the accident was due to excessive speed, as they described a car maintaining speed as it approached a curve.

“l saw the pickup running with heavy speed and it passed by me. Later, I just saw it rolling on the other side of the road,” one eyewitness said. “That is how we ran there and took the people from under the car and sent them to the hospital in Buchanan.”

Walley and the other passengers who were in the car were taken to the Liberian Government Hospital in Buchanan for treatment.

At the hospital, Walley told The Bush Chicken that he bled from both ears and experienced severe pains in his chest and arms. The health workers attending to him, however, said he and the others were responding positively to the treatment.