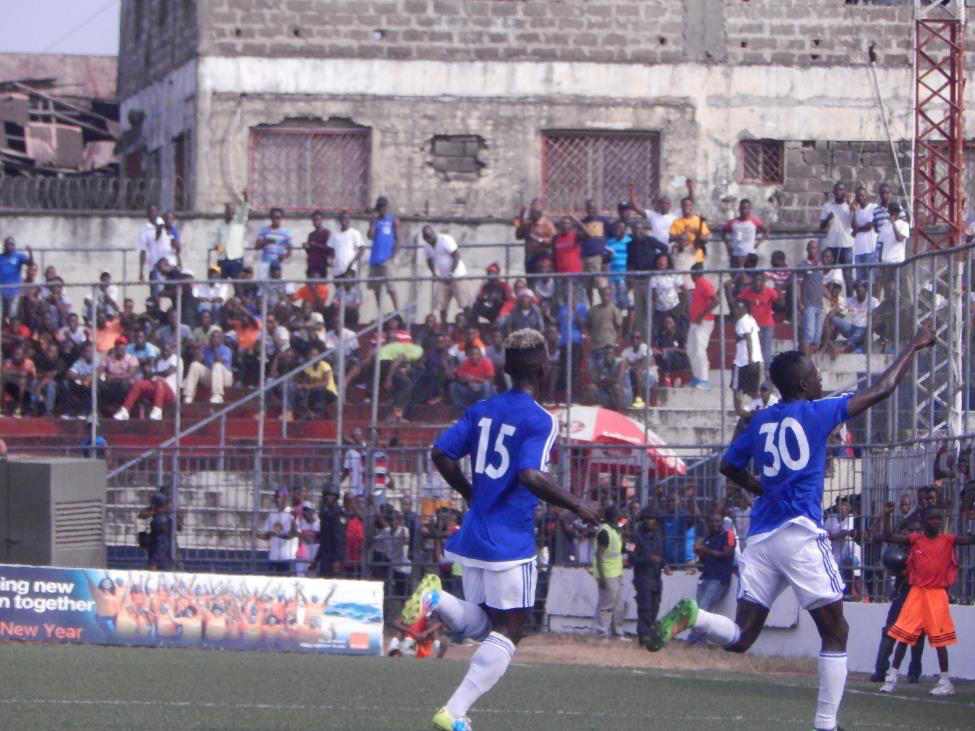 MONROVIA, Montserrado â€“ Despite being the underdogs, LISCR Football Club went against all odds to beat Sudanese Premier League Champions, Al-Hilal, a team that has made over 30 appearances in the CAF Champions League.

The Liberian champions made sure they collected all three points on home soil as they went on to grab a narrow 1-0 win over the visitors. Sheku Sheriff scored a goal from a set piece at the edge of the penalty box. That proved to be the difference between the two teams after the full 90 minutes.

The match began with fireworks from both sides, with both teams showing their intent to score. However, none was able to create a clear chance until the 18th minute when LISCR FCâ€™s Gambian attacker, Bully Drammeh, was fouled at the edge of the penalty box. Center referee Firmino Bassafim awarded LISCR FC their first set piece of the game.

From the tight left corner of the box, Mark Paye and Sheku Sheriff stood over the ball as the fans began to chant, â€œWe want goal.â€

Sheriff stepped up and took the set piece, which he converted to a goal. The former Gardnersville star player curved the ball in the upper left corner of Al-Hilalâ€™s goal to beat Cameroonian goalkeeper Loik Maxime.

Sheriff got the goal in the 20th minute to score LISCRâ€™s first ever CAF Champions League goal on home soil. Five minutes after the break, it was another golden opportunity for LISCR, who missed the chance of doubling their score to have a comfortable lead. Striker Mark Paye beautifully collected a pass from Allen Njie, but failed to beat Maxime in goal as he struck wide off target.

The Sudanese were undaunted by LISCRâ€™s goal and went in search of an equalizer with a beautiful display of the ball on the pitch. However, Hilal closed the first half down by one goal.

Like the remaining minutes in the first half, the early minutes of the second half were challenging for LISCR, who struggled to contain their visitors. Daniel Woto, who controlled LISCRâ€™s left side in defense, struggled to prevent the visitors from reaching his box and was soon substituted by Coach Tapha Manneh who brought on Hilton Varney.

Manneh later introduced the Liberia National County Meet Most Valuable Player, Edward Ledlum, and Prince Urey for Amadiah Kawah and Mark Paye, respectively, to balance the play on the pitch that was hugely controlled by Hilal.

Mannehâ€™s substitution paid off well for him as his side regained control of the play while they maintained the pressure on Hilalâ€™s goal. Ledlum and Drammeh came close to doubling the lead in the 75th and 80th minute but were denied by Hilalâ€™s shot stopper, Maxime, who was careful not to concede for a second time.

Hilal became desperate for a goal and came very close to getting the score leveled in the 85th minute but were denied by LISCR FCâ€™s goalkeeper, Tommy Songo, who cleared the ball over the bar resulting in a corner. The missed opportunity was the last closest chance of the match as both teams failed to score until the end of the match.

The victory against one of Africaâ€™s giant didnâ€™t surprise LISCR FCâ€™s head coach, Manneh, who said he was pleased with the result.

â€œWe want to be champions. If you want to be a champion, you have to beat a champion and thatâ€™s what we did today,â€ Manneh said in a post-match press conference. â€œThe most important thing is that we got the three points. That was the score today and we are satisfied with the result.â€

â€œWe are doing very well but Sheku Sheriff did a wonderful job. Scoring that goal was a lot. From an impossible angle, nobody was expecting it to be a goal, but he has been doing it in training ground and he brought that to the game,â€ the LISCR coach said.

Meanwhile, Hilalâ€™s head coach, Sergio Farias, vowed to work harder and advance to the next stage of the competition. In a post-match conference, the Brazilian tactician said he had watched his opponents well and that he was going to prepare well for the return leg in Khartoum.

â€œNow, we know how the team plays. Itâ€™s a good team with [an] experienced squad,â€ he said. â€œThey know how to attack and also to defend. But now, we have some idea about the team, we will prepare well for the return leg. We have 90 minutes in Khartoum. Weâ€™ll try to qualify to the next stage.â€

LISCR FC may have won the first leg, but the Shipping Boys will need to avoid defeat in the return leg in Sudan to reach the first-round qualifiers. The return leg will be on Tuesday, February 20 at the Al-Hilal Stadium in Khartoum.

Tons of fans who turned out to watch Liberiaâ€™s first competitive match in months and the first international match to be played in Liberia under the leadership of former FIFA World Player of the Year were graced by the presence of Pres. George Manneh Weah. The former AC Milan star playerâ€™s presence was a blessing for fans who could not afford to enter the stadium. The chief patron of sports called for the â€˜Around the Fieldâ€™ section of the stadium to be opened to fans.