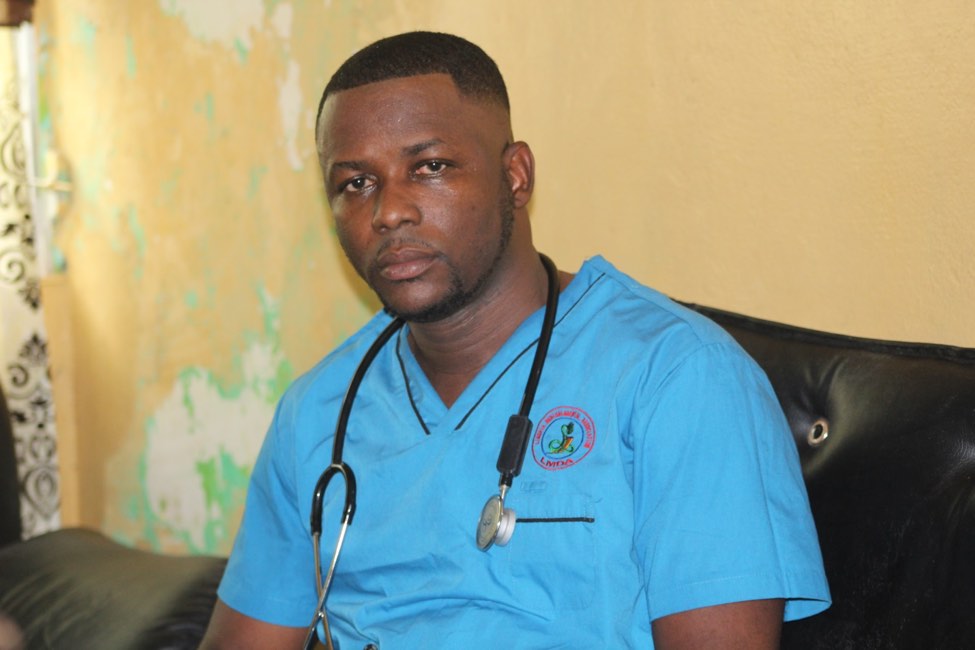 MONROVIA, Montserrado â€“ Dr. Jonathan Hart, the secretary general of the Liberia Medical and Dental Association, is calling on President George Weah to immediately dismiss Health Minister Wilhelmina Jallah for misleading him over the appointment of the chief medical officer at the John F. Kennedy Medical Center.

Before Weah made his appointment, a vetting committee headed by Nadu Cooper had been tasked with selecting the most qualified person for appointment. Five applicants had been shortlisted and reviewed by the committee, including Benedict Kolee, Cuallau Jabbeh Howe, Billy Johnson, and Sia Wata Camanor.

According to a leaked document, which has been authenticated by health officials familiar with the vetting process, Kolee was rated the highest with a score of 93.8, while Camanor obtained 57.7.

However, Camanor was the doctor named by Weah to the position.

The health minister said Kolee did not meet the requirements of being a medical doctor with post-graduate specialization: â€œTo put it simply, the nominee is still in school and didnâ€™t meet the first requirement.â€

Additionally, Jallah said there was a conflict of interest as one of the participants of the vetting process was listed as a reference by Kolee adding â€œKolee was dishonest about currently serving as the chief medical officer for Jackson F. Doe Hospital in Tappita as he was based in Ghana.â€

However, Hart said the law does not authorize Weah to appoint principal officers of the entity as â€œthe entityâ€™s act gives the board the sole responsibility to do such.â€

In an exclusive interview with The Bush Chicken recently, Hart expressed his disappointment and disagreed with the health ministerâ€™s decision to recommend Camanor for the position.

He argued that Kolee was never relieved of his post but was given a leave by the government to train to become a pathologist in Ghana.

â€œThe candidate met the criteria as advertised for the position of deputy chief executive officer,â€ he said.

Leaked documents that have emerged since show that the vetting committee selected Kolee to be the chief medical officer. In a letter dated July 16 to members of the JFK board, Health Minister Wilhelmina Jallah, who chairs the board, registered her concerns and disapproval of the committeeâ€™s recommendation of Kolee.

Following the vetting process, Hart explained that on August 2, all 13 members of the board convened a meeting and endorsed the committeeâ€™s recommendation of Kolee.

â€œJallah was encouraged to adhere to the boardâ€™s decision but refused and decided the forward Camanorâ€™s name to the president,â€ Hart said.

He argued that Jallah acted to ensure that the position went to her friend, Camanor, who was ranked last.

â€œIf Jallah is saying that the vetting process was marred by conflict of interest, why did she recommend her personal friend who was the major force behind her confirmation,â€ he asked.

He accused the health minister of appointing Camanor because of Camanorâ€™s effort to get Jallah confirmed at the Senate. Recommending Camanor for appointment was Jallahâ€™s way of rewarding her for the services rendered, Hart said.

Jallah was first rejected by the Senate because of public outcry over the death of a pregnant woman Desiree Fahnbulleh at the private clinic.

Before her second appearance at the Senate, Hart said Camanor served as a lobbyist for Jallah after being promised the job of chief medical officer.

Hartâ€™s statement suggested that senators were bribed to approve Jallah as health minister.

Hart said Camanor also served as a lead negotiator between the health minister and the family of the woman who had died at her clinic.

The LMDA secretary general said Jallah had made the promise of the job to Camanor because she thought she would be the one to make the appointment. However, the board has an application and vetting process.

He condemned Jallah for deceiving the president that the JFK board had agreed that Camanor was the most qualified person among applicants.

â€œThe president never had any knowledge as to what was happening, and this is the reason Iâ€™m calling on him to immediately dismiss the health minister for misleading him,â€ he said.

From the onset, Hart said he told Weah in a communication that Jallah was unfit to be the countryâ€™s health minister because Jallahâ€™s integrity and sincerity are questionable.

Hart recalled when the issue of the death of the patient occurred at Jallahâ€™s clinic, the Liberia Medical and Dental Council investigated the matter and recommended that the health minister reconcile with the bereaved family.

â€œJallah refused and said she never did anything wrong,â€ Hart noted.

Due to the refusal of the health minister to reconcile with the family, Hart said he informed the president that she was unworthy of heading the countryâ€™s health sector.

When The Bush Chicken contacted Larry B. Fahnbulleh, husband of the deceased patient via phone interview, he corroborated Hartâ€™s statements and said that Camanor had led a delegation to his residence to discuss with the family.

â€œCamanor was the one that created the corridor for Jallah to meet with my family,â€ Fahnbulleh explained.

When contacted, Camanor said she wanted to move on and start doing the peopleâ€™s work.

â€œThe confidence President Weah has entrusted in me, Iâ€™m focused on how I can actually justify such,â€ she said, during a phone interview.

Camanor noted that she could not stop people who disagree with her appointment from expressing themselves.

â€œYou cannot please everybody all of the time, but Iâ€™m trying to serve to the president, minister, the entityâ€™s chief executive officer, and the Liberian people,â€ she added.

Camanor admitted to having served as negotiator between the Fahnbullehâ€™s and the health minister, adding that she empathized with Jallah as a woman and a professional colleague.

â€œWhen I saw a senior colleague going through a lawsuit from the deceasedâ€™s family, coupled with mounting criticisms from the public, I was moved to stand by her,â€ Camanor said.

The Health Ministry, meanwhile, issued a statement dismissing claims that Jallah was involved in Camanorâ€™s appointment: â€œThe Ministry clarifies that at no time Dr. Jallah ever influenced the appointment of any government nominees least to mention Camanor as erroneously believed.â€

Hart, the LMDA secretary general, said if Jallah continues as health minister, there could be bigger problems in the health sector. He said the role of health minister requires an occupant with a character of integrity and sincerity, which Jallah lacks.

â€œThe life of every Liberian lies in the health ministry,â€ he emphasized. â€œThe controversy surrounding Camanorâ€™s appointment may not be visible, but it has created division among doctors in the country.â€

He noted that there continues to be debates and arguments among doctors over Camanorâ€™s appointment on social media chatrooms.

â€œNo doctor wants to come out and take the bull by the horn, and I will not be a sycophant,â€ Hart said.

He cautioned that, in his push against Jallah, he was not questioning Camanorâ€™s competency. However, he wanted the law to be followed.

â€œThe process that led to Camanorâ€™s appointment is illegal, unacceptable, and must be revoked,â€ he said.