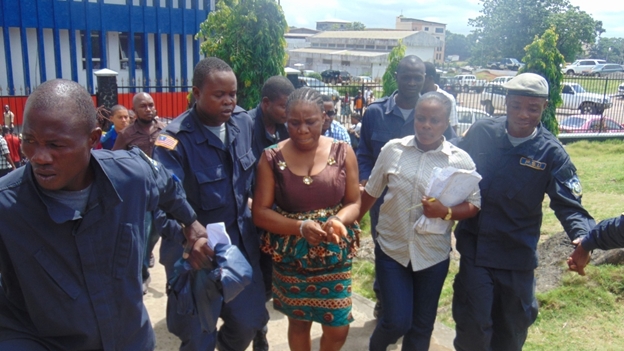 MONTSERRADO, Monrovia â€“ The Liberia National Police, LNP recently charged and sent to court for prosecution the publisher of the Women Voices Newspaper, Helen Nah, and her accomplice Joshua Osadagbonyi, an information technology technician at the United Bank of Africa, on charges of theft of property, aiding consummation of crime, criminal facilitation, money laundering and forgery.

According to the Liberia National Police charge sheet obtained by The Bush Chicken, defendants Nah and Osadagbonyi were arrested after police investigators established that they conspired and duped UBA out of US$33,100.

The Liberia National Police document said Osadagbonyi, who is Nigerian, disabled the Western Union server and transferred the money to Nah’s account and other institutions in Liberia, Ghana and Nigeria.

The Liberia National Police document quotes Osadagbonyi during preliminary investigation as admitting to the crimes.

The LNP investigation established that on March 12, Nah and Osadagbonyi were involved in several transactions. The LNP document stated that Nah instructed UBA through written communication to transfer US$35,187 out of the her account to a company in Virginia, USA intended to purchase printing equipment to be used by Nah. The LNP investigation revealed that on the same day, Osadagbonyi transferred US$9,000 from his Global Bank account and added US$3,000 to the existing amount of US$9,000, and deposited the same into the account at UBA owned and managed by Nah.

Nah told journalists that all charges against her are false. She said she is a married woman and does not know Osadagbonyi.

â€œThe bank is deliberately holding my US$35,000 for which the Liberia National Police is accusing me of,â€ Nah said. Nah alleged that her US$35,000 was stolen by an employee of the bank, whose name she failed to disclose.

She said she is prepared to challenge the matter through the court to prove her innocence. Nah and Osadagbonyi were sent to the Monrovia Central Prison after their lawyers failed to file a criminal appearance bond for their release.