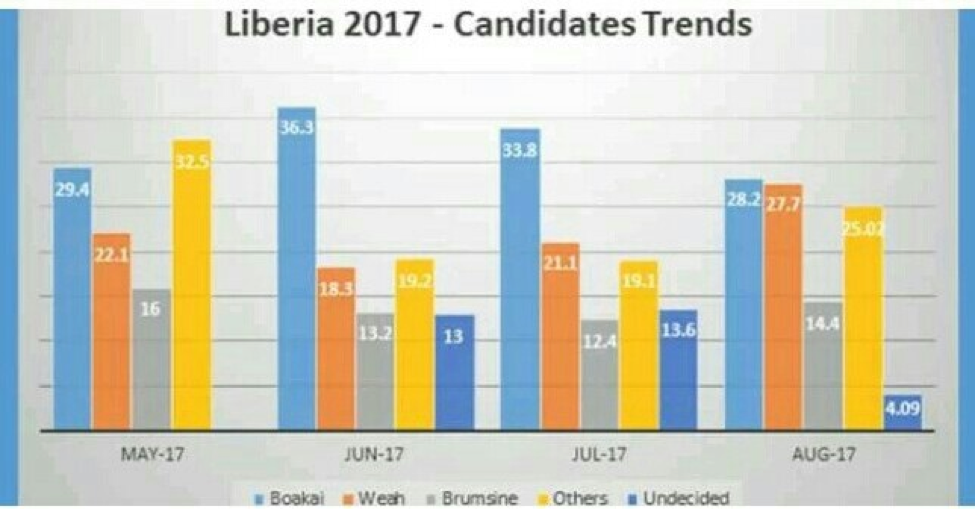 MONROVIA, Montserrado â€“ The local pollster, Liberia Holding Consortium has released its fourth report on the perception of voters for the pending October 10 elections.

According to the report, a total of 977 respondents participated in the survey, representing 35 population centers in all 15 counties. The survey was processed between August 25 to September 5, 2017, and had a margin of error of three percent.

Unity Partyâ€™s presidential candidate, Joseph Boakai took the lead with 28.2 percent of the total samples, followed by George Weah of the Congress for Democratic Change with 27.73 percent.

Charles Brumskine of Liberty Party acquired 14.4 percent of the samples, followed by others, including Prince Johnson of the Movement for Democracy and Reconstruction, Mills Jones of the Movement for Economic Empowerment and All Liberian Partyâ€™s Benoni Urey.

The report revealed respondentsâ€™ choice of president varied with select reflections from each county.

Boakai took the lead in Grand Cape Mount from Weah with 37.14 percent but lost the lead in Sinoe and Margibi to Weah.

According to the report, Weahâ€™s strength in Montserrado increased to 38.9 percent from 26.33 percent in the previous report.

Brumskine improved his standing in Grand Bassa, which is generally known to be his home county, to 54.9 percent. However, the survey said he slumped in neighboring River Cess to share the lead with Weah at 25 percent.

Unlike its previous poll in July, the pollster indicated that the number of undecided voters reduced to 4.09 percent.

Many citizens (60 percent) are also against re-electing their lawmakers, the report revealed.

Citizens who participated in the survey also suggested a wide range of priorities that they believe the government should work within helping them accomplish their desired Liberia.

While the suggestions varied from county to county, the highest priority was placed on education, while other choices included, jobs opportunity, road and infrastructure, health, agriculture, and the economy.

According to the pollster, the survey was designed to cover several scenarios, including mainly populated areas, commercial communities, concessions, rural areas, and municipalities, among others.