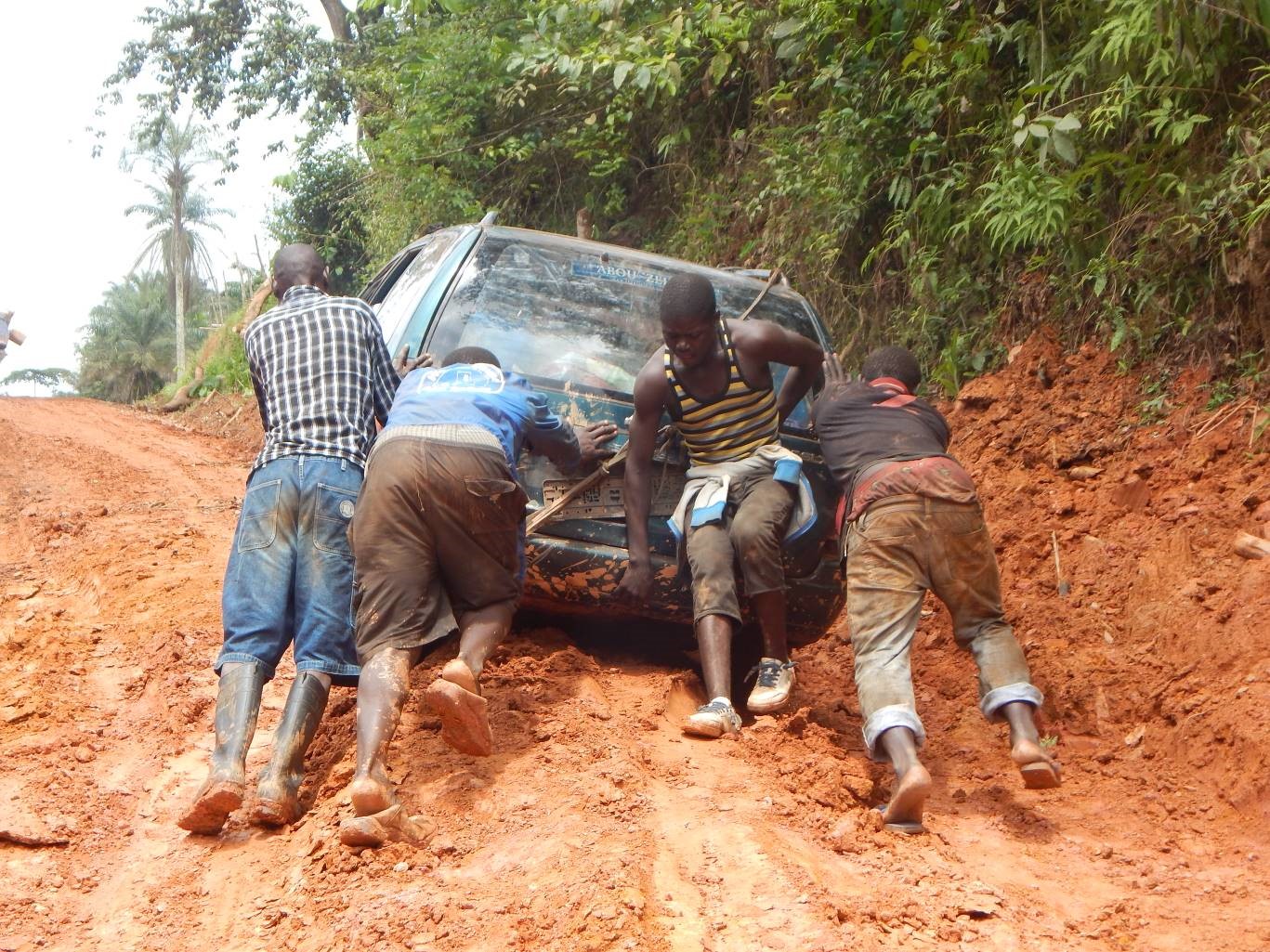 SALAYEA, Lofa â€“ The continuous downpour of torrential rains in Lofa County is worsening the Gbarnga to Mendikorma Road that has already been in terrible shape for several years.

Marketers and other travelers have described an even tougher than usual commute due to the substantial amount of mud and deep ditches on the road.

In Zorzor district, residents said the roads were so bad that some vehicles had to spend one to two weeks on the road before reaching their destination.

Yamah Konneh, a businesswoman in Gbanway Town, told The Bush Chicken that she and others traveling from Voinjama to Monrovia with perishable goods had to spend one week and three days on the road.

For every ten to twenty minutes drive on the road, she said the truck transporting her goods would either get stuck or have to wait for several hours to find a better passage.

Speaking out of frustration, Konneh said most of her eggplants, peppers, and dried meats rotted on the trucks because of the appalling condition of the roads.

She and other marketers were now compelled to ride in smaller vehicles with less capacity because trucks became stuck more easily.

â€œEven with the smaller vehicles, we [still find passage difficult] because whenever we get to a point where a truck is stuck in the mud, we wait for several hours or days [behind the truck],â€ Konneh added.

Complicating the matter, along the road at Richard Village, residents have been instructed to block the entry to the village to not to allow smaller vehicles passage when trucks get stuck in the mud and block the road.

The village sits adjacent to the road, and travelers often attempt to veer off the main road to seek passage through the village, where road conditions are better.

Edward Davis, a resident of the village, said the measure to block the road was taken out of concern for the safety of children, who could get hit by passing vehicles.

On one occasion, after drivers pleaded for several hours, Davis removed the barrier for smaller cars to make their way through the village.

â€œIâ€™m only allowing vehicles passage in the village because of humanitarian feelings,â€ Davis said.

In another town along the road, Principal Jerry Geeteh of the Gbanway Public School said it was disheartening to see drivers using the school premises as an easy passage. A passenger walks along a path near the Gbanway Public School after disembarking from a vehicle stuck on the main road. Photo: Zeze Ballah

Recently, a delegation of Arab lenders visited Liberia to assess the Gbarnga to Mendikorma road, which connects Lofa with the rest of the country.

They toured the road ahead of the signing of various financial agreements later this year.Â

The estimated cost of the road, according to Liberiaâ€™s Finance and Development Planning Minister, Amara M. Konneh is US$430 million. It is expected to be implemented in two phases, beginning with work on a project from Gbarnga, Bong County to Konia, Lofa County at US$184.7 million.

â€œTo date, the Ministry has secured financial commitment in the amount of US$72 million from the majority of our lenders for financing [the first phase] of the project.â€ Minister Konneh said.

He said the region along the Gbarnga to Mendikorma Road is considered part of Liberiaâ€™s agriculture belt. When paved, he expects it will improve accessibility plus connectivity of roads and bridges between Bong and Lofa, thus reducing transportation costs.

â€œThe project would increase economic activities, with emphasis on agribusiness,â€ he said. â€œThat would ease access to markets, and would also significantly improve access to other social services facilities including basic health care centers and schools, support gender development and ultimately reduce poverty.â€

According to the Konneh, the road, which runs through the rainforests of Bong and Lofa, has drawn growing interest among investors for large-scale commercial farming.

The investment is in line with the Agenda for Transformation, which is the medium-term development plan for the country.

On behalf of the delegation, Faisal M. Al Kahtani, a civil engineer for the Saudi Fund for Development, thanked the Government of Liberia for the reception.

Sharing
Tags Amara Konneh
Contributions to The Bush Chicken are not tax deductible.