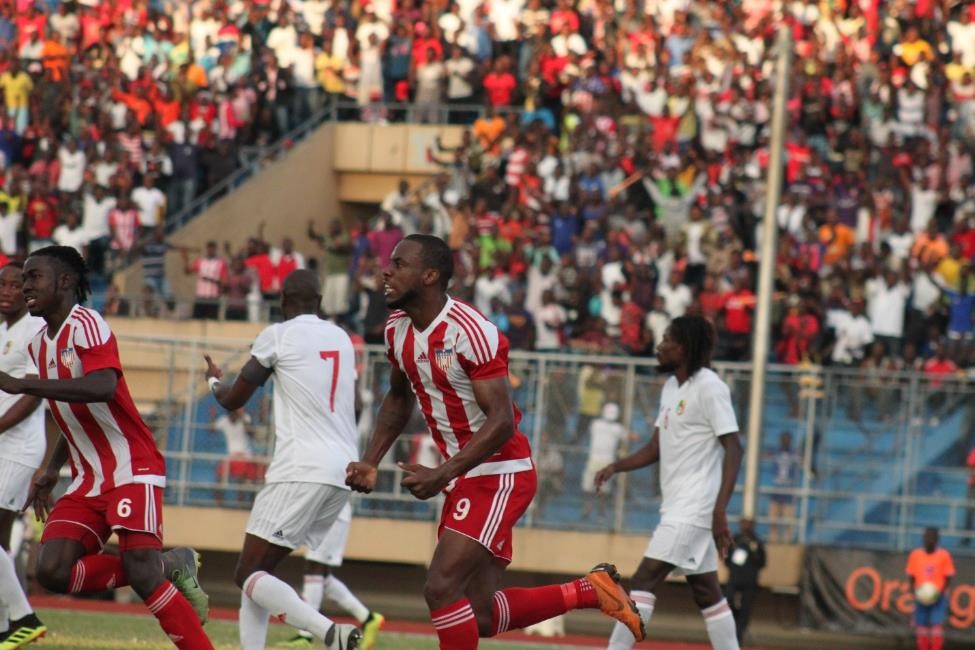 PAYNESVILLE, Montserrado â€“ Liberiaâ€™s national football team has earned a 2-1 win over Congo at the Samuel Kanyon Doe Sports Complex in an attempt to qualify for the 2019 African Cup of Nations. The win ends a three-game winless streak.

Lone Star claimed the narrow victory over their counterparts on Tuesday, October 16, five days after falling to an embarrassing 3-1 defeat away in Brazzaville. Teah Dennis and William Jebor got the goals for the Lone Star while Prince Ibara got the lone goal for the visitors.

With Lone Star losing 3-1 in Brazzaville and lying bottom of their group, the match against Congo on Tuesday which was a must win for Head Coach Thomas Kojo. The disappointed Lone Star fans did not show up in large numbers as they have in previous games and the match began with a relatively empty stadium until President George Weah ordered free entry into the stadium.

After three games without a win, Liberia needed the three points to restore their hopes of qualification to the 2019 African Cup of Nations that will be hosted in Cameroon. Kojo made five changes from the team that lost in Brazzaville on October 11 and placed the 17-year-old Ashley Williams in goal, ahead of Spanish-based goalkeeper, Boison Wynney.

Lone Star stormed the pitch with a goal of winning, managing to score two goals in 13 minutes to take an early lead before the few fans.

Following their dominance of the possession in the opening minutes, they got rewarded with an eighth-minute lead which was given through Barrack Young Controller Football Clubâ€™s center defender, Teah Dennis. Dennis headed from LPRC Oilersâ€™ Aloysius Simujlaâ€™s cross from a set piece to put Lone Star ahead.

The early lead appeared to have brought confidence to the team on the pitch as they went on dominating the play and creating some chances. Five minutes after Teah Dennis had given Liberia the lead, the teamâ€™s goal-scoring machine, William Jebor, got his name on the score-sheet to double the lead. Jebor made no mistake in reaching the ball at the back of the net after beautifully receiving Anthony Lafforâ€™s cross from the right side of the pitch. With just 13 minutes in the match, Lone Star was up by two goals, but more was expected from the team that conceded late goals in their previous two 2019 African Cup of Nations matches. However, their two goals lead didnâ€™t last long with Congo pulling one back just one minute after Jebor had doubled the lead.

Algerian League One striker Prince Ibara made no mistake in correcting an error by Liberian goalkeeper Ashley Williams. The LISCR FC youngster failed to clear a crossed ball out of his danger zone, and Ibara was rightly positioned to get it at the back of his net.

With three goals scored in the opening 15 minutes, it was widely expected that the game would be a goal feast game with Lone Star creating more chances and Congo making clever use of their few chances. Mamelodi Sundownsâ€™ forward Anthony Laffor came close to adding Lone Starâ€™s third in the 44th minute with a shot that was saved by Chancel Massa, goalkeeper for Congo.

From the edge of the penalty area, Laffor was beautifully served by William Jebor but saw his shot thrown out for a corner. Neither side was able to score despite creating the chances as Lone Star went to the break with the lead.

The 2-1 lead didnâ€™t look satisfactory to Kojoâ€™s team that returned from the break still determined to get the goals rolling. Fans were on their feet just 26 seconds in the second half when Laffor made a diving header on goal. A beautiful diving header by Laffor was again denied by Massa who kept his teamâ€™s hope alive.

Liberiaâ€™s early minute threat in the second half sent a strong warning to Congo that put themselves together quickly to get the score leveled. Ibara led the attack for the Congolese, who struggled to get clear chances on goal after being heavily prevented by a stubborn Liberian defense that worked excellently in the match.

However, they didnâ€™t give up as they continued to push for a goal, which forced Kojo to make a substitution by bringing in defensive midfielder for striker Kpah Sherman. However, all the efforts by Congo in trying to get the score leveled failed. Lone Starâ€™s attempt to add their third goal also didnâ€™t materialize as the match ended 2-1 in favor of Liberia. It was a much-needed victory for Liberia to keep alive their hopes of qualifying. Kojo praised his boys after the match but encouraged them to do better.

â€œWe won today. Yes, itâ€™s a good result for every one of us. We are excited, but the victory doesnâ€™t mean weâ€™ve achieved our goals. One win in four games â€“ we have a lot to do as a team to improve,â€ Kojo said after the match.

Liberiaâ€™s win over Congo was the first for the senior national team since football legend Weah was elected as the president. This was also the first victory under the new administration of the Liberia Football Association headed by Mustapha Raji and the first also for Thomas Kojo since being reappointed as head coach of the national team in July.

Liberia remains at the bottom of Group G but with four points, four less than group leaders, Zimbabwe, and one point less than second-placed D.R. Congo. Liberia is tied on points with third-placed Congo. The Lone Star must win their remaining two matches against Zimbabwe and D.R. Congo if they are to qualify for the Cameroon 2019 Africa Cup of Nations.