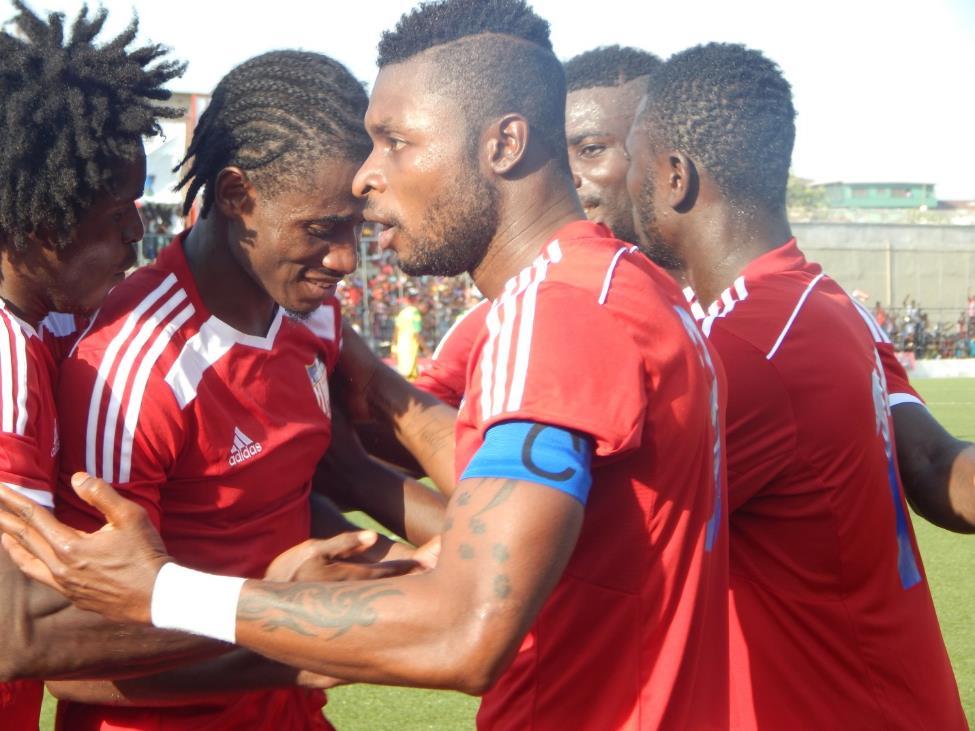 MONROVIA, Montserrado â€“ It was another disappointing performance from the Lone Star of Liberia as they succumbed to pressure against a Togolese team. The Sparrow Hawks made clear their intention to win after coming from two goals down to earn an important point away from home in a 2-2 draw at the Antoinette Tubman Stadium.

The match was part of the fifth round of qualification for the Gabon 2017 Nations Cup. A win for the Lone Star would see them qualify for their third African Nations Cup finals.

Less than an hour to the game, police actions triggered unrest when they threw tear gas canisters at spectators outside the stadium, just about the time the Lone Star had arrived. This affected defender Solomon Grimes, who had to get quick treatment. More than 100 spectators were also hurriedly taken out of the pitch, mostly in stretchers. A spectator rushed to the ambulance. Photo: T. Kla Wesley

For the match itself, the Lone Star announced themselves as early as the fourth minute when Gizzie Ducan Dorbor, who plays for the Israeli second tier club Hapoel Afula, struck from outside the penalty area to beat Togolese showstopper Agassa Kossi. The goal sent the crowd wild at the jammed packed stadium. Dorborâ€™s goal produced early fireworks in the game, as Togo took control of the match, but tenacious defending by Liberia prevented an early equalizer from the Togolese attack led by former Real Madrid, Arsenal, Manchester City and Tottenham striker Emmanuel Adebayor. Matthieu Dossevi and Floyd Ayite also proved to be dangerous as they caused trouble for Liberia.

Togo was awarded a free kick from a dangerous position and Ayite’s effort hit Liberiaâ€™s goalkeeper Tommy Songoâ€™s wood-work. A goal was scored as a result of a follow-up from Ouro Akoriko. However, it was canceled by the Egyptian referee who ruled it as an offside.

Togo dominated the entire first half but failed to get a goal. The Lone Star missed several chances as the first half ended 1-0 in favor of Liberia.

Back from recess, Togo resumed with mounting pressure on Liberia while in search of their equalizer, but it was Liberia that doubled the lead through William Jeborâ€™s spectacular overhead kick in the 54th minute.

At this point, many thought the game was over as the ecstatic crowd began to sing, “We are on our way–to the promise land–“. But Togo refused to lie down as they began to once more dictate the rhythm of the game, and it looked like they would score. Alvin McCornell, who came on as a second-half substitute for an injured Dorbor, was sluggish at left back, causing Anthony Laffor to drop deep to help the Barrack Young Controller defender, whose main role in theÂ defense was at center back. Adebayor, who was often bundled by the hostsâ€™ back line, dropped deep in, using himself as a decoy as Ayite took the mantle of attack.

Ayite would then head in a cross from McCornell’s position in the 69th minute as the weary Tommy Songo failed to stop the ball. It was game on for the Togolese. The Lone Star players appeared visibly tired. Theo Weeks Lewis and Sam Johnson were in slumber and Al-

It was game on for the Togolese.

The Lone Star players appeared visibly tired. Theo Weeks Lewis and Sam Johnson were in slumber and Al-Seny Keita was brought on for Dioh Williams.

After persistent and incessant attacks, Kodjo Laba in the 83rd minute leveled the score by finishing a corner when he made the run that eluded the Lone Star back line.

The result keeps Liberia on top of the table with 10 points, level with second place Tunisia which beat Djibouti 3-0. The result also means that Group A will be decided in the final round.

Liberia needs a win away at Tunisia in their final group game and hope underdog Djibouti can whip the Sparrow Hawks of Togo.