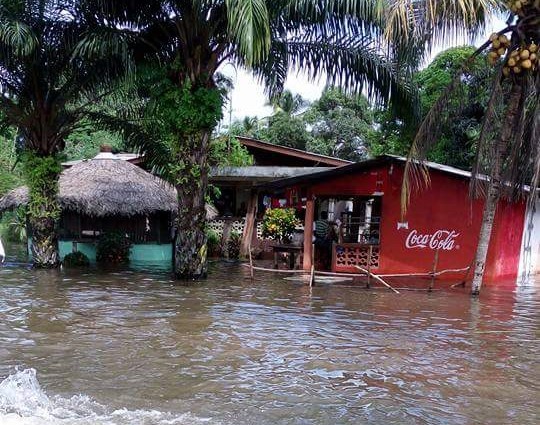 UNIFICATION CITY, Margibi â€“ Joeblow Town and other communities in Margibi have been inundated by widespread flooding following a heavy downpour of rain starting on Tuesday, according to reports from local journalists.

Local journalists in the areas have reported that residents of the affected homes are relocating to the homes of relatives while others are now homeless because they have nowhere to stay. The chief for Joeblow Town, Joel Zangar, told The Bush Chicken in a telephone interview that the flood is the worst he has ever witnessed in the town.

“Even in the past, the deadliest incidents of flood we experienced were in 2005 and 2013, but this is worse,” Zangar said.

According to him, similar to another flooding last year, residents woke up early on Tuesday morning to find water entering their homes. The water level has continued to increase.

“Only a very few cars like trucks and strong NGO cars are forcing their way,” he said. The government of Liberia has announced a partial closure of the main road leading to RIA. Deputy Information Minister Isaac Jackson said the Liberia National Police took the decision based on the flooding in Joeblow Town, two miles away from RIA.

Jackson said the LNP is advising commuters and the public to use the 15th Gate route to access the airport or Harbel.

He also announced that authorities of the Ministry of Public Works would carry out studies on the flooding. Jackson made the pronouncement at a Ministry of Information press briefing.

Zangar, Joeblow Townâ€™s chief, said Margibiâ€™s assistant superintendent for development, Joshua Robinson, had visited the scene in Joeblow Town this morning and promised to discuss the issue with the County’s Superintendent and other officials.

He also added that the Red Cross had sent an assessment team to the community yesterday. In nearby Unification City, residents say several houses are already affected. The mayor of the city, Roseline Siah Davis, is currently in the United States to attend the Convention of the Robertsfield Citizens Association of America. Local representatives on the ground have not commented on the matter.

A local journalist in Kakata has also reported that parts of Kakata have flooded. James Mychenburg said several communities are also affected, and residents are seeking shelter in nearby homes. He said communities affected by Tuesday’s rains are Bassa Community, Dennisville, Benila, World Bank, and 14th Road communities. He disclosed that over 200 houses are affected in these communities.

Mychenburg, however, said that Tarr Sackie, who is Margibiâ€™s county inspector and head of the county’s Disaster Management Team, has promised a quick intervention for the affected communities.

Meanwhile, the state broadcaster ELBC reported that an unidentified man has drowned. ELBC also quoted Margibiâ€™s second district representative, Ballah Zayzay, as saying that some students in the area were prevented from sitting their WAEC exams, which is taking place this week.

County Superintendent John Buway is also calling for help to arrest the flooding, according to ELBC.