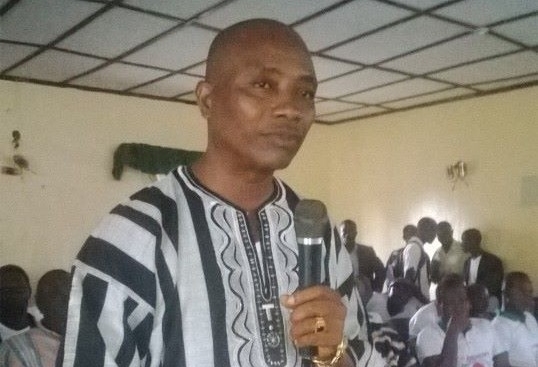 HARBEL, Margibi – Citizens in Margibi are requesting Senator Jim Tornonlah to accept the proposal to cut down his salary and benefits.

The citizens said the pay cut would help reduce the declining rate of the economy and contribute to development.

Recently, three members of the Liberian Senate petitioned their colleagues to review benefits of public officials and discuss possibilities for a 25 percent reduction.

Gbarpolu senator and president pro tempore of the Liberian Senate, Armah Jallah; Grand Bassaâ€™s Senator Nyonblee Karnga-Lawrence; and Bomiâ€™s Senator Morris Saytumah made the proposal as an austerity measure against the declining economy.

Jallah, Karnga-Lawrence, and Saytumah named the president, vice president, legislators, the chief justice and associate justices of the Supreme Court, ministers, deputy and assistant ministers, heads of public corporations, directors and commissioners as officials who should be affected by the reduction in salaries and benefits.

The proposal was generally welcomed by the public, but Tornonlah and few others including, Nimbaâ€™s Senator Prince Johnson rejected their colleaguesâ€™ recommendations.

Johnson angrily walked out of plenary after he failed to stop discussions on the floor concerning the proposal.

Johnson, who is also the political leader of the Movement for Democratic and ReconstructionÂ­ and a presidential aspirant, argued that his salary alone would not build Liberia amid the massive corruption in the government led by the Unity Party.

He suggested that President Ellen Johnson Sirleaf must first make available the US$13 million that allegedly went missing at the National Oil Company of Liberia.

â€œI have made too many sacrifices,â€ he concluded.

For his part, Tornonlah said a cut in the benefits of lawmakers would not be possible, noting that he needs the allowance to properly lead.

â€œFor me in Margibi, I need the allowance to carry to my people,â€ Tornonlah said.

While he welcomes the proposal, Tornonlah said, the contents of the documents go too far.

However, citizens told The Bush Chicken on Friday in Harbel that Tornonlahâ€™s comments were insincere and provocative.

Omodu Mollay, a youth in Harbel clarified that the Senator has remained very inaccessible since he was elected to the position in 2014.

Mollay said at no time has the senator shared his benefits with the people of Margibi.

â€œI think he was referring to his family, and not the struggling citizens of Margibi,â€ he added.

He argued that while the budget year was in full swing and implementing the proposal would be difficult, he wants the senator to join his colleagues in support of the pay cut during the next budget year.

Thomas Nyumah, a school teacher, also considered the senatorâ€™s comments to be condescending.

â€œThe senator must unconditionally accept the pay cut proposal, because it is in the interest of the country, especially those he represents,â€ Nyumah said.

He said the senator has not been vocal on national debates at the Senate and has at the same time refused to visit his constituents. â€œAt no point in time has he even made a report to us on his work at the Legislature. He is an invisible senator,â€ the school teacher added.

In April last year, the Institute for Research and Democratic Development in its 2015 legislative performance report grading lawmakers of the 53rdÂ National Legislature, ranked Tornonlah poorly in plenary participation.

The report ranked specific lawmakers on various aspects of their performances and highlighted overall concerns with the institution.

Weeks following the release of the IREDDâ€™s report, the senator came under strong criticism by citizens for underperformance. They called on him to make his constituency report to the county.

Although the report is not required by any law, it is a tradition that some lawmakers follow to brief their constituents on their accomplishments and activities in the legislature.

However, the senatorâ€™s office has declined to state a date when the senator will make a constituency report to citizens.

Tornonlahâ€™s political officer, Mark Nuah, said Tornonlah had spent only one year in office and as such, pressure coming from some Margibians for the senator to make report was not realistic.

The senator on a radio show on Stone FM in Harbel is also on record telling citizens that he had just come from court and spent a lot of money during the elections, thus explaining that he needed time to adjust and understand the workings of the Legislature.

Tornonlah replaced Clarice Jah after being elected during the 2014 Special Senatorial Election.

His induction to the Senate was delayed for about four months because of a stay order issued by the Supreme Court following complaints of vote rigging.

Saah Richard Gbollie of the National Patriotic Party and Dao Ansu Sonii of the Congress for Democratic Change, who both contested in the 2014 election, alleged that the election in Margibi was marked by fraud and malpractices.

Gbollie and Sonii later dropped their case against the National Elections Commission.

Liberia, which is considered one of the worldâ€™s poorest countries, has a budget of US$600 million with a GDP per capita of US$456. More than half of its 4.5 million people live below US2.00 a day.

Access to better infrastructures and basic services delivery are very poor. In addition to the 14-years of civil war, the outbreak of Ebola in 2014 exposed the weaknesses in, especially the countryâ€™s health system.

However, its lawmakers are currently among the highest paid around the world with annual salaries and benefits of US$170,000 to US$210,000 per year.

In the US, where the federal governmentâ€™s budget is US$4.2 trillion, a congress member earns US$174,000 per annum.