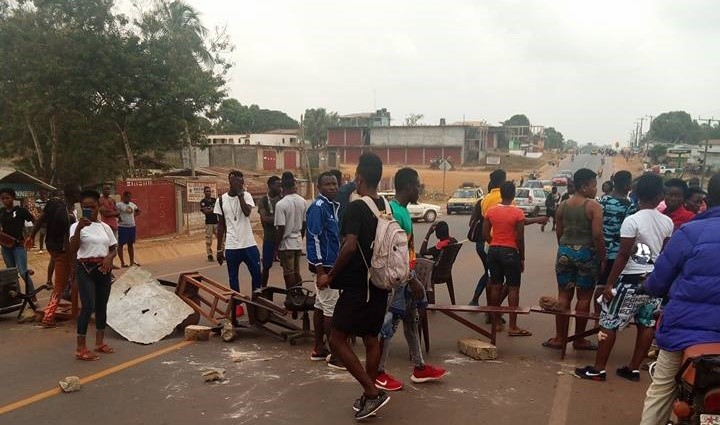 KAKATA, Margibi â€“ Players of the Margibi football and kickball teams in the 2018/2019 National County Sports Meet have staged a protest in Kakata to demand that county authorities provide them payments they are owed for their performance in the sporting tournament.

About 40 members of the teams stormed the offices of the county administration, impeding normal working activities on Wednesday, March 6. The protestors also set up roadblocks on the road to the administrative building and at the Du River Bridge, before the entrance of the city of Kakata for hours.

Otis Tarnue, the football teamâ€™s deputy coach who also served as spokesman for the protesting players, said they were frustrated over the failure of the countyâ€™s leadership to settle their debt, even though it has been nearly two months since the end of the competition, with Margibi taking second place in both the football and kickball categories.

Tarnue said despite several attempts to engage with the county leadership for a resolution, Margibi leaders have continued to make failed promises about settling the teamsâ€™ arrears.

â€œThey have called [us] on three different occasions, and whenever we came, they gave us excuses and we had [to] exercise restraint because of the sake of our beloved county,â€ he said.

â€œCan you imagine, they texted us our phones that on the fifth of March they will pay us and even hold a dinner for us. But to our surprise, we came, but to no avail â€“ thatâ€™s why you see us protesting today.â€

In addition to owing each football and kickball players US$200 and US$150, respectively, Tarnue said the county also owes technical officials of both teams and has also refused to pay despite several promises to do so. As a deputy football coach, he claimed that the county owes him US$850 in unpaid compensation.

On March 5, a day before the protest, the county made a written commitment to settle all its obligations to the players and the technical officials on or March 18, 2019.

â€œThe county administration of Margibi do hereby commit herself of all financial obligations of both the football and kickball teams along with their technical staff on or before the 18th of March 2019,â€ the note read.

â€œFailure to do so should lead the players to legal action,â€ added Korboi Weedor, the administrative assistant to Margibiâ€™s Superintendent Jerry Varnie, who signed on behalf of the county administration.