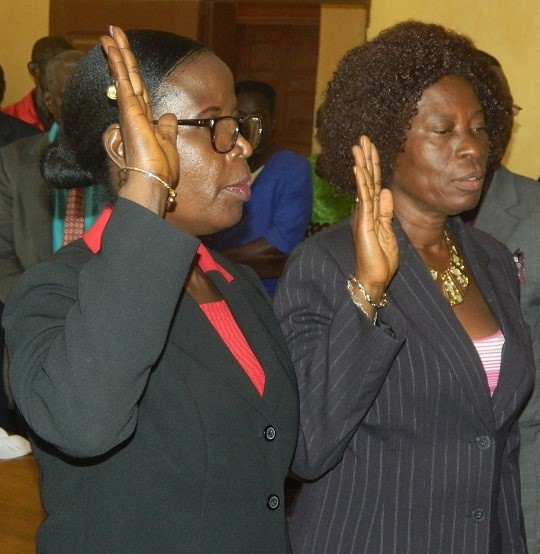 KAKATA, Margibi – The Former Assistant Superintendent for Development of Margibi has been formally inducted as the new Stipendiary Magistrate of the Kakata Magisterial Court.

Victoria Duncan was inducted along with the Stipendiary Magistrate of the Roberts International Airport Magisterial Court, Cecelia Rogers, on Tuesday, February 9, 2016 in Kakata.

Duncan recently resigned as Assistant Superintendent for Development in Margibi. Since her resignation, the Superintendent of the county, John Buway, has not officially commented on the situation.

Duncan was appointed as Assistant Superintendent for Development along with Buway by President Ellen Johnson Sirleaf on March 19, 2012. She was defeated as a representative candidate for the third district of Margibi during the 2011 elections.

While presiding over the development office of Margibi, Duncan earned a first law degree from the Louis Arthur Grimes School of Law at the University of Liberia. She was later admitted in into the Liberia Bar Association to practice the profession as an Attorney at Law.

Prior to the elections, she also resigned her position as Superintendent of the Monrovia Consolidated School System or MCSS. She has also served the Ministry of Education as Margibi County Education Officer after leaving a classroom teaching job with Firestone Liberia.

Speaking at the induction ceremony, a Supreme Court Associate Justice challenged the two new Stipendiary Magistrates to use their authorities wisely. He stressed the importance of the local court, adding that, “the way magisterial court conducts itself can either inspire public confidence in the justice system or break the public trust altogether.”

According to him, public confidence will further be achieved by the quality of service that will be offered to those who come before the court.

He condemned too many issuances of writs of arrest, noting that it is mostly a strategy to generate bond fees that ends up in the pockets of magistrates.

He encouraged the magistrates to instead issue summons to establish the magnitude of cases before serving writs of arrest.

Also speaking at the ceremony, Rogers praised the Chief Justice of the Republic of Liberia for the confidence imposed in them to serve in the position of Magistrates.

“We promise to do our best to merit this confidence by dispensing justice impartially,” she said.

1 day ago by Kelvin Kollie