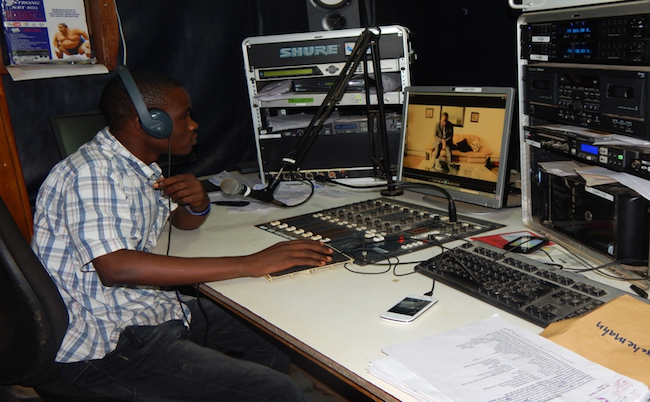 HARBEL, Margibi â€“ A media blackout imposed by the Margibi Journalist Association on the countyâ€™s leadership and its activities has entered its third week without a resolution.

Media houses in Margibi had announced a blackout on the coverage of all activities of the county legislative caucus and local administration for their failure to make allotments to community radio stations operating within the county during the recent county council sitting [Full disclosure: The Bush Chickenâ€™s two correspondents in Margibi are also taking part in the blackout].

The decision was made after media personnel failed to convince delegates at the council sitting to include community radio stations in the 2018/2019 county social development fund allotment.

A motion by delegate Vamuyan Konneh, an official of the ruling Coalition for Democratic Change in the county, to allow funding to the media institutions was denied by the countyâ€™s fourth district representative and chair of the legislative caucus, Ben Fofana, who presided over the sitting.

Minutes after their concerns were denied, journalists covering the event immediately withdrew their gadgets from the podium where they were recording and walked out of the sitting.

The managers of radio stations in the county also officially announced the media blackout during a simulcast interview on their stations. The radio managers announced they would continue their media blackout until authorities of Margibi committed their support to the local media.

Emmanuel Degleh, manager of Classic FM and president of the Margibi Journalists Association, said the media managersâ€™ action will only be discontinued when the countyâ€™s leaders meet their demand [Disclosure: Degleh is a Bush Chicken correspondent].

â€œFor too long, authorities in the county have shown a â€˜donâ€™t careâ€™ approach to media institutions in the county,â€ he said.

â€œIt is now time that our leaders follow the examples of neighboring counties. Nimba and Bong counties just ended their council sittings with allotments for the media.â€

The blackout is also affecting national radio programs that are regularly relayed on the community radio stations in the county, including ELBC and Truth FM news.

In Margibi, the only allotment made to radio stations was when the countyâ€™s fifth district representative, Emmanuel Nuquay, headed the House of Representativesâ€™ Committee on Ways, Means, Finance, and Development Planning and included his private radio station, Gbarsu and Radio Joy Africa, which also promoted his political campaigns.

Meanwhile, it is not yet clear whether the coverage of the upcoming National County Sports Meet will be affected by the media blackout in Margibi as the county will host a group stage in the competition.

But the matter seems to be far from being resolved despite a recent meeting convened with the local media managers by Fofana and the countyâ€™s superintendent, Jerry Varnie. The blackout is the longest so far to be imposed by the local media. A previous blackout was instituted when Senator Oscar Cooper reportedly insulted members of the local media. The action was, however, abandoned following an apology from the senator.

Margibiâ€™s county information officer, Joe Benson, has described the blackout as a serious embarrassment to the leadership of the county.

â€œUndisputedly, the county leadership sees the media as a strong partner in its information dissimilation. All I hope for is an amicable resolution in moving forward,â€ Josiah said in an interview.